There is currently a lack of existing infrastructure available for investment in Australia, which may explain why investors have been queuing up for the opportunity to take on the majority stake in Tasmania’s Hobart Airport, which is being surrendered by Macquarie.

There is plenty of interest, mainly from Australian superannuation funds, with foreign representation limited to Vinci Airports.

The lack of foreign interest, apart from that shown by Vinci, may be explained by the relatively small size of the facility and a cap on foreign investment levels. The airport is subject to a 49% cap on foreign ownership, which may make it difficult for larger offshore buyers, unless they are prepared to take a minority interest alongside a local partner.

Some of those foreign firms that did show interest are operators as well as investors though (as is Vinci), and regulation may be dissuading organisations that would be beneficial to the airport in an operational capacity.

The economy is not a factor in any investment decision – at least, not for now

Australian investors – mainly pension and infrastructure funds – have a disproportionate representation in the airport sector in the rest of the world, whereas there is scant representation from external investors into the sector in Australia itself.

This is highlighted by the disclosure of the potential investors for Macquarie Group’s (Macquarie also being Australian) 50.1% majority stake in Hobart Airport in Tasmania. Apart from France’s Vinci, all the other organisations that have expressed concrete interest are Australian.

The state of the Australian economy is not a reason for external lack of interest, at least not yet.

For nearly two decades up till 2017 Australia benefitted from a dramatic surge in trade. The economy experienced continuous growth, there was low unemployment, inflation was contained, and there was very low public debt and a strong and stable financial system.

However, since 2018 the country has faced a range of growth constraints, mainly driven by the sharp fall in global prices of key export commodities. Demand for resources and energy from Asia, and especially China, is growing at a slower pace and sharp drops in export prices have impacted growth.

Vinci heads up interest from abroad but is on its own

This month Vinci Airports was shortlisted to acquire Macquarie Group's stake at Hobart.

Other bidders include IFM Investors, QIC, UniSuper and a joint bid by the superannuation funds CBUS Super and HESTA. The sale is valued at up to AUD500 million (USD350 million). Rothschild is also understood to be supporting Vinci in its acquisition bid.

The sale of Macquarie’s stake was reported in a recent edition of the Blue Swan Daily, which is published by CAPA:

In the event, only two of these appeared on the shortlist (IFM and QIC), together with UniSuper, and two new entrants to the sector, CBUS and HESTA.

AMP Capital was interested early on but has since dropped out.

Other organisations that were rumoured to be interested in the opportunity – New Zealand’s Morrison & Co (Infratil), Spain’s Ferrovial and the Schiphol Group, which has a stake in the leaseholder at Brisbane Airport – are believed now not to be pursuing it.

Vinci is well known, having investments or management contracts at more than 50 airports worldwide.

On the other hand, only six of those airports are in Asia Pacific: three in Cambodia, where Vinci is long-established, and three in Japan in a joint venture with that country’s Orix Corporation.

So an investment in Australia might even be considered as risky as the concession Vinci took on at Belgrade’s Nikola Tesla airport earlier this year, except that large-scale investments are not required as part of this deal.

Of the others on the shortlist, IFM Investors is possibly better known for its investments in Europe (Manchester Airports Group, Flughafen Wien) than for what it has in Australia, but that latter portfolio is impressive: eight airports from Perth on the west coast to Darwin in the north, Brisbane in the east and Launceston in the south.

QIC is the investment arm of the Queensland Government to manage its long term investments and is now the third largest institutional investment manager in Australia.

QIC Global Infrastructure was established in 2006 and manages approximately USD6.8 billion of infrastructure assets.  It is an investor in Brisbane Airport Corporation Holdings, with directorship. In Mar-2019 it took another plunge into the dark when it acquired, together with Dutch pension fund APG and Swiss Life, Macquarie’s 36% stake in the Brussels Airport Company.

QIC looks for a large population catchment area supported by population growth when considering airport investments in Australia. That isn’t really the case in Tasmania, where the entire population is barely more than 0.5 million.

UniSuper is yet another Australian superannuation fund that provides pension services to employees of Australia's higher education and research sector and it has been a regular investor in Australian airports since the late 1990s.

In Mar-2015 UniSuper acquired 40 million Sydney Airport shares from the Public Sector Pension Investment Board of Canada under a USD166 million trade agreement. The acquisition increased UniSuper's stake in the airport to 14%, though it was already Sydney Airport's largest shareholder, with a 12.6% holding. It is also an investor at two Adelaide airports and at the Gold Coast airport.

This transaction also introduces two new entrants to the crowded sector and both of them, again, are pension funds.

CBUS Super is one of Australia's largest public offer industry superannuation funds. Established in 1984 for the construction, building and allied industries, CBUS has more than 777,000 members and manages more than AUD50 billion of members' funds. In Jun-2019 CEO David Atkins spoke about diversifying the investment strategy.

So, similarly as an industry fund is HESTA (its strapline is, “We’re an industry fund…yep, one of those!”). It is a pension fund for workers in the health and community service sectors and has AUD46 billion in funds under management.

Neither CBUS nor HESTA has industry experience, but that might not matter if they were to win and take a hands-off, diligence-only, approach to the airport.

Of the other contenders, Vinci has the international ‘clout’ but knows nothing of Australia and it is committed heavily elsewhere.

IFM is already well represented in Australia and must be a front runner. QIC could become preoccupied with its strange investment at Brussels, very distant from Australia, and UniSuper’s focus seems to be on Sydney, where a second airport is being built.

Steady passenger growth but falling in 2019, in line with other airports

Hobart Airport has enjoyed steady passenger traffic growth in the past eight years but growth has reduced quite dramatically in 1H2019, broadly in line with bigger airports across the country. 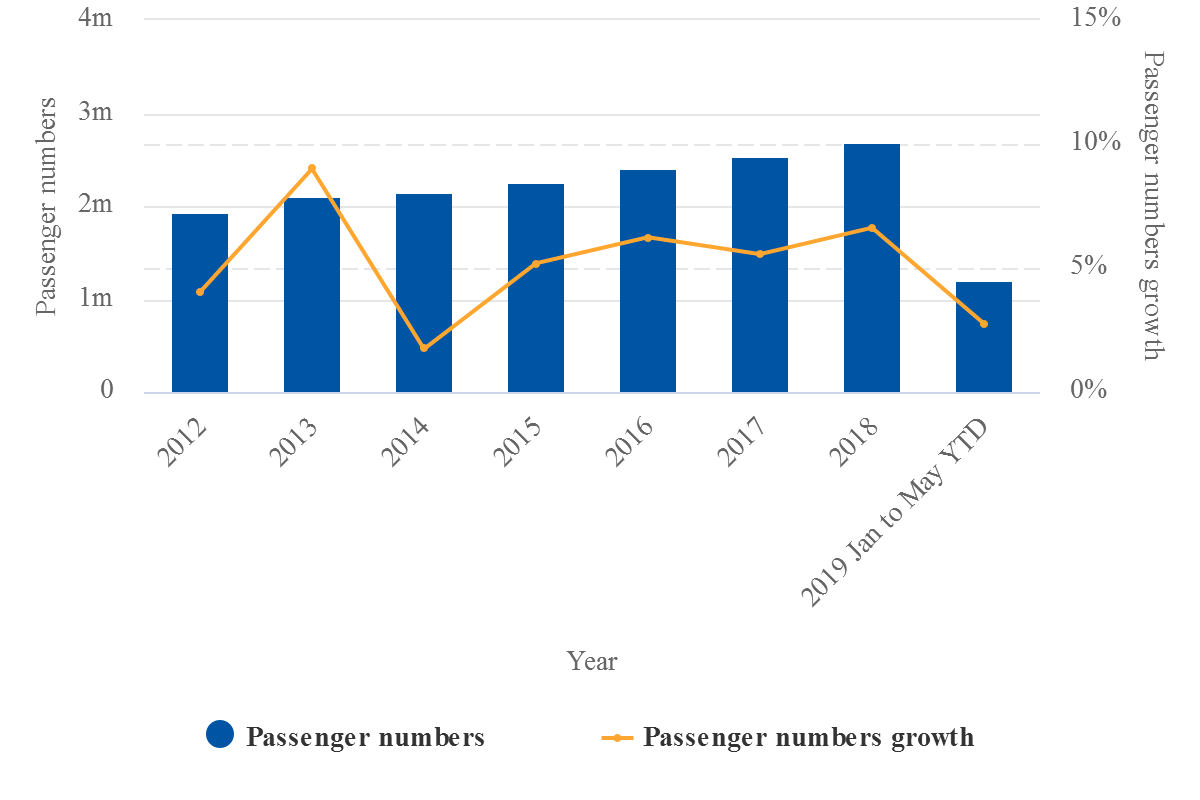 Two issues which impact on the transaction are that while this deal only concerns the equity held by Macquarie, an Australian company, a larger segment of the airport may come up for sale, with the other shareholder Tasplan mulling a sell-down of some of its shareholding.

This organisation, yet another super fund, will decide later on whether to sell.

Moreover, the airport is subject to a 49% cap on foreign ownership, which may make it difficult for larger offshore buyers, unless they are prepared to take a minority interest alongside a local partner.