Hawaiian and JAL navigate a new landscape with ANA’s A380s

Perhaps as a result of capacity pressure on its routes to the US mainland, Hawaiian is working to finesse its international network with the resumption of service to Fukuoka, Japan. It also recently gained increased access to Tokyo Haneda, beginning in 2020, though without as many route rights as it had originally requested.

Despite all those moving parts, Hawaiian and its proposed JV partner Japan Airlines are working to create a competitive position between Hawaii and Japan as All Nippon Airways significantly ramps up its capacity to Honolulu.

Hawaiian takes another stab at Fukuoka, this time armed with a JAL partnership

Japan has been key for Hawaiian’s international expansion, which has occurred during the past decade and is a logical strategy, given that Hawaii is a huge tourist market for Japanese travellers.

Hawaiian Airlines percentage of international departing frequencies by country, as of early Jul-2019 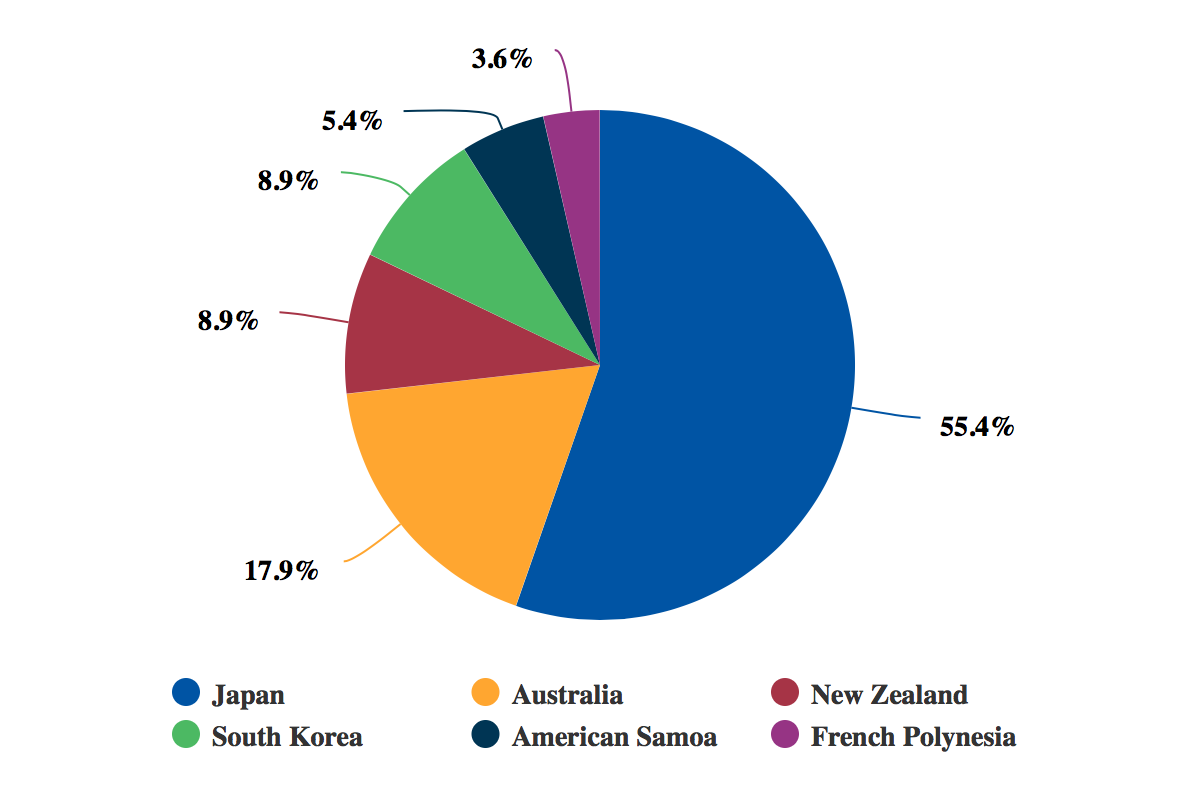 The airline ended those flights from Honolulu after it determined that the route was ramping up more slowly than expected because of the depreciation of the yen, which affected point of sale demand in Japan. At that time, Hawaiian also faced competition from Delta on the pairing.

In early 2019 Delta announced that it was ending services between Honolulu and Fukuoka in May-2019. Shortly after Delta stated that it would cut that service, Hawaiian announced plans to resume its flights, pending requisite approvals.

In its latest iteration of service to Fukuoka, Hawaiian can presumably leverage its partnership with Japan Airlines (JAL). The two airlines have been codesharing for more than a year and are awaiting regulatory approval for their proposed trans Pacific joint venture.

Fukuoka Airport system percentage of departing frequencies by airline, as of early Jul-2018 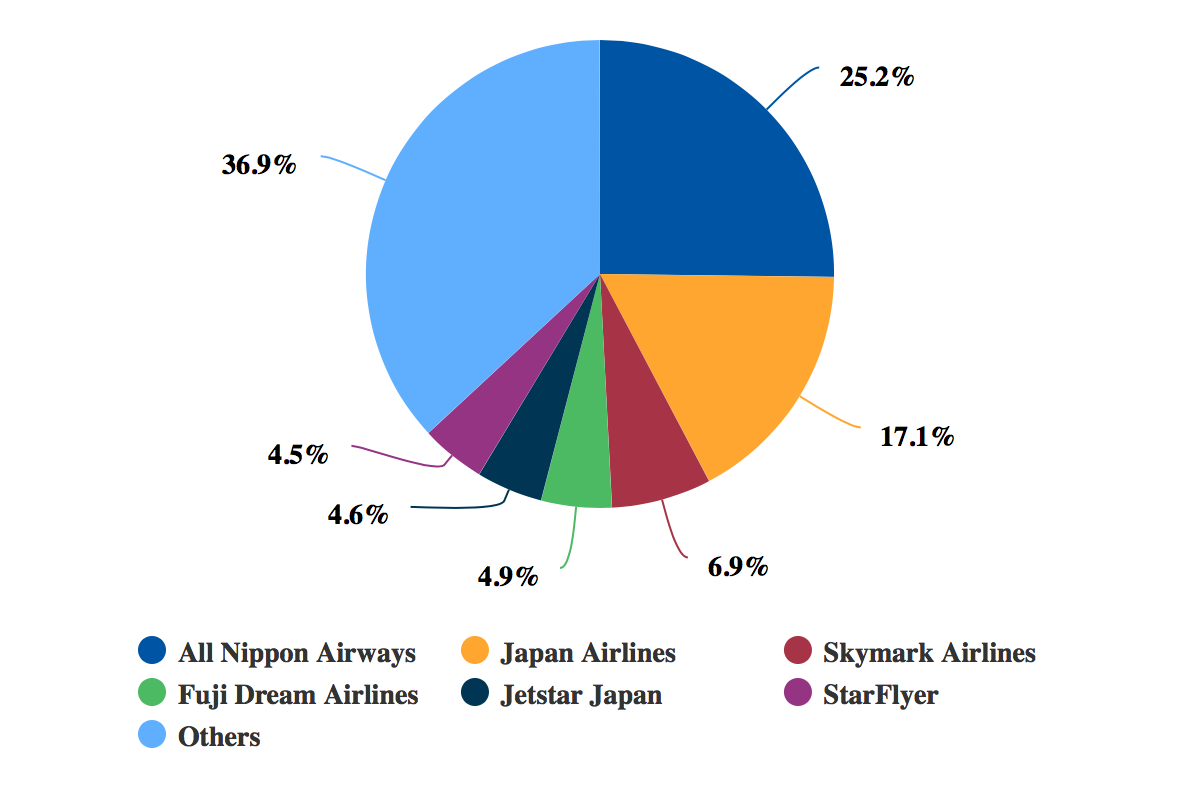 Hawaiian and JAL announced their plan to form a JV more than a year ago, after Hawaiian opted to end its relationship with All Nippon Airways (ANA).

Since that time, ANA has started operating Airbus A380s between Honolulu and Tokyo Narita, those services joining the Boeing 787-9s the airline uses for flights between Tokyo Haneda and Honolulu. The airline operates 10 weekly frequencies on the pairing with its A380 jets, joining ANA's now average of eight weekly frequencies.

Data from CAPA and OAG show that ANA’s seats between Tokyo Narita and Honolulu have skyrocketed 79% year-on-year, which is a substantial capacity increase between Honolulu and the Tokyo region.

As regulators work through their review of Hawaiian and JAL’s JV application, and all operators digest the capacity increase between Honolulu and Tokyo, earlier in 2019 Hawaiian applied for three of 12 additional daytime slots made available for US airlines and was eventually tentatively awarded one slot.

Previously, Hawaiian executives have outlined the company’s rationale in seeking three of the slots.

The airline had acknowledged that a significant amount of domestic traffic in Japan flows into Haneda, which is closer to Tokyo’s city centre that Narita. In its formal application for the slots, Hawaiian stated that through the partnership with JAL the proposed new flights would allow for connections to Hawaii from 27 additional domestic airports in Japan.

Given that existing coverage from Honolulu to Tokyo, it was a safe bet that Hawaiian would not receive all the slots it had requested. But presumably the additional slot does give Hawaiian and JAL some room to offer a bit more network breadth for connections from smaller destinations in Japan to Hawaii.

Hawaiian has protested the allocation of the new slots for Haneda, but it remains to be seen whether the US DoT will change its tentative slot awards.

ANA will continue its work to chip away at JAL’s position in the Hawaiian market through its bet that it can profitably operate a 520-seat aircraft in one of the largest leisure markets from Japan. As of early Jul-2010, JAL’s seat share between Honolulu and Japan was approximately 27%, compared with ANA’ s 22% share. But ANA’s total seats jumped 53% year-on-year.

For the time being, consumers will be the big beneficiaries of the added capacity between Honolulu and Japan as fares have no doubt dropped as a result of ANA’s push into the market.

At the same time, JAL and Hawaiian will continue their efforts to find new opportunities to bolster their strength in the overall Hawaii-Japan market in a manner similar to the service to Fukuoka, where they can jointly market service to Hawaii without competition.

However, opportunities from Japan to Hawaii without competition are few and far between.

Hawaiian and JAL try to fortify against major competition from ANA

Hawaiian is working to beat back competitive pressure in domestic markets with Southwest’s launch of service to Hawaii earlier this year. It is also aiming to craft a strategy, through its JV with JAL, to compete more effectively in its key market to Japan now that ANA has added a significant amount of capacity between Honolulu and Tokyo.

As dynamics from Hawaii to Japan shift, Hawaiian is lauding its decision to partner with JAL, noting in early Apr-2019 that codeshare traffic exchange between the two airlines for the past 12 months was 2.5x higher in the region than for the comparable period with its previous partner, ANA.

Those are promising results, and combined Hawaiian and JAL are in a better position to combat ANA’s capacity growth, but despite that positioning, ANA has raised the stakes between Honolulu and Tokyo.