Hawaiian Airlines, GOL and TAM down; WestJet up

North and South American carriers’ stocks were down with the wider market following the half-day of trading on Wall Street on Friday (27-Nov-2009). The Dow was down 1.5% at the end of trading, pulling the AMEX Airline Index down 1.0%. The negatives from Dubai were softened by a 2.5% drop in oil prices, to USD76.05, after dropping to a seven week low (-7.1%) earlier in trading.

After being closed on Thursday for Thanksgiving, the market was down on Friday on news Dubai's investment arm, Dubai World, may default on USD60 billion in debt. According to Economic Outlook Group Chief Global Economist, the action "should be viewed as a momentary setback in the on-going recovery of global capital markets". A number of analysts have concluded the potential default may not be as disastrous for the economy as the Lehman Bros’ collapse in Sep-2008, easing the drop in wider market slightly before the end of trading.

Investors were meanwhile impressed with positive holiday retail sales during the Thanksgiving break, a sign of improved consumer confidence. Numbers were up although individual spend was down.

TAM (-2.3%) announced on Sunday that a recent Study from Standard & Poor’s shows that it is among the top 10 Brazilian companies with the best practices of information transparency and disclosure. The average score amongst companies in the Bovespa Index is 66.1%. For S&P, this average T&D score is absolutely satisfactory, especially when compared to those in other researched emerging markets.

Analyst warns US carriers not free from potential bankruptcy just yet

In an interview with the Associated Press over the weekend, Analyst, Will Randow forecast US airline RASM to be up 5% year-on-year entering 2010, compared to a 5% to 10% drop in 4Q2009. However, carriers are not out of the woods just yet, according to the analyst, with the economy still weak, especially considering unemployment and oil prices still reasonably high. 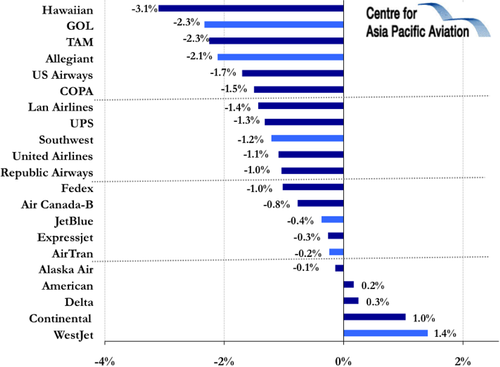