When the Gulf carriers first began to move into the ultra long-haul market, they chose Australia, a place that has been steadily eliminated from the networks of almost all European carriers. The Gulf was an ideal geographic transit location and they built a broad connecting pattern linking a record number of cities in Europe to an equally impressive number of Australian cities with but a single connection.

Capacity from the Gulf hubs to Australia is still short of capacity via Asia, but catching up. The United States is also featuring more prominently in expansion plans. India is a major focus for the Gulf carriers but Turkish is focusing on Central Asia.

Although the next few years will see airlines take delivery of A350s and more B787s and open direct routes, there is still plenty of traffic left for Gulf carrier and Turkish Airlines to carve out.

Hub traffic started to Australia, but now expanding to US

Singapore remains the unchallenged winner in terms of seats to Australia, but the Australia-Gulf (Abu Dhabi, Doha and Dubai) current weekly totals are rapidly approaching the seats to Hong Kong and have surpassed Bangkok, although this is somewhat distorted as there is traffic between Australia and Asia that does not connect onwards to Europe. Indications are that the Gulf carriers have yet more expansion in mind, further altering the traditional travel patterns from Europe to Australia. 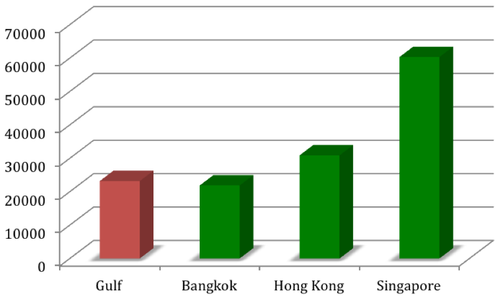 But the population of Australia and New Zealand places limits on the number of seats that can be utilised. Consequently, the latest assault on a market is to North America, a region under-served by Middle East carriers. The sector distances between the Gulf and some US destinations are even longer than those to Australia and at 8323 miles, the Los Angeles-Dubai flight is only 400 miles short of Singapore’s non-stop flight from that city – but Emirates operates it twice daily; such is its capability to leverage transfer traffic.

There is no doubt that North America has been targeted as the next “big thing” in terms of expansion. It has happened quickly and is gathering speed. In 2001, Emirates already had flights (via Singapore) to both Sydney and Melbourne. However, there were no flights to the US or Canada and passengers to India, South Asia and the Middle East flew long-standing patterns that transited Europe or Asia.

But the past decade has altered that picture considerably. While the major gateway transit points of London, Paris and Frankfurt currently remain secure against the newcomers, some long-established, smaller hubs are set to feel an impact on their connecting networks. 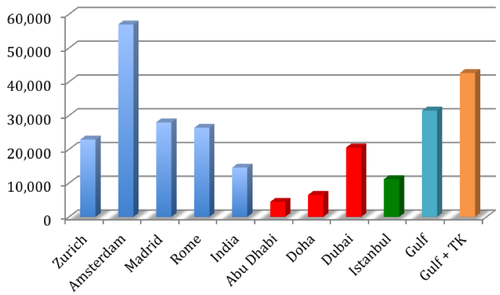 The combined offer of the Gulf airlines has already surpassed the offers via Zurich, Madrid and Rome. Combined with Turkish Airlines, the group is looking like a significant challenge to Amsterdam. While it is true that neither Madrid nor Rome bills itself as a major connecting point for traffic to the East, both Switzerland and Holland are nations with small populations that have built large carriers and networks on fifth freedom traffic.

Additionally, with the operation of double-daily flights from New York and Los Angeles, Emirates offers a choice bonus that European and Asian carriers rarely present. All non-stop seats from the US to India, focussed only on Delhi and Mumbai, pale in comparison to the seats available though the Gulf and then onwards to a host of Indian points with only a single stop.

It is far from over. Emirates has announced that it will begin service to Seattle and Dallas. The new seat count will be constrained as one of the current double daily services to Houston will be re-deployed to Dallas; the net increase will only come from the Seattle flight. But Emirates has received only a handful of its A380s and more of those will find their way to North America. Substituting the A380 for a B777-200LR adds almost 200 seats per flight and 100 to routes now flown with a B777-300ER. Doubtless still on tap are cities like Boston, Washington, Atlanta and Emirates' current major network omission, Chicago.

Emirates may lead, but others will still expand

There is little question that the regional powerhouse is, and will continue to be, Emirates. But both Qatar and Etihad have multiple opportunities still available and Turkish Airlines, with a similar hub philosophy, has made no secret of its intention to perhaps double the number of current destinations in North America. While much smaller than Emirates, Turkish is focussing its growth in a different way. The build-up of destinations in Central Asia, places like Baku and Ashgabat (twice daily from Istanbul), has eclipsed the minimal service currently provided by European carriers.

Turkish also has more flights to more cities in Iran than any other airline, firmly establishing itself in a market that will certainly bring long-term benefits. Its recently announced Africa strategy will increase frequencies and provide widebody comfort on its new B737-800s to a host of African cities.

The differences between Emirates and Turkish are more evident when looking at their seat allocation by region. Due to far greater and larger aircraft, Emirates has many more seats available. But the focus from Dubai is much more concentrated on Western Europe, India and the Middle East while Turkish is most tightly linked with Eastern Europe as well as Central Asia, which features less prominently with Emirates. 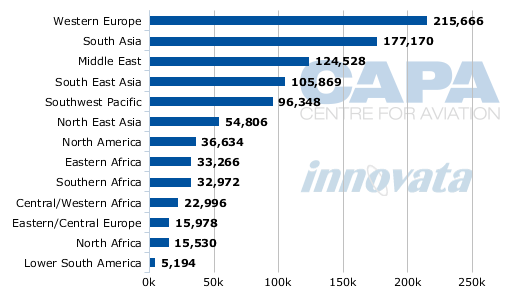 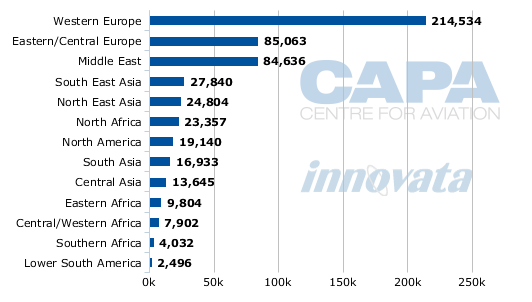 US passenger growth is through the Middle East

The trends are confirmed by the Department of Homeland Security statistics that show the shift in travel of outbound US citizens by region. The numbers are generated on the basis of the first foreign port for non-stop flights, so those headed for India, unless they are flying non-stop, will appear as passengers for the point of connection.

In absolute number terms, the Middle East market represented 1.34 million passengers as opposed to 11.1 million to Europe, keeping that continent well ahead. However, in percentage terms, the number of passengers headed to or through the Middle East is growing and new direct services by US carriers to Africa are re-routing former European connecting traffic as well.

The build-up of routes like Ashgabad-Istanbul by Turkish also make it less likely that established European legacy carriers will be interested in adding such points to their networks. Currently only Lufthansa challenges Turkish with a twice-weekly, one-stop flight. It may be small now, but whatever traffic eventually develops will position Turkish as a market pioneer.

Even with the advent of more efficient aircraft like the B787 and A350, much of the world’s traffic growth will still involve hubs and connections. What the Gulf carriers and Turkish have done is to add significant new routing possibilities that bypass traditional gateways and alter the mix. The trend is only in its infancy from North America and appears to only be stoppable by frequency limits such as those imposed by Canada, a move unlikely to be made by the US.