Rising fuel prices have led to a reduction in Gol’s operating margin and forced the Brazilian low-cost carrier to significantly lower its guidance for the remainder of 2011 as it has not been able to offset higher fuel costs by increasing fares. Gol, however, expects to remain profitable and is still bullish on its long-term position in the fast-growing Brazilian market.

The company’s adjusted net income for 1Q2011 was BRL111 million compared with BRL24 million in 1Q2010. This increase was driven by one-off entries, which totalled BRL79 million, and to a lesser extent improved demand and currency exchange gains.

CFO Leonardo Pereira explained to analysts during Gol’s 1Q2011 conference call that the carrier’s operating margin would have been 14% to 15% if fuel costs remained at the levels Gol initially projected for 1Q2011. Gol’s profitability excluding the impact of fuel has improved significantly as a result of strong demand and a reduction in non-fuel costs. RPKs were up 10% despite only a 6% increase in capacity. Load factor improved 2.2 percentage points to 72.4%, including a 2.6 percentage point improvement in domestic load factor to 73.5%. 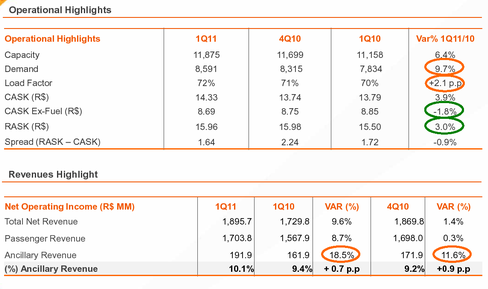 Gol CEO Constantino de Oliveira Junior pointed out that Gol over the past year has improved its domestic load factor more than any other Brazilian carrier. He credits Gol’s decision to be more cautious at adding capacity than all other carriers. Overall capacity in Brazilian domestic market was up 14% in 1Q2011. 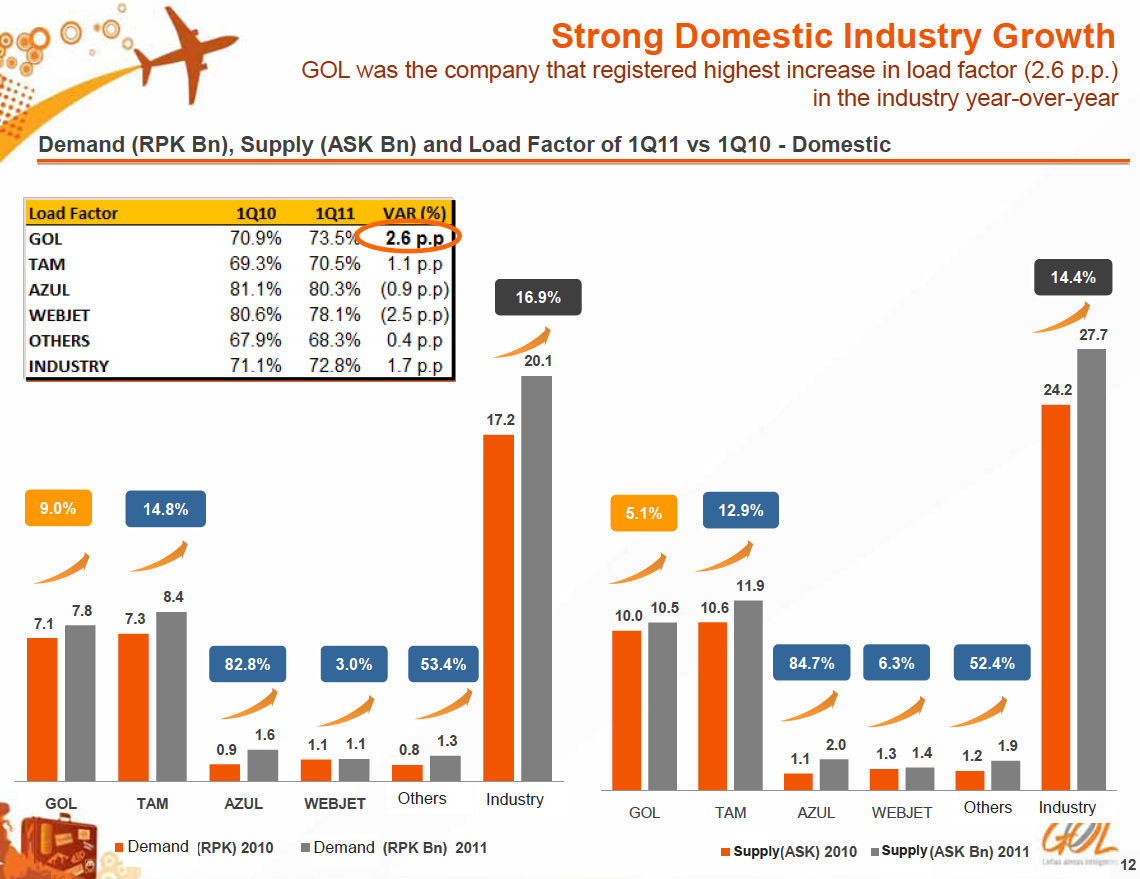 Mr Oliveira and Mr Pereira said Gol will continue to be cautious at adding capacity despite strong demand and instead will remain focussed on profitability. Gol has no plans to adjust its fleet plan in response to the healthy demand environment and will instead look at further improving utilisation of its fleet.

Average aircraft utilisation in 1Q2011 improved from 13 to 13.3 hours per day, helping drive a 2% decrease in non-fuel unit costs. Gol also has unveiled new cost reduction initiatives, including discontinuing 1,100 positions (200 employees) and operational changes which is expected to result in BRL45 million of savings per year.

To further reduce costs, Gol recently decided to again discontinue operating B767s, a fleet it reactivated less than 18 months ago. Gol over the past year has been using four of its six 767s, which remain from its brief experiment operating long-haul scheduled flights following its acquisition of Varig, to operate charter flights while the other two 767s have been sub-leased to other carriers. But Gol has now decided to discontinue the charter programme due to the rise in oil prices. Mr Pereira said Gol has negotiated early returns for two of the six 767s and is now working on negotiating returns for its last four 767s.

The return of the two aircraft will result in Gol saving USD12 million in annual lease costs. Mr Pereira said another USD24 million in annual lease costs will be saved if Gol succeeds at returning the remaining four 767s. He declined to estimate when these aircraft may exit the fleet but says “we are very committed internally and we have very clear objectives in the fleet department to send them back”.

Gol also has decided to drop service to Bogota from June-2011. Mr Oliveira said it is more profitable to redeploy the B737-800 used for the Bogota service on domestic routes because Bogota was marginal and had operating restrictions due to the airport’s high altitude. He said Gol is focussing on routes of three hours or less as these play more to the strengths of its low-cost model.

All the initiatives to reduce costs and improve the efficiency of Gol’s fleet and network, however, are not sufficient to completely offset higher fuel prices. Unlike in most other markets, there have not yet been any increases in fares on domestic Brazilian routes to compensate for the rise in fuel prices since Feb-2011. Mr Oliveira said he expects at some point “sooner or later” there will be a move to increase domestic fares in Brazil but Gol cannot assume this will occur. As a result, Gol has had to adjust its guidance for 2011. 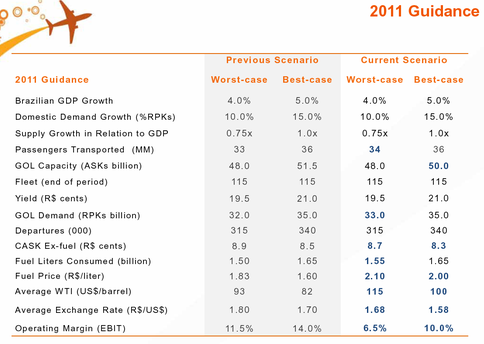 Gol expects fuel costs to be 15% to 25% higher than previously projected. Some of this will be offset by a further reduction in projected non-fuel costs, following the recently implemented new round of cost reduction measures. Gol has not significantly adjusted its traffic or capacity projections for 2011.

Analysts questioned Mr Oliveira and Mr Pereira about the potential affect of high inflation in Brazil and potentially slower domestic growth. Mr Pereira replied that the high inflation, which has prompted the central bank to implement tighter controls, will likely lead to a slowdown in economic activity. But he pointed out the Brazilian economy is still expected to grow 4% to 5% in 2011, albeit down from a rate above 7% at the beginning of this year, and the country’s growing middle class is not about to return to bus travel.

Mr Oliveira remains bullish on the overall Brazilian domestic aviation market, pointing out how the market is now the second fastest growing after China and the fourth largest in the world. The Brazilian middle class, which has already grown by 33% over the past seven years to 101 million people, is expected to grow further. This growth as well as low fares is leading a larger sector of the population to fly for the first time.

Mr Oliveira pointed out how in 2010 for the first time there were more domestic airline passengers in Brazil than interstate bus passengers. The trend of rapid airline growth, partly at the expense of a reduction in bus travel, is expected to continue given the economic growth and the fact fares on many routes are now the same for bus and airline travel.

Bus travel vs airline travel in Brazilian domestic market: 2002 to 2010 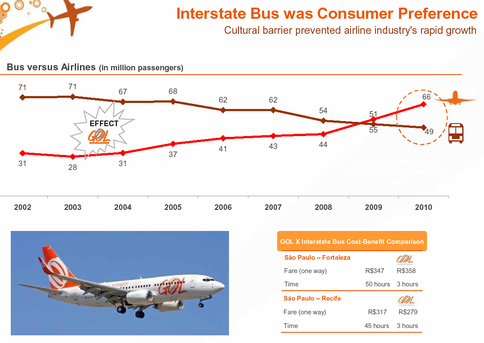