Gol and US Airways up; ExpressJet falls after delay incident

The majority of North and South American carriers’ stocks climbed on Wednesday (12-Aug-09), as the Dow (+1.3%) and NYSE Arca Airline Index (+4%) rose, with investors in buying more ahead of the US Federal Reserve’s reports on interest rates and monetary policy. Oil prices (+1%) were also up, to USD70.16 per barrel.

Gol (+12.7%) led the charge, after 2Q2009 results outperformed analysts’ predictions. The carrier posted a profit of USD191 million for the quarter. According to Leme Investimentos, things seem to be improving for the carrier, after three years of worsening conditions. Competitor, TAM (+4.7%), also rose, ahead of reporting 2Q2009 on 13-Aug-09. Bloomberg analysts expect the carrier to report a net income of USD166 million, its highest since 2003.

Republic Airways (+7.5%) was the biggest North American gainer on the day, ahead of its possible participation in the auction for Frontier. Southwest Airlines (+1.1%) stocks also rose.

Meanwhile Expressjet (-6.7%) was one of the few to be down at the end of trading, after passenger traffic fell 20% year-on-year and the US Government sought an investigation into a seven hour overnight delay of one of its aircraft on 08-Aug-09, leaving passengers stranded onboard.

Air Canada-B (-2.1%) continued to fall, as investors remain unsure on the carrier’s future. 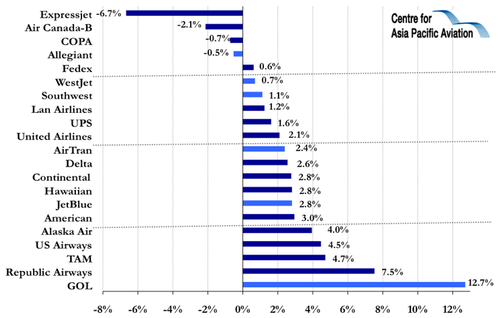