Star Alliance airlines are expanding their capacity by 10.6% in Mar-2011, growing the grouping's share of global supply to 26.1%, as other groupings fail to keep up. The world's unaligned full service airlines (FSA) are still the biggest group (and rich pickings for the expanding alliances). The unaligned FSAs command a 27.9% of global capacity, down slightly from 28.2% in Mar-2010, as they grow capacity by 7.3% year-on-year this month - slightly below the global average 8.6% expansion.

The world's LCCs have overtaken SkyTeam to become the third biggest grouping with a 16.1% stake of global aviation, thanks to a 12% capacity expansion in Mar-2011, against SkyTeam's 10.1% expansion. SkyTeam airlines now hold a combined 15.8% share of global capacity, marginally lower year-on-year, while oneworld's share has fallen from 15% in Mar-2010 to 14.2% in Mar-2011 as the group's capacity has grown just 2.9%. 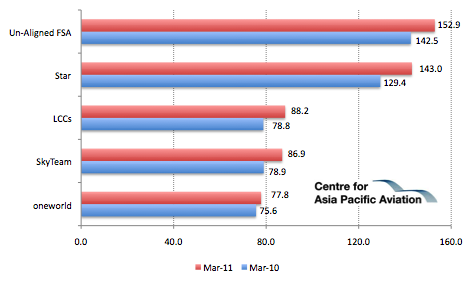 Analysis: Lack of legacy options continues to draw in LCCs

As the candidates for alliance membership continue to shrink in most geographies, the full service legacy carriers continue to forge links with new generation airlines.

The most recent of these is the announcement of a codesharing agreement between American Airlines and WestJet as a means of bolstering the oneworld carrier’s presence in Canada. WestJet already has an interline agreement with Delta and its SkyTeam partner Air France.

Air Canada’s longstanding ties with Star have made it difficult for other alliances to find representation in Canada and the AA/WS agreement includes a frequent flyer provision that takes the pact to a new level and, if the AA miles are redeemable on other oneworld airlines, makes WestJet a defacto participant in the alliance rewards program.

Just exactly how the rewards will be extended to WestJet’s Frequent Guest program is unclear, but the press release indicated that the “airlines are exploring other ways to augment their cooperation in the future.”

Not the first for AA

American already has links with the US carrier JetBlue, as does Lufthansa. Delta, in addition to WestJet, has forged an agreement with Brazil’s GOL as a means of distributing and collecting traffic for its network in South America where SkyTeam is poorly represented.

Given the reality that very few legacy carriers remain either unattached or unpledged to one of the global alliances, there is an increasing need for the network carriers to align with alternative operators in regions where other options no longer exist.

Just how far this integration can proceed without altering the basic business model of the new generation airlines is yet to be seen. There is also the lack of a premium cabin on most of these carriers, presenting a barrier to “seamlessness” for passengers in Business and First Class.

Nonetheless, absent other alternatives, we can expect that these hybrid arrangements will continue to spread.