Shares in Spanish construction giant and BAA owner, Ferrovial, surged 8.5% yesterday on media reports plans for a third runway at Heathrow Airport could be approved shortly, while a new GBP4.5 billion rail hub at the airport is also in the works. Ferrovial also got a lift from reports a subsidiary gained a new road contract in Poland.

In Asia, Airports of Thailand shares gained 7.7% on reports The government has appointed retired transport permanent secretary, Srisook Chand rangsu, to head up the newly established Air Transport Rehabilitation and Development Committee. According to a report in The Nation newspaper, the Transport Ministry stated Srisook would also handle the preparations for the USD2.2 billion Phase 2 expansion of Suvarnabhumi Airport.

The new Committee is tasked with ensuring Thailand's position as a regional hub, a standing that faces massive challenges, not only from Thailand's ongoing political uncertainty, but Thai Airways' fragile financial position and recessions in most of Thailand's major inbound markets. Thai Airways has reportedly been granted a temporary delay in payments for six A330s from Airbus. The airline cited an acute liquidity crunch in its postponement request. 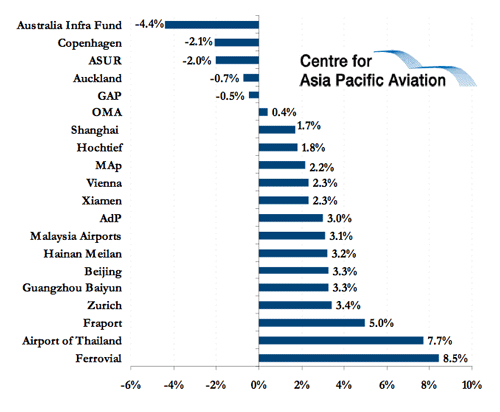