The US economic recession is set to continue throughout the Summer, which will maintain the pressure on US carrier yields and earnings. The Conference Board’s latest Leading Economic Index for the US showed further falls in March, leading its Chief Economist, Ken Goldstein, to conclude the recession “may continue through the Summer, but the intensity will ease”.

He added, “there have been some intermittent signs of improvement in the economy in April, but the Leading Economic Index and most of its components are still pointing down.”

The Conference Board Leading Economic Index: Jan-2007 to Mar-2009 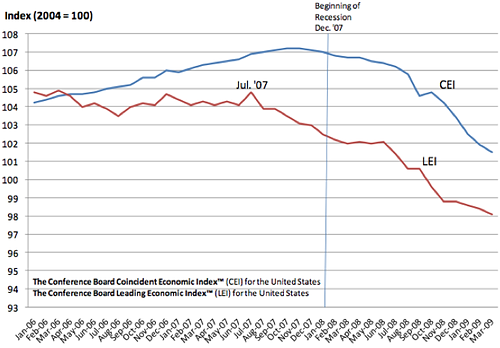 The economic woes are hampering efforts by airlines to gain pricing traction.

Domestic US yields slumped 14% in March, according to the Air Transport Association – a reduction not seen since September-11. 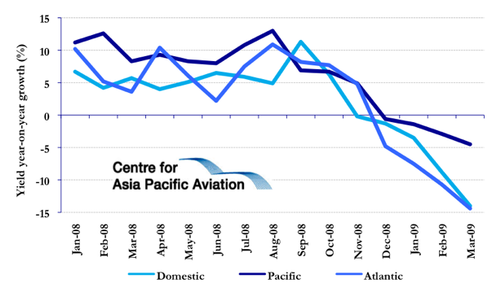 India and China fares/charges on the move

Airlines in other highly competitive and loss-ridden domestic markets, including moving to protect their investment. India and China, are aiming to raise their fares and/or surcharges. For the Chinese airlines at least, the government is behind the moves to raise base fares and limit discounting. As major shareholder in the largest Chinese carriers, it is unsurprising Beijing is moving to protect their investment.