North and South American carriers’ stocks continued to suffer on the final day of trading for 2009 (31-Dec-2009), following the failed terrorist attack on a Northwest service from Detroit via Amsterdam earlier in the week. As a result, the AMEX Airline Index fell 0.32%, not helped by a decline in the wider marker, with the Dow closing 1.1% lower at the end of trading.

The Federal Aviation Administration stated after trading on Friday that it is increasing safety oversight of American Airlines (-0.5%) and will conduct a review of three incidents that occurred during Dec-2009. The FAA and American will work together if corrective action is required.

Air Canada meanwhile fell 2.2%, despite a 0.2% rise in the Canadian TSX. Freight carrier, FedEx, was meanwhile down 2.0%

Hodges Capital Management forecasts US airline stocks could appreciate approximately 50% in the next 12 months from their current levels as carriers see improved demand from Business passengers as the economy recovers. Hodges Capital has investments in Delta Air Lines (shares +0.1% last Friday), Continental Airlines (-0.2%) and Southwest Airlines (+0.4%). 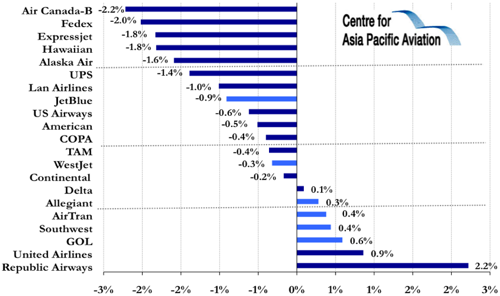