A seven-year low in US stocks led to another day of declines for North and South American carriers on Monday (07-Jun-2010), despite IATA releasing an improved forecast of their performance for 2010. The Dow (-1.2%) fell on continued concerns that Europe’s debt issues could derail economic recovery.

ExpressJet (-4.4%) was down the most on Monday. The carrier announced details of the first step of its multi-phase "Operation: Green Light". The key elements of the plan's initial phase, expected to provide up to USD40 million in run-rate cost savings, include:

The plan was developed in coordination with ExpressJet's advisers, including Goldman Sachs & Co and Seabury Securities LLC, with the carrier commencing implementation of the plan during 2Q2010.  As ExpressJet completes the implementation of the plan's initial step, it will begin detailing the next phase of cost savings opportunities, which will include a competitive review of all salaries and benefits.  The next phase of the plan will be designed to provide ExpressJet with a competitive cost structure and a stronger balance sheet to support growth and new, profitable opportunities.

North American carriers are expected to return a profit of USD1.9 billion for 2010.  This is a major reversal from the previously forecast USD1.8 billion loss, and the USD2.7 billion that the region’s carriers lost in 2009. The US economy is growing with a 3.3% GDP expansion. Carriers are improving efficiencies as a result of demand growth, capacity cuts and domestic mergers.

In Latin America, IATA forecast carriers will show a profit of USD900 million for the year, up slightly from the USD800 million previously forecast. Having posted a USD500 million profit in 2009, Latin America will be the only region to post two consecutive years of profit. The region’s commodities are closely linked with Asian growth and supported by a 3.9% GDP expansion this year. 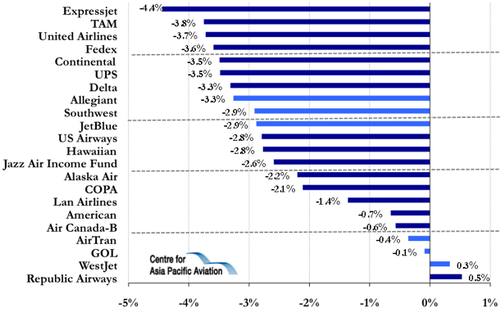