Air Berlin shares remained neutral yesterday, on the same day the carrier reported a 6.4% year-on-year increase in passenger numbers to 3.7 million for Jul-2010. Load factors average 81.2%, a 2.1 ppt load factor reduction. The carrier, however, did not provide unit revenue data, as it had done in previous months.

Fraport CEO, Matthias Zierschang, stated Air Berlin should refocus its operations on Frankfurt to provide improved connections with its new oneworld alliance partners. oneworld airlines, including American Airlines, Qantas, Cathay Pacific, Japan Airlines and LAN Airlines, all have services to Frankfurt but not to Air Berlin's base in Berlin. Mr Zierschang said: “There are strong potential benefits from a oneworld hub in Frankfurt, not only for the airlines but also for us. They can’t create a hub in Berlin."

Air Berlin welcomed Fraport's comments, adding that it has previously found gaining access to Lufthansa's Frankfurt hub to be challenging. Spokesman, Hans-Christoph Noack, said: “There’s no doubt that our membership in oneworld and the completion of the fourth runway in Frankfurt next year open new perspectives. And if Fraport offers the scenario of a oneworld hub, that’s a positive signal.”

Among the non-listed LCCs, flybe reached agreement with Finnair to provide regional services in the Scandinavian and Baltic regions. From 31-Oct-2010, flybe will base three aircraft at Helsinki and launch service to Tampere, Turku and Tallinn. flybe added that the two airlines have also agreed to commence discussions on a potential wider cooperation, which could see flybe providing a range of services across Nordic and Baltic markets. 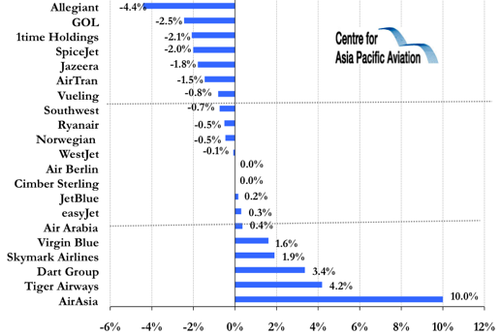