European airports had a reasonably positive year in 2010, generating a 4.2% increase in passenger throughput, despite bouts of extreme weather, labour unrest, passenger taxation in some markets and lingering economic problems in many parts of the continent. Freight traffic recovered by 18.7% last year (off depressed levels in 2009), while aircraft movements were flat (dropping 0.2%).

ACI-EUROPE said it remains “cautious” regarding the outlook for 2011, noting the sustainability of air traffic growth in Europe is likely to be affected by several external factors, “including the ability of the EU to tackle the continent’s debt crisis, inflationary pressures and in particular further surges in oil prices as well as additional aviation taxes in Germany and Austria.”

"Not the kind of bounce back you would expect" - ACI EUROPE

2010 saw a “gradual yet incomplete air traffic recovery”, according to the association’s Director General, Olivier Jankovec, who added it was “not the kind of bounce back you would expect following the worst economic and financial crisis.”

He added that while the volcanic ash crisis early in the year took a heavy toll, the pace of air traffic growth was also held down by a “jobless economic recovery throughout most of Europe, mounting sovereign debt crises and sweeping harsh austerity measures.”

Passenger traffic in 2010 was still 1.2% below 2008, though freight traffic is now 2.2% over 2008 levels, thanks to last year’s bounce-back. ACI EUROPE observed, “significantly, there was no reversal of network contraction, as airlines have yet to fully restore frequencies and destinations cut during the crisis.”

Russian and Turkish airports were among the fastest growing (growth was led last year by Antalya and Moscow Domodedevo with close to 20% increases), while several airports in the mature market of Italy also did well, namely Milan Malpensa and Rome Fiumicino.

London-area airports suffered, while there was slow growth at the Paris CDG, Frankfurt, Madrid and Amsterdam hubs. Barcelona, Copenhagen, Vienna and Stockholm reported moderate growth among the airports handling over 10 million passenger p/a. 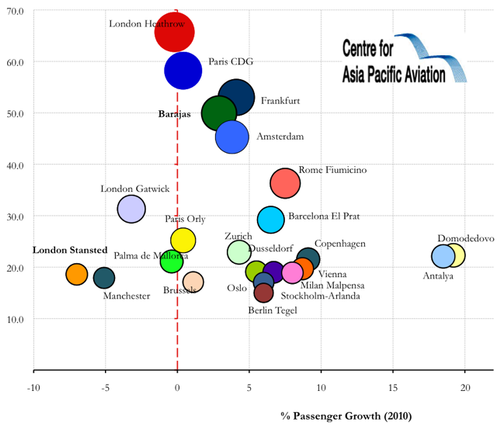 Focusing on Italy, Rome Fiumicino reported an encouraging 7.5% increase in passenger numbers to 36.3 million last year, while Milan Malpensa reported an 8% increase to just under 19 million.

Alitalia handled over 16 million passengers at Rome Fiumicino last year, a 5.8% increase, including an 18% surge in intercontinental traffic. 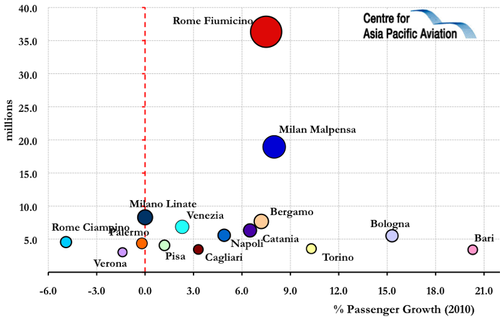 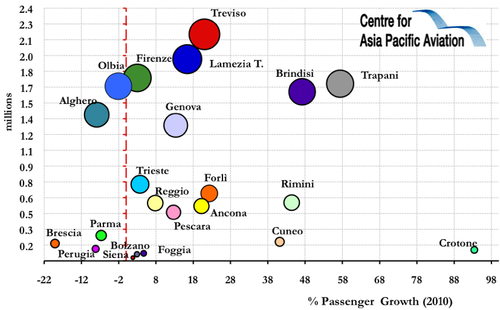