The Association of European Airlines (AEA) reports that members endured their tenth consecutive month of traffic reduction in Aug-2009, with the AEA expecting September results to be even worse. 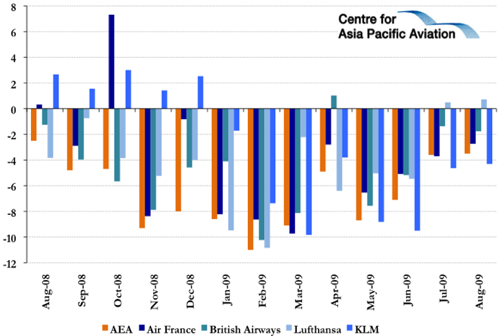 AEA Director General, Ulrich Schulte-Strathaus added that the revenue picture is “even more gloomy”, with the average price per km during the peak mid-Summer period down more than 17% year-on-year”. He added that AEA airlines’ total passenger revenues are “between EUR1.5 billion and EUR2 billion lower per month than the levels planned and budgeted for”. Mr Schulte-Strathaus stated the carriers’ cash reserves have been “depleted through a profitless Summer, and we are facing a very bleak Winter period”.

During the month, Lufthansa Group’s traffic data was affected by the consolidation of both British Midland (bmi) and, for the first time, of Austrian Airlines (AUA), meaning Group capacity rose by 14.5% in the month, matched by a similar increase in traffic (RPKs) (+14.6%).

The consolidation effects were particularly evident in the Europe traffic region, where capacity (+34.5%) and traffic (+36.8%) both picked up sharply, and load factors improved to 73.6% (+1.3 ppts).

Without the effects of consolidation, Lufthansa traffic was down by 3.1%. As capacity management reduced capacity by 4.0%, however, the load factor was up 0.7 ppts to 80.9%.

“No sign of a fundamental improvement” in cargo market: Lufthansa

The cargo market is also suffering. According to Lufthansa, “there is still no sign of a fundamental improvement in market conditions". Revenue Cargo tonne-kilometers fell by 8.3% in Sep-2009. However, as the carrier significantly scaled back capacity the month (-12.2%), the cargo load factor picked up to 66.4% (+2.8 ppts).

In reaction to the current conditions, Lufthansa reportedly plans to cut administrative costs by 15% by the end of 2011. However, the carrier has stressed that, despite recent acquisition activity, it remains sufficiently financed and "does not need to approach the capital markets in the short term for reasons of liquidity”.

Meanwhile, Air France-KLM noted that market conditions are "similar to those prevailing before the Summer and unit revenues remain under pressure”.

On the European network, both capacity and traffic were down by 5.6% year-on-year, for a stable load factor at 72.5%.

Air France-KLM’s cargo business (including Martinair) saw its load factor improve by 2.2 ppts to 66.1% on the back of declines in capacity and traffic of 20.0% and 17.2%, respectively.

Reacting to the current challenging conditions, Air France-KLM has announced plans to reduce capacity by 1.6% in the upcoming Winter schedule, with a 2.8% reduction on long-haul services and 6.4% reduction in short and medium-haul capacity, compared to Winter 2007 levels.

Air France-KLM has also stated it is seeking a 20-30% increase in freight rates in the upcoming Winter season, matching similar planned increases by Lufthansa Cargo, in an attempt to increase revenues and profitability from freight operations.

Air France-KLM added that capacity would remain at current levels in 2010 and 2011, with traffic not expected to return to 2008 levels before 2012.

Air France-KLM also stated it hopes to reach breakeven point at the start of FY2010 (commencing Apr-2010), excluding the impact of fuel hedging contracts, although the carrier added that it can not predict when the company will return to profitability, adding that fuel hedging could continue to have a negative impact on the carrier in FY2010.

In other developments, Air France-KLM recently stated it plans to offer additional service traditionally provided for premium passengers on an “a la carte” basis to Economy travelers, to boost ancillary revenues amid a decline in ticket revenues. The carrier added that it has not ruled out the possibility of removing Business class from some medium-haul routes.

The Premium Economy (Voyageur) offering will initially be available on services to New York, followed by Tokyo, Singapore, Beirut, Beijing and Hong Kong from 25-Oct-2009, with the product to be extended to the entire long-haul network by the end of 2010.

The carrier added that while the product was originally designed as an upgrade option for Economy passengers, it is now being deployed to attract Business travelers who would have otherwise downgraded to Economy. The carrier has invested EUR75 million installing the seating and expects to generate EUR120 million in extra revenue p/a from the move.

Echoing the comments made by Air France-KLM, British Airways stated that market conditions in Sep-2009 "remained unchanged, with yields under pressure from the year-on-year impact of lower fuel surcharges, exchange movements and mix”. 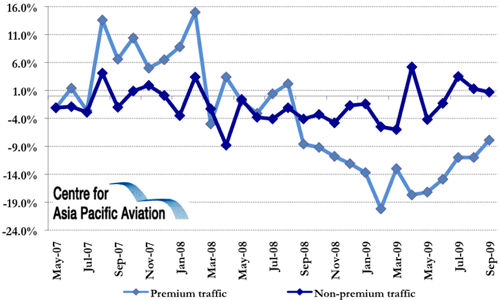