On 3 & 4-Jul-2014, many of Europe's senior national and Commission-level aviation civil servants and regulators joined representatives of airports, ANSPs, airlines and labour organisations at a luxury hotel in Vienna. Billed as a Dialogue between the European Civil Aviation Conference (ECAC) and the European Union (EU), the purpose was to discuss European air transport competitiveness and to seek a way forward in a global environment.

The European aviation industry, its regulators and policy makers acknowledged that the continent is falling behind other major world regions in connectivity and airline profitability and needs to think about how to do better. By the end of the two days, while there were one or two protectionist noises, there was a near consensus view that market forces should be allowed to work. In addition, 'levelling the playing field' with other regions should focus on reducing aviation taxes and easing the processes for infrastructure development.

In this report, we summarise CAPA's analysis of the state of Europe's air transport sector, which was presented at the conference, and the other main themes that emerged from the Dialogue.

Founded in 1955 as an intergovernmental organisation, ECAC's website says that it "seeks to harmonise civil aviation policies and practices amongst its Member States and, at the same time, promote understanding on policy matters between its Member States and other parts of the world."

Since 1995, ECAC/EU Dialogues with the European air transport industry have been bringing together senior-level aviation decision-makers and industry leaders.

The organisers of this year's Dialogue invited CAPA to participate in the opening panel discussion, commencing with a presentation on the state of play of the European air transport sector. Represented by chief financial analyst Jonathan Wober, CAPA's analysis opened with the observation that Europe's place in the air transport world was diminishing as the global centre of gravity continued to move East.

This reflected the rising importance of Asia Pacific and the Middle East, as illustrated by the number of aircraft (in particular widebodies) on order. 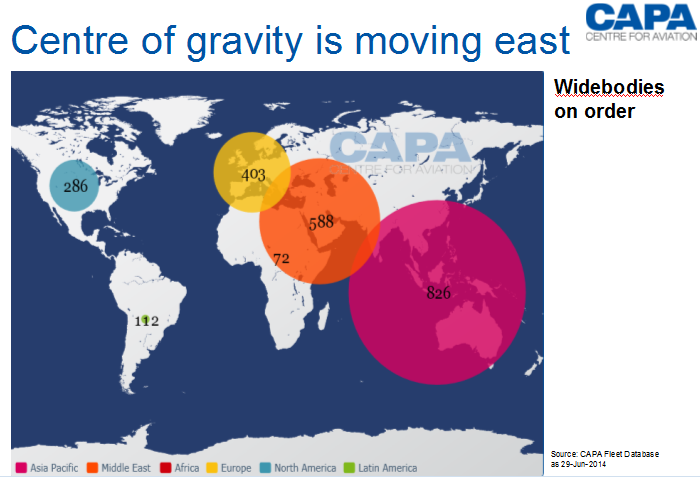 CAPA: Regulation should not prevent disruption, since innovation is good and new models emerge

CAPA's view was that, in a rapidly changing airline world, it was important not to prevent disruption, since disruption leads to innovation and this is to be welcomed. The role of regulation should be to ensure safety/security standards and, to some extent, to provide consumer protection, but nothing else. There was no role for restrictions on ownership and control or market access.

Staying within the sphere of government influence on aviation, he added that more concerted attention should be given to reforming the taxation of aviation and the processes that enable aviation infrastructure development. 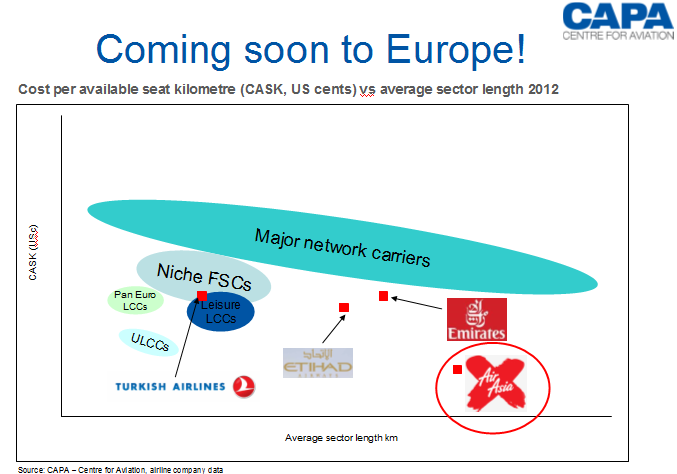 If the forces of change were allowed to act, the resultant innovation could lead to new and more efficient ways of doing this. As an illustration, AirAsia X is a long-haul low-cost airline, one of six in Asia Pacific, which is now assuming many of the functions of full service carriers.

For example, almost 50% of its passengers at Kuala Lumpur is transfer traffic and it uses O&D pricing, GDS and OTAs, but it does everything at a much lower cost than traditional long-haul carriers. This new network carrier business model has emerged as a result of market forces.

The CAPA presentation went on to remind the conference of the two way link between the penetration of air travel and economic wealth. Europe's air travel penetration level was quite high by comparison with its GDP per head, but the region's airline suffered from low profitability with the second lowest net margin of all the world's regions.

See related report: Air travel rises with a country's wealth. Law of nature, or can government policy make a difference? 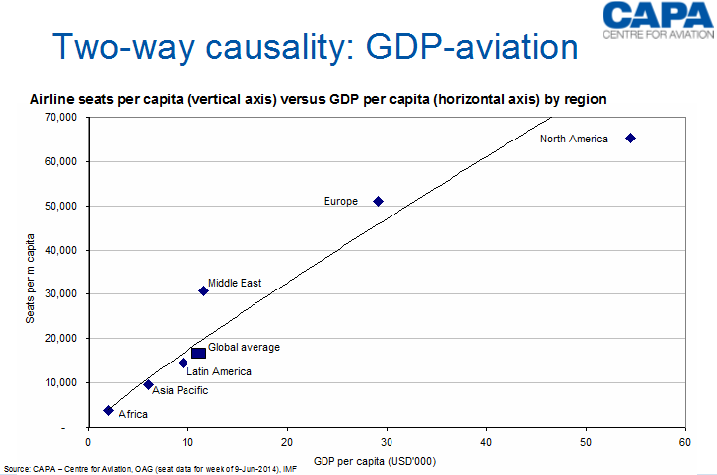 There was evidence to suggest that the fragmentation of the European airline industry played a part in its low margins, by contrast with North America, which was both the most consolidated and the most profitable airline market. Ownership and control restrictions had a part to play in this respect. 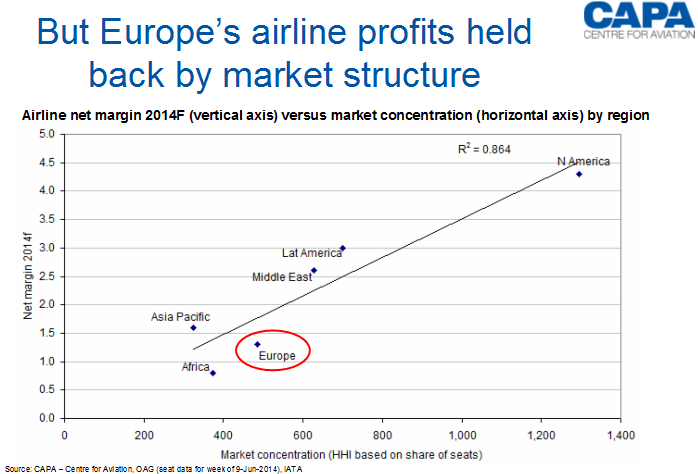 CAPA's presentation concluded by presenting its recipe for the 'Protectionist Pie'. The ingredients for the pie were ownership and control restrictions, government ownership and subsidy of airlines, the fear of flags of convenience, protecting existing sixth freedom hub rights, protecting pilot job security and (the crust sealing in all the other ingredients) calls to restore a level playing field.

The final touch to this recipe, the cherry on top of the pie, was nationalism.

It was important to be able to recognise the Protectionist Pie, but CAPA urged delegates not to indulge in it. 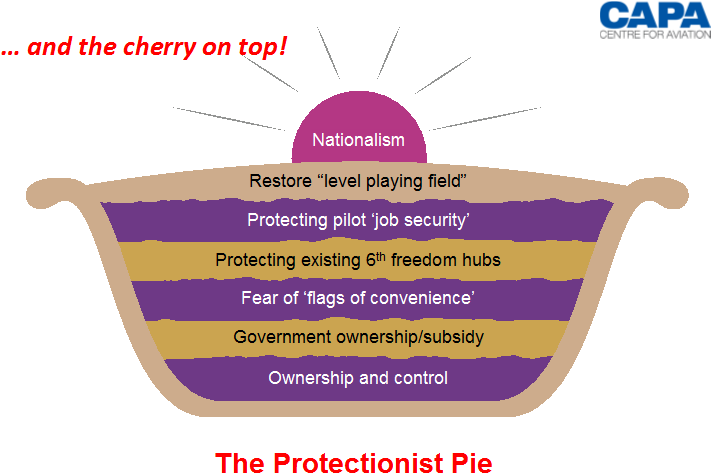 Several of the themes identified in CAPA's analysis of the state of the European air transport sector recurred in other contributions to the conference and a number of further themes also emerged.

A clear vision is needed for aviation - and its value stressed

It took an intervention from the floor at the end of the first day to articulate a theme that had been struggling to come to the surface throughout the day. Jon Horne, vice president of the European Cockpit Association, suggested that Europe's aviation industry needs a clearly articulated vision.

Mr Horne framed this as a choice between having what he termed an "indigenous" aviation industry, with strong European airlines carrying the bulk of the traffic, or one where players from other regions took the lion's share. Although not all delegates defined the question in the same way, it was a recurring theme of the conference that there was a need for Europe to have clear objectives, both from the industry itself and from its regulators.

The European Commission's director aviation and international transport affairs, Matthew Baldwin, agreed that such a vision would be useful and undertook to bring about its commission to writing.

Related to the point about vision, there was also a feeling that the industry should do more to celebrate and promote its value in Europe.

Ownership and control restrictions - everyone says remove them (in principle)

Although he stated that EU policy is to reduce the restrictions, there does not seem to be a clear path towards achieving this at present.

Fair competition, an expression with many shades of meaning

It was evident that the subject of fair competition is important for all, but there are differences in how to define it. In particular, do you define the market as only consisting of Europe market, or should regulators view the industry globally?

In addition, should the focus be on restricting competition from airlines from other regions, or on prompting Europe (both the EU and member states) to be more supportive of the air transport industry?

The processes of approval, investment and development of aviation infrastructure are very cumbersome and need a major rethink. Typically, it takes far too long for projects such as new runways and airport terminals to be approved and built. One issue is that member states, rather than the EU itself, make their own decisions on this - and each has its own procedures.

In addition, by comparison with some other regions of the world where airport construction can happen more quickly, Europe's nations have to observe the democratic process and take account of all points of view in the debate.

The infrastructure issue links to connectivity and the question of whether or not it is important that it is provided by European airlines as opposed to those from other regions.

A recent ACI report highlighted the loss of connectivity market share of EU hubs to non-EU European hubs such as Istanbul and Moscow and to non-European hubs in the Middle East. Europe's connectivity is increasingly reliant on indirect connections. ACI warned of "the increasing risk of Europe being by-passed as an aviation hub" and called on the EU to respond with more liberal aviation policies.

The Single European Sky remains a vital project, although its progress is far too slow and it needs fresh impetus.

Tony Tyler, director general and CEO of IATA, gave his support to the SES2+ package of measures designed to move the project forward, although others expressed the view that more ambition is needed. Eurocontrol director general Frank Brenner posed the question of whether market forces might help in achieving the single sky? (Not through competing service provision, but, for example, through the tendering of services).

A number of other points for Europe's numerous regulators also emerged from the dialogue:

Will anything change? A consensus may be building

As is often the case with such conferences, there were cynics who felt that the event was just a talking shop and that it would add little value beyond providing an opportunity to exchange business cards.

Nevertheless, there was a surprising degree of unanimity about the need for a more liberal regulatory agenda to address Europe's underperformance against other major world regions in terms of connectivity and airline profitability.

This ongoing underperformance provides Europe with a growing incentive to change. The new European Commission (a change of personnel is currently taking place) and the opportunity that this brings in terms of new thinking and energy could provide the catalyst.