The report highlights the loss of connectivity market share of EU hubs to non-EU European hubs such as Istanbul and Moscow and to non-European hubs in the Middle East. ACI warns of "the increasing risk of Europe being by-passed as an aviation hub" and calls on the EU to respond with more liberal aviation policies.

Connectivity is linked to economic wealth

See related report: Air travel rises with a country's wealth. Law of nature, or can government policy make a difference?

Before looking at some of the main findings of the ACI report, it is worth outlining the methodology developed by SEO. In essence, SEO defines the connectivity of an airport as the weighted number of weekly flights available from that airport to non-stop destinations and to one-stop destinations involving flights of the same airline or of two airlines in an alliance or codeshare.

A weighting is calculated for each individual direct and indirect connection. A flight with a daily frequency may have different weightings for each of the seven flights and for each possible connection if different aircraft types are used and if different connections are possible.

In addition to assessing the direct and indirect connectivity of an airport, the ACI report also measures 'hub connectivity'. This employs the same methodology to calculate a weighted number of weekly connections between two other airports via a hub airport.

In all cases, schedule data for the third week of June was used since the Summer season typically has a full range of connectivity, while there are some distortions in the peak holiday season later in the summer. 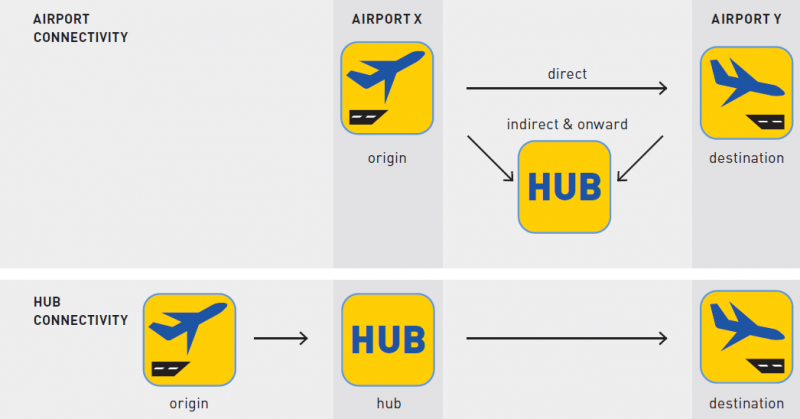 The global financial crisis interrupted the growth in connectivity, which suffered a 4.9% decline in 2009. In absolute terms, the volume of weighted connections lost in 2009 was roughly equivalent to the 2014 volume of connections between Europe and Africa. Direct connectivity fell by 6.1% in 2009, while indirect connectivity fell at the slightly lesser rate of 4.2%, as hub routes were relatively favoured over point to point routes and regions outside Europe were less adversely affected by the crisis.

There have been differences in the development of connectivity between Europe and other regions since the financial crisis. The strongest increase in total connectivity from 2008 to 2014 has been between Europe and the Middle East, up 46%. Direct connections with the Middle East have increased by 59% over this period and indirect connections by 43%. 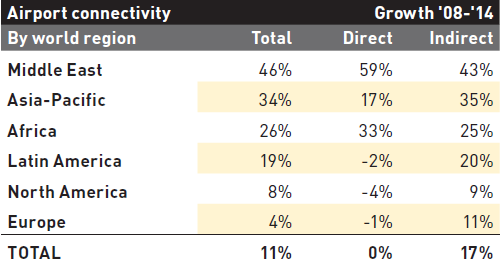 Although Europe has seen the strongest growth in connectivity with the Middle East, the latter accounts for only 4% of its total connectivity, still less than any other region.

The region with the greatest number of weighted connections (apart from Europe itself) is North America, although its share of total connectivity with Europe has fallen from 30% in 2004 to 27% in 2014. Asia Pacific's share has increased from 14% to 19% over the same period.

EU airport connectivity growth has been slower than non-EU Europe

Airports within the European Union have fared less strongly than those from outside the bloc. Non-EU European airports have more than doubled the level of total connectivity since 2004 (+107%, to 2014), while the connectivity of EU airports is up only 27%. As with Europe as a whole, this broadly reflects passenger traffic growth, which increased by 125% in non-EU airports and by 23% in EU airports from 2004 to 2013.

EU airports were more heavily hit by the global financial crisis, with their connectivity dropping by 5.7% in 2009 versus a fall of only 0.5% for non-EU airports. EU airport connectivity fell to all regions apart from the Middle East and Africa in 2009.

After the initial recovery, EU airport connectivity fell again from 2011 to 2013, but has picked up again in 2014. The 2011-2013 dip in EU connectivity was not accompanied by a dip in passenger numbers, highlighting a concentration of traffic and higher load factors on existing routes.

Airport, direct and indirect connectivity for EU and non-EU airports: 2004-2014

From 2004 to 2014, connectivity growth by airport size group has been inversely proportional to airport size. Group IV connectivity is up 46%, Group III 41%, Group II up 35% and Group I up 34%. Growth at the small and regional airports has been driven by direct connections through low-cost airlines and by the network impact of indirect connections with larger airports.

Much of this growth took place before the financial crisis, while Group IV airports had the biggest decrease in total connectivity in 2009 (-6.2%) and had to wait until 2011 before recovering their 2008 level (all the other groups bounced straight back in 2010). Group IV airports are the only size category that has still not recovered its pre-crisis level of direct connectivity. Indirect connectivity is up 15% to 17% from 2008 levels for all groups.

EU hubs provide the majority of onward connectivity to other regions, but other hubs are growing faster

European hubs are responsible for the largest part of indirect connections from Europe to other regions and the majority of these hubs are within the EU. However, over the past 10 years, the growth in onward connectivity of non-EU European hubs (+307%) and of hubs outside Europe (+53%) has outpaced that of EU hubs (+28%). 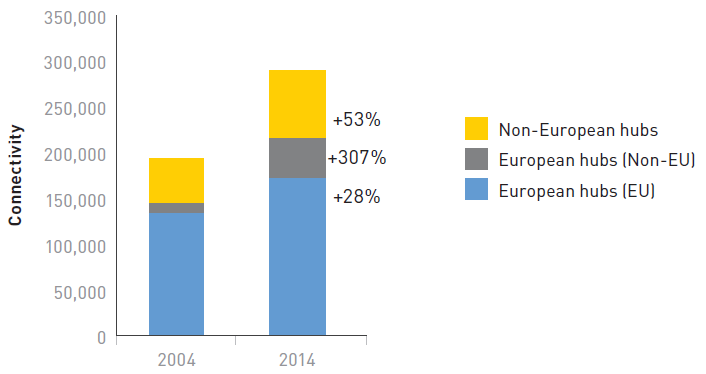 FRA, AMS and CDG are the top three for onward connectivity, but losing share

Non-EU European hubs Istanbul Ataturk and Moscow Sheremetyevo and non-European hub Dubai have forced their way into the top 20 airports for onward connections from Europe, but were not in the list in 2004. 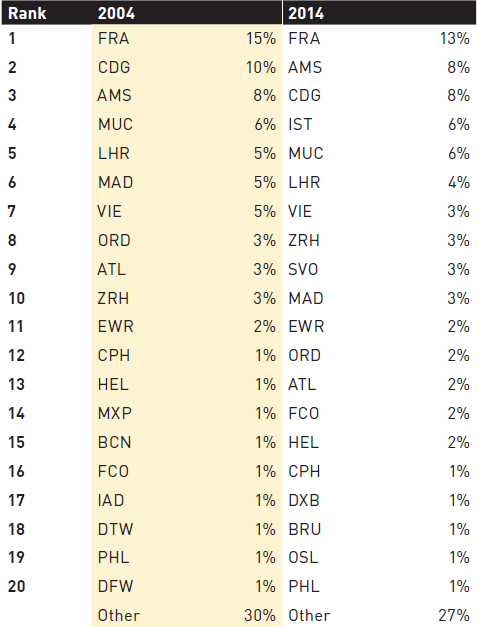 The falling share of EU airports in providing onward connectivity for Europe has not prevented Brussels and Oslo from sneaking into the top 20. Brussels Airlines' growth and admission to the Star Alliance and Jet Airways' hub operation have boosted the onward connections of BRU, while Norwegian Air Shuttle's rapid growth has helped OSL.

EU airports are still in the leading positions for onward connectivity from Europe to each global region, apart from the Middle East, to which Istanbul Ataturk is ranked first. Frankfurt is number one for onward connections to Asia Pacific and North America, Paris CDG to Africa and Madrid to Latin America.

The large Group I airports are responsible for 77% of hub connectivity in Europe and Group II airports account for 20%, leaving only 3% for Group III and Group IV combined. Europe-North America is the largest route region for hub connectivity, accounting for 29%, followed by intra-Europe (27%) and Europe-Asia (18%).

Hub connectivity is growing more rapidly in Turkey, Russia and the Gulf

However, although Europe's hubs are offering more connections to all regions than they did 10 years ago, these growth rates are dwarfed by the fastest growing non-European hubs. 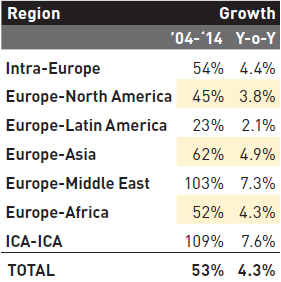 Germany is Europe's number one country for connectivity

By country, Germany has the highest level of airport connectivity, followed by the UK and France. This top three accounts for 44% of total EU connectivity and 35% of total European connectivity.

In hub connectivity, Frankfurt takes first place and London Heathrow slips to fourth place, reflecting the latter's relative weaknesses as a hub in terms of infrastructure and the lower market share of its leading airline (British Airways) relative to the leading airlines at the other three major European hubs. Istanbul Ataturk is now just behind Heathrow in the hub connectivity list. 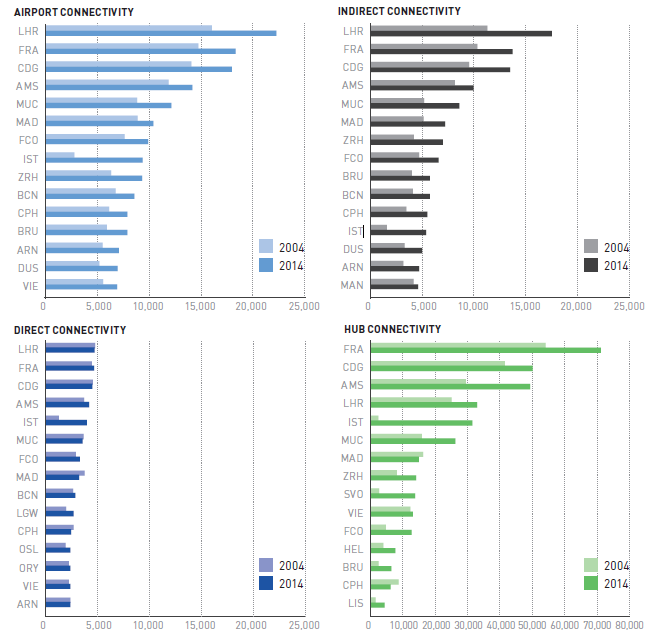 The answers to connectivity shortcomings lie in liberalisation, not protectionism

The report summarises its findings by noting that Europe's airports have experienced an impressive increase in connectivity over the past 10 years, but that there have been some notable changes since the global financial crisis.

ACI uses the report as an opportunity to stress the importance of pubic policy and regulation in facilitating and enhancing connectivity, which is closely linked to the economic wealth of countries.

It contrasts the European Union's approach to aviation with that of "prominent non-EU and other non-European countries" that have "placed airport connectivity at the heart of the policies and strategies underpinning their economic development".

ACI concludes by calling for progress within the EU on issues such as airport capacity, the liberalisation of market access, the lowering of navigation charges and aviation taxes and lighter economic regulation of airports. This echoes sentiments frequently expressed by CAPA.

There will however undoubtedly be those who will seek to use the report as an argument to limit outside competition and restore the good old days. That would neither be helpful nor likely to achieve any of the economic and other goals that ACI is proposing.

Provided that the report's analysis is not hijacked by the voices of protectionism, it looks to be a useful contribution to the liberalisation debate.