The European Commission (EC) has released a report on Member States' application of the European Union (EU) rules on airport charges — the fees airlines pay to airports for the use of runways and terminals — which are sometimes estimated to account for up to 10% of airlines' operating costs. The Directive currently applies to around 75 airports in the European Economic Area, which comprises the 27 member states of the EU together with three of four states that are members of the European Free Trade Association; namely Iceland, Liechtenstein and Norway. (Croatia has applicant status to the EU).

The report shows that since the introduction of the rules in 2011 following a 2009 Directive, larger European airports have become more transparent when taking decisions about these charges. In general, consultations between airports and airlines, as required by the Directive, are now being carried out and Member States' independent supervisory authorities have been set up.

However, problems identified at a number of important airports show that the Directive has not been applied consistently across the EU and further monitoring of the situation is needed. Largely as a result of the development of a true European ‘open skies’ aviation market and the competition that this has brought, EU airports have gone through an important transformation of their businesses, which also has an impact on the setting of airport charges.

Commission vice president Siim Kallas, responsible for transport, commented: "This is about value for money for airlines and of course ultimately passengers. If European airlines are to respond to the challenges they face, and continue to provide intra-EU and global connectivity, it is essential that competitive airport services be available. This is the goal of the airport charges directive, which we must see consistently and thoroughly applied all over Europe."

In order to promote a more consistent application of the Directive and more cooperation among Member States' independent supervisory authorities, the Commission has established the Thessaloniki Forum of Airport Charges Regulators.

The first meeting of this forum, hosted by the Greek Presidency of the Council of the EU, took place in Thessaloniki on 13-Jun-2014, attended by independent airport charges regulators (Independent Supervisory Authorities - ISAs) from EU countries. The ISAs outlined a number of issues encountered with implementing the Directive and presentations were also made by the UK CAA, ACI-Europe. For the airlines, the AEA, ELFAA, ERA, IATA and IACA also outlined their positions. The forum will meet regularly in the future.

The EU explains its rationale for involvement at any level as follows: “Charges for the use of airport infrastructure can represent a significant expense for airlines. In the European single market, there is no justification for airport charges to be applied in a discriminatory manner, to the detriment or advantage of certain carriers. For the European aviation market to work properly it is important that minimum standards on the calculation of airport charges be applied in order to ensure fair competition among all carriers using an airport. Such common standards, however, need to respect the different systems of regulation which are in operation in the Member States.

"For this reason the European Union adopted a Directive in Mar-2009, which had to be implemented in all Member States by Mar-2011 at the latest. The Directive builds on and is complementary to the policies on charges for airports and air navigation services drawn up by the International Civil Aviation Organisation”.

The EC report thus takes stock of the Member States' implementation of this Airport Charges Directive.

The Directive sets out a number of principles on airport charges to be followed by the main airport in each Member State and by all airports handling more than five million passengers per year and provides for the setting up of independent bodies for the monitoring of its application within these terms:

The Commission’s report draws on the results of a study on the application of the Directive, based on surveys among the main stakeholders and analyses of charges applied at a sample of European airports.

Practical examples of some of the headings above might include:

In the response of the airports’ representative body, Airports Council International Europe (ACI Europe), to the report ACI Europe took the opportunity to underline the “generally successful” implementation of the Directive across Europe, but also stressed the need for airport regulation to evolve so as to better reflect market reality.

It argues that while the Directive is essentially based on the assumption that airports are natural monopolists and that their charges need to be scrutinised, the Commission now recognises that the development of new airline business models has resulted in a shift in bargaining power between airports and airlines – to the benefit of the latter.

However, this is no longer limited to regional airports and low-cost carriers at a time when ‘airline hybridisation’ is becoming the rule of the game – with low-cost carriers moving up market and full service carriers adapting to that challenge. The emergence of global hubs, in particular in the Middle East, has also added significant competitive pressure for some time on European hubs.

A comprehensive study, Airport Competition in Europe, has already been released in 2012, documenting and quantifying these developments. ACI Europe director general Olivier Jankovec made the obvious but valid point that airports cannot move to a better market location, unlike airlines which enjoy a wide choice of airports to fly from. All that airports can do is to work hard to make their market location more attractive.

This means that for every airport, offering competitive charges is a key business requirement, to retain existing traffic and attract new air services – and should be so without the need for regulatory intervention. Mr Jankovec said: “Now that we can no longer assume that the airport is the dominant party in the airport-airline relationship, surely the objective of airport regulation needs to be reconsidered – along with its scope and content. The potential benefits for the aviation sector and the travelling public are significant. We are pleased that the Commission seems to be willing to look in that direction and we very much look forward to contributing to the Thessaloniki Forum next month.”

They went on to say that if none of this can be achieved under the current framework, then improved legislation is necessary. The associations also noted that the "ever-increasing costs of infrastructure in Europe demonstrate the monopolistic nature of airports [presumably meaning that only large monopolistic organisations could afford the cost] and therefore the need for an effective regulatory framework. Because airport charges account for a significant proportion of airlines’ operating costs, bringing them down would increase the competitiveness of airlines to the ultimate benefit of the European consumer."

Clearly there is still a huge gulf between the positions of the respective parties.

Whether or not airlines and airports have been talking to each other, there remains a wide gap in charges at Europe’s busiest airports.

The data below is taken from CAPA’s Airports Charges & Benchmark Database and details the leading 20 European airports by passenger ranking in 2013, in groups of four.

In each case any known or planned construction work is highlighted, and an actual or estimated cost figure (data from the CAPA Airports CapEx & Construction Database).

The charges data are supplied to CAPA by the Air Transport Research Society and updated every six months.

For the purposes of this report, Istanbul is considered part of Europe but Moscow is not, hence the Domodedovo and Sheremetyevo airports are omitted. 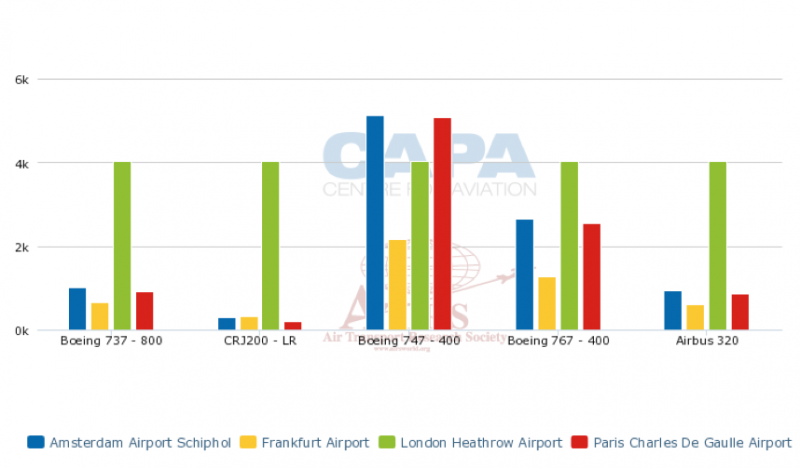 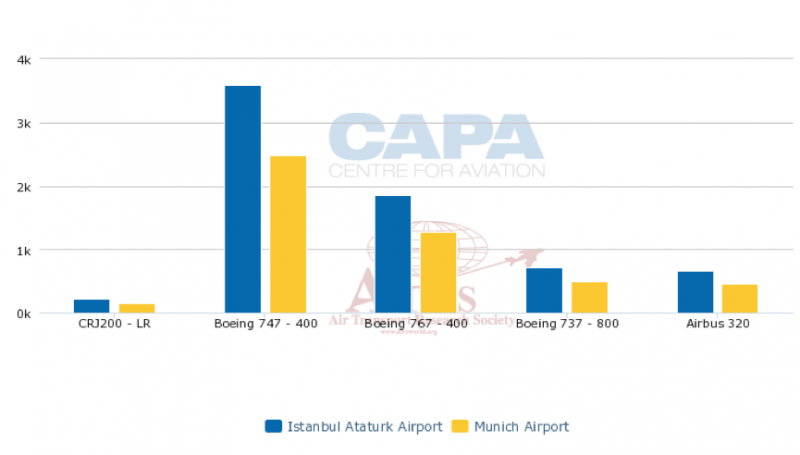 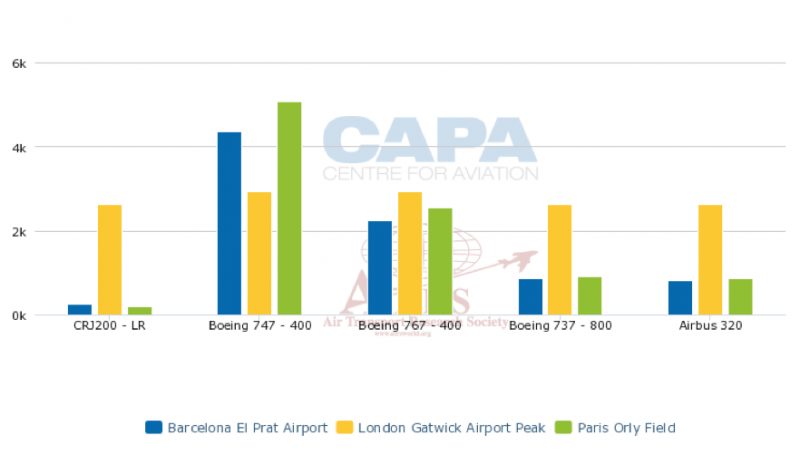 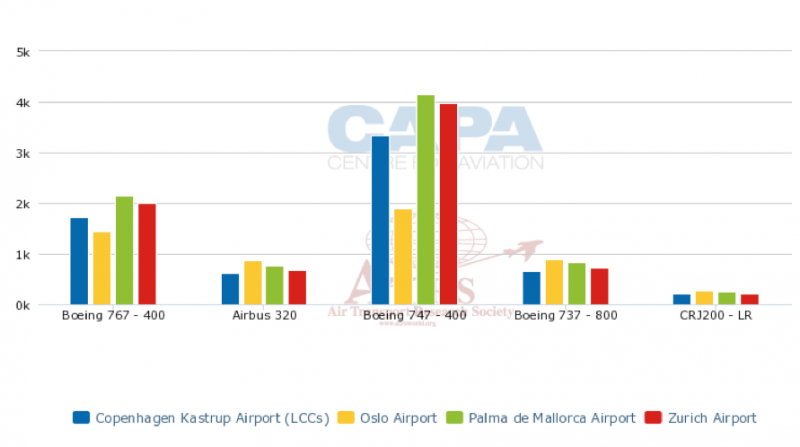 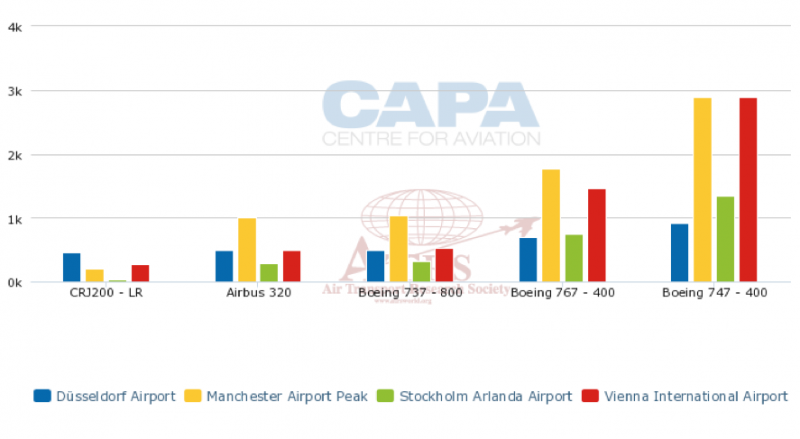 As previously mentioned, data can be provided in a variety of ways. The following chart for example compares landing charges at London Heathrow Airport by aircraft categorisation between 2013 and 2014. 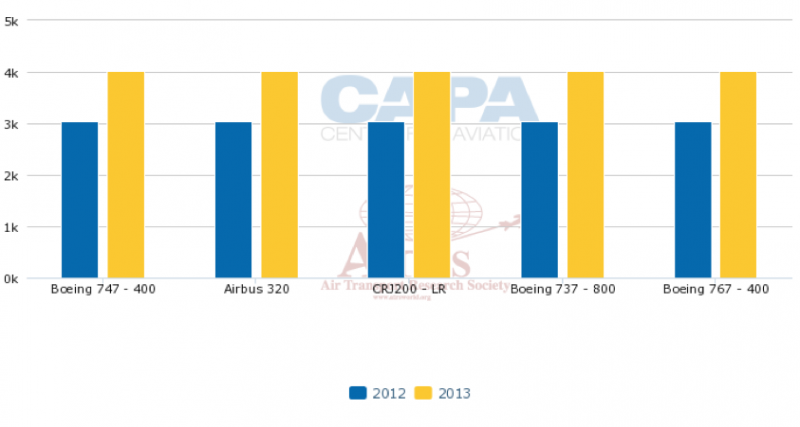 While this chart compares charges for Combined Landing / Terminal Charges with Baggage / Check-in at Frankfurt Airport over the same period. 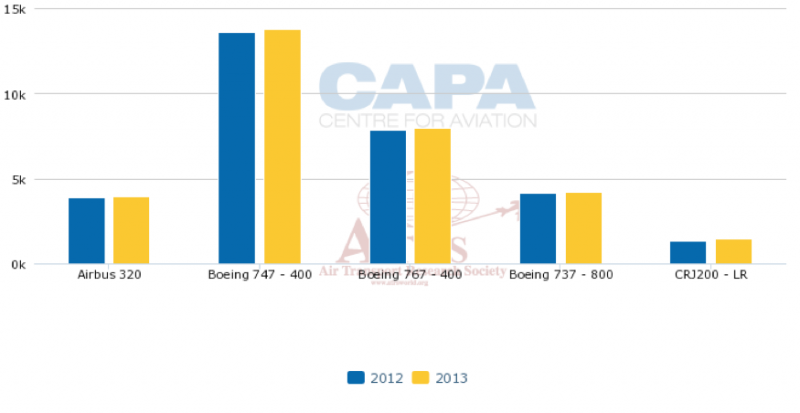 Data from CAPA’s Airports Charges & Benchmark Database can also be supplied in spreadsheet format for subscribers.