Among the hardest hit LCCs were Vueling, which witnessed a 6.0% reduction after the previous day’s 5.8% gain, while Norwegian Air Shuttle also experienced a share price slump of more than 5%.

Dart Group was the only European LCC to record a positive share price movement yesterday, with an 8% increase. The company, the parent of Jet2.com and Flower Welch Coolchain, released its financial results for the 12 months ended Mar-2010 on 24-Jun-2010, reporting a “reasonably satisfactory” profitable result in the year. See related article: ‘Geriatric’ low-cost airline, Jet2.com survives through diversity.

Meanwhile, shares in Ryanair slipped 1.5% on the same day the carrier announced plans to reduce UK winter capacity by 16% from Nov-2010, with the carrier stating the decision will result in the loss of more than 2 million passengers at UK airports over winter 2010 on a year-on-year basis.

At London Stansted, winter capacity will be reduced by 17% from Nov-2010. Ryanair will base 22 aircraft at Stansted in winter, a reduction from 24 the previous winter, with 135 fewer weekly frequencies and a loss of up to 1.5 million passengers at Stansted between Nov-2010 and Mar-2011. The LCC will also reduce winter capacity at most of its other UK bases, with the exception of Edinburgh and Leeds Bradford. Ryanair CEO, Michael O'Leary, added the decision could save the carrier GBP10 million. 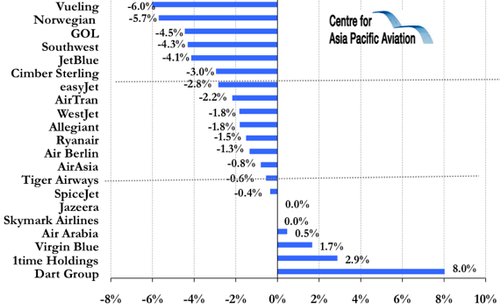