European airline shares fell on Monday (19-Jul-2010), pushed lower by wider markets. Shares were down on continued concerns of economic recovery after the US reported a greater than expected decline in home-builder sentiment for Jul-2010 to its lowest level in over a year.

Eurofly (+39.0%) soared after last week announcing an increase in paid-up capital to EUR13.7 million through the issue of another 714 million ordinary shares.

Norwegian (+1.5%) also gained after confirming an order for 15 additional B737-800s from Boeing. The order is valued at USD1.15 billion at average list prices and increases the airline's unfilled orders to 59 B737NGs. The new aircraft will be delivered between 2014 and 2016. Norwegian already has a pending order of 48 B737-800s from Boeing, with deliveries continuing through to 2014. In 2007, Norwegian ordered 42 B737-800s, subsequently increased to 48 aircraft. So far, four of these aircraft have been delivered.

Aeroflot (-0.2%) meanwhile slipped. It signed a firm contract with Airbus during trading for the purchase of 11 A330-300s. The newly ordered A330-300s will feature a two-class cabin layout seating around 300 passengers. The airline is planning to operate the aircraft on its long-haul network. Aeroflot ordered 24 Trent 700 engines to power the A330s. The order is valued at USD650 million at list prices and includes a long-term service agreement.

Elsewhere, Thomas Cook (-2.3%) and Cimber Sterling (-2.1%) were the day’s biggest decliners. Cimber Sterling announced during trading that CFO, Henriette Schütze, and CCO, Lars Bording, purchased 10,000 shares each in the carrier on 16-Jul-2010. 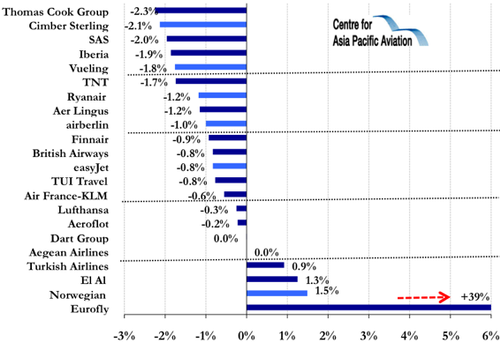