It was never a question of if Etihad Airways would report revenue growth in 1H2014; the only question was the exact double-digit percentage by which it would grow. Etihad reports group revenue increased by 28%, a remarkable figure even by fast-paced Gulf standards, and one that stole most headlines. But total revenue has also been positively impacted by Etihad's acquisition of ground-based services.

Passenger revenue grew by a "slower" 14% – below the 19% increase in ASKs, although probably not all that remarkable in the short term with this rate of expansion. Yields, load factor and RPKs (in addition to profit figures) were not disclosed. Possible slowing of momentum comes as Air France-KLM and the Lufthansa Group in a letter to the European Commission accused all  Gulf carriers of "excessive growth".

Etihad's acquisition of ground services has clearly helped add diversification to the model, with passenger revenue now comprising only 64% of total group revenue, lower than at Emirates or Lufthansa. Partner revenues are likely to surpass USD1 billion in 2014, but the more significant figure is 1H2014 partner revenue accounting for 23% of total passenger revenue. This too will grow as new partnerships – including major ones with Jet Airways and Alitalia – bed down. Putting planes into the sky is relatively easy; selling their seats is the challenge.

Leaving aside the controversy, Etihad is creating a remarkable new model that continues to grow multi-dimensionally in ways that detractors might be wise to concentrate on – rather than merely accelerating their efforts to rescind change.

This was a significant addition to Etihad's scale and scope, as the three companies brought an additional 4,006 employees and saw Etihad end 2013 with 17,593 employees. The revenue from this division was not disclosed, but the large increase in headcount is indicative of new revenue this brought Etihad and was fully realised in 1H2014 (as well as 2H2013). By the end of 1Q2014, Etihad Airport Services employees comprised 23% of group headcount. 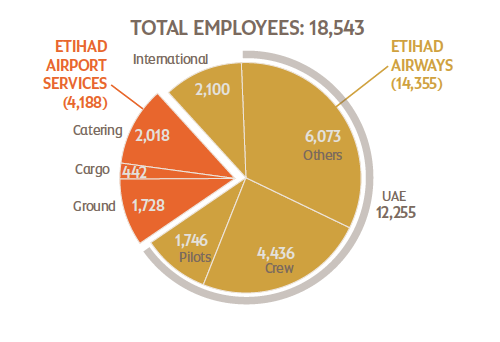 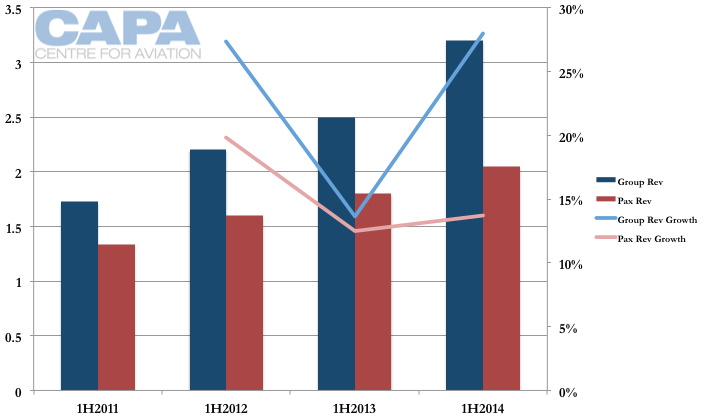 Revenue growth of 14% appears slower than ASK growth of 19%. Yields may be slowing

Etihad's 1H2014 revenue growth of 14% is in contrast to its 1H2014 ASK growth of 19%. Yields, load factor and RPKs are undisclosed (as well as profits and costs) so we can only hypothesise about Etihad's overall performance. Etihad stated 1H2014 passenger numbers were up 22%, but the exact implication is unclear since Etihad's network comprises very long and very short routes.

Based on the limited information disclosed, a likely scenario is that Etihad is growing passenger volume at the expense of yields, a not unlikely consequence of such rapid growth; but evidence over recent years has been that the catch-up rate has been faster than most new route/capacity addition on international routes.

IATA's 11.3% growth figure for the Middle East is in turn still nearly double the 5.8% global growth average. Middle East load factors in the first five months of 2014 are 79.8%, 1ppt higher than the global average, but again we are unable to compare load factors at Etihad specifically.

IATA airline performance by region: May-2014

A likely imbalance of passenger traffic at Etihad could give fodder to the Air France-KLM and Lufthansa Groups' opposition. The groups' division CEOs wrote a letter to the European Commission in Jun-2014 warning of "excessive growth". The letter said European aviation is "under serious threat from a number of different challenges. A major one is the excessive growth of third country carriers, supported by their governments as strategic industry to ensure future economic growth of their economies."

Although the letter did not single out Gulf carriers (or Turkish Airlines, which is causing arguably even greater pain to Lufthansa), it was clearly aimed at them and Etihad's recent acquisitions (Alitalia, as well as Darwin Airlines, although being based in Switzerland this is outside EC jurisdiction).

The revenue contribution from Etihad's codeshare and equity partners continues to grow, unsurprising given Etihad continues to add partners and expand existing relationships.

A 1H2014 highlight was the addition of JetBlue, which will help Etihad at the LCC's hub in New York JFK, where Etihad will have double daily services (in combination with Jet Airways). In Jul-2014 Etihad also announced a partnership with Gol. This will help feed Etihad's Sao Paulo service, delivering a small impact initially with potential to grow significantly in the long term.

1H2014 partnership revenue increased 24% year-over-year and was USD471 million. This positions Etihad likely to surpass USD1 billion of partnership/equity revenue for the first time in 2014.

Although a banner figure, the greater impact is apparent in the share of passenger revenue that codeshare/equity revenue contributes: 23% in 1H2014, up 3ppt from 1H2013's 20%. 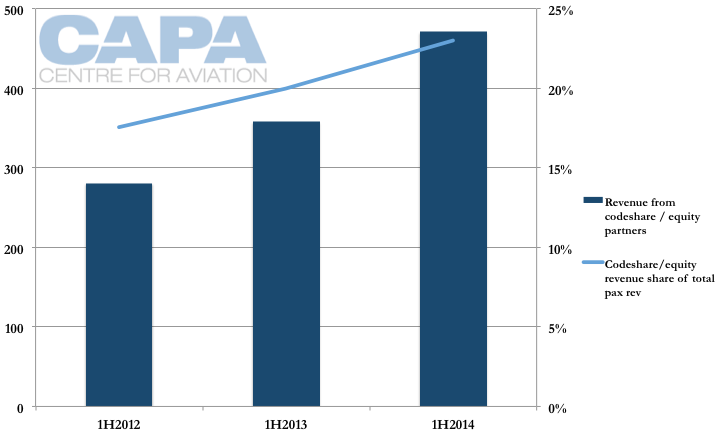 Notably, the partner revenue increase of 32% was more than twice as fast as Etihad's organic revenue growth of 14%.

Partnership revenue will continue to grow, and likely account for an even larger share of total passenger revenue, as Etihad beds down significant partnerships: Jet Airways and Alitalia. 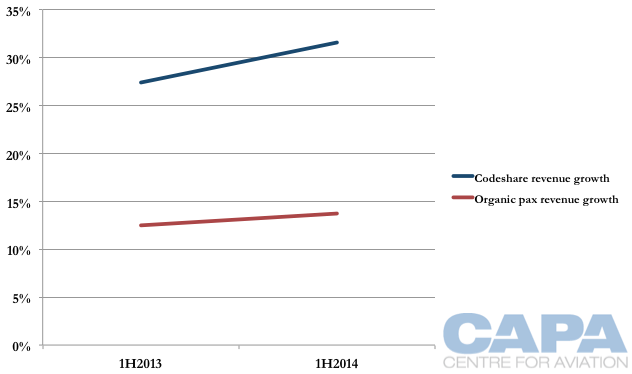 Passenger revenue is now only 64% of the group's total

Etihad did not disclose cargo revenue in 1H2014, but did say it grew 27% from 1H2013, when Etihad reported cargo revenue of USD411 million. That places 1H2014 cargo revenue at approximately USD522 million, which would comprise 16% of total revenue.

That leaves 20% of group revenue to other undefined functions. 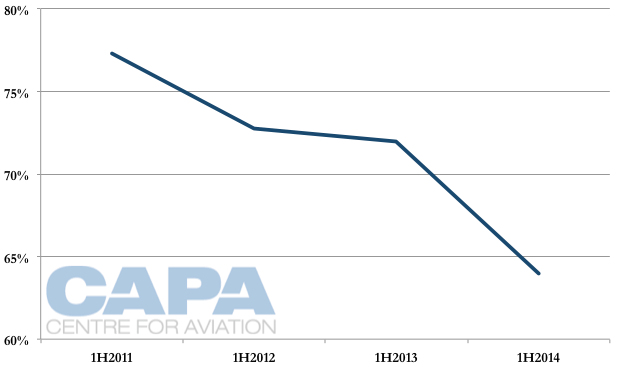 Etihad has continued to broaden its business base by acquiring Abu Dhabi Aircraft Technologies LLC (ADAT) from Mubadala, as well as the fixed wing training division from Horizon International Flight Academy. The latter will be used to create the new Etihad Flight College.

The Gulf carriers have turned their growth focus to North America, and Etihad is no exception.

Etihad added Los Angeles in Jun-2014 and will add Dallas in Dec-2014. Etihad launched a second daily New York JFK service in Mar-2014, which will be supported by Etihad's new codeshare with JetBlue that builds on Etihad's existing codeshare with American. Other new passenger destinations for 2014 are Medina, Jaipur, Zurich, Yerevan, Rome, Perth and Phuket.

Cargo volumes increased 25% to 268,713 tonnes, and one target for this division is Africa. New freighter services have been introduced to Dar es Salaam and Entebbe in Tanzania and Uganda respectively. This is consistent with IATA's freight outlook that says: "Carriers in the Middle East continue to see the highest rates of growth among regions, rising 9.3% in May year-on-year. Airlines in the region are benefiting from better conditions in advanced economies, but trade activity with emerging markets continues to provide a strong base for growth, with various goods passing through the Middle East hubs to Asia and Africa, for example."

Outlook: words of caution about the industry, but not necessarily Etihad

Etihad in its partial result statement reflected on the typical challenging environment of aviation, noting "the global airline industry has struggled with high fuel prices, intense competition and a slowdown in the cargo market".

However, Etihad distanced itself from saying these factors are impacting it. In many cases Etihad is contributing to the intense competition as the industry reshapes, has an efficient fleet (save for the A340s) and its cargo growth (from a volume perspective at least) is well above the industry average.

This is consistent with Etihad's earlier statements and arguably some conservatism is welcome. The full picture will be more evident when Etihad releases cost and profit/loss figures, which will come with its full-year results.

Until then, passenger growth and competition will continue, while partnerships take a new dimension with Alitalia and Jet. As if that were not enough for Etihad to manage, opposition is growing off the playing field as well.