National Air Services, parent company of Nasair, has announced regulatory approval to become a joint-stock company with capital of USD267 million, in preparation for the launch of an initial public offering. Approval is still required from financial institutions. Nasair expects to return to profitability in 2010. The carrier postponed plans for an IPO in 2008.

Saudi Arabian Airlines also plans to sell 450 million shares, or 30% of the company, in an initial public offering to be launched in 2011.

Air Arabia shares closed flat yesterday. The LCC announced plans over the weekend to install sky advertising messages in its aircraft cabins, firstly on tray tables, through US-based OnBoard Media Group, in a move to enhance revenues.

In Africa, Lonrho (-7.1%) shares slumped for reasons not immediately apparent. Kenya Airways was flat. 1time Holdings and Comair did not trade on Tuesday as the South African share market was closed for Freedom Day. 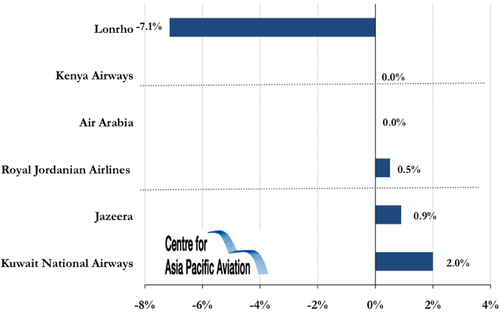 Source: Centre for Asia Pacific Aviation & Reuters
*It was a public holiday in South Africa on 27-Apr-2010