These would represent different markets from Emirates' core grouping of fifth freedom routes in Australia: to Australia via Bangkok, Kuala Lumpur and Singapore as well as from Australia to New Zealand. These routes comprise 77% of its fifth freedom network. Entry into other markets would be on more competitive ground where the market is more mature and also reliant on loyalty programmes, which Emirates is a bit shy on – but this could change substantially if it receives its wish and is able to partner with American Airlines.

Fifth freedom flights are a fraction of Emirates’ network

Emirates over 2013 will offer fifth freedom services on 18 city pairs, 16 of which are return services. The two that are just one way are also the only sectors on which Emirates does not carry local traffic. Emirates in 2013 will fly about 11,000 fifth freedom sectors (about 30 a day), a number that has been consistent over the last decade with some blips, according to OAG. But the average stage length of Emirates' fifth freedom services has increased from 2,300km in 2003 to 3,000km in 2013.

Fifth freedom flights are taking up a smaller proportion of Emirates' total passenger network: they accounted for 10% of ASKs in 2003 but only 5% in 2013. 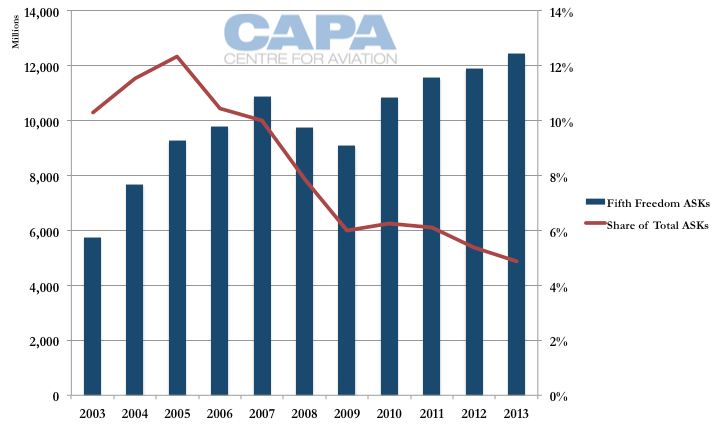 Additionally, Emirates operates trans-Tasman services between Australia and New Zealand. Eight city pairs are to/from Australia but have most of the longest fifth freedom distances and are operated mainly by large-capacity 777-300ER/A380 aircraft.

Source: CAPA – Centre for Aviation, OAG and Innovata
Note: Equipment type is most common for 2013

The purpose is multi-fold. New Zealand is too far to be economically served with non-stop services, creating the incentive for the tag flights from Australia to New Zealand. Local pick-up rights make the offer more attractive. Until Emirates' partnership with Qantas included trans-Tasman sectors, the carrier lacked scale, with only one flight a day compared to the three or more typically offered by competitors. But Emirates still found a niche as it deployed long-haul aircraf,t whereas competitors typically used short-haul aircraft with fewer frills.

The one-stop services from Dubai to Australia via Asia allow Emirates to match partial demand at its Australian and Asian ports and supplement it with local point-to-point traffic between Australia and Asia. Dubai-Sydney via Bangkok is only 3% longer in shortest theoretical distance than a non-stop flight. 2012 data from Australia's BITRE indicates Emirates' Sydney-Bangkok and Melbourne-Kuala Lumpur flights have about 20% of capacity filled by point-to-point traffic.

Brisbane/Melbourne-Singapore have about 28% of capacity filled by point-to-point traffic. While Emirates is often the lowest fare offering on those routings, like other Australian routes they carry a yield premium, especially when booked ex-Australia.

BITRE reports about 1.7 million passengers flew to/from Dubai-Australia on Emirates in 2012 via its one-stop and non-stop services (although this leaves out New Zealand passengers). But this is more than the available non-stop capacity between Dubai and Australia. Assuming Emirates' non-stop flights run at an average 80% load factor, then the remaining Dubai passengers combined with point-to-point Australia-Asia passengers would give its Australia-Asia services a load factor of at least 60% (the actual number would be higher once factoring in a much smaller proportion of traffic BITRE does not tabulate).

With Emirates now coordinating (including codesharing) with Qantas on shared routes, its performance should be significantly boosted as they leverage their combined network. In the cases of Bangkok-Sydney, Singapore-Melbourne and Brisbane-Melbourne, they will now jointly offer a double daily service, making their network more attractive. 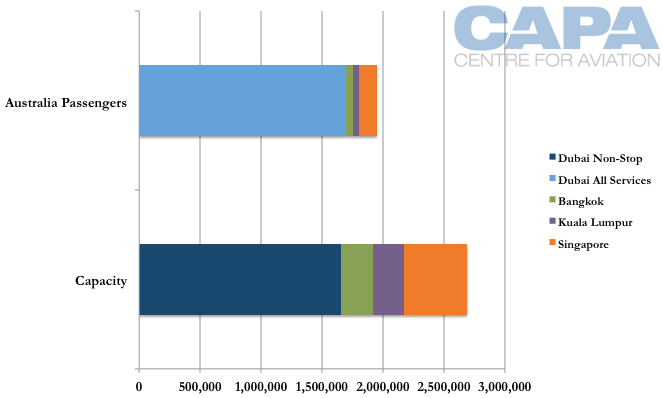 This is not unimpressive performance on the passenger side. On the cargo side Emirates is able to participate in the small and lower-yielding ex-Australia cargo market. The carrier in 2012 carried 40,900 tonnes of cargo into Australia from Dubai and 2,300 tonnes from Asia, about 2,200 tonnes from Asia alone, a disproportionately higher performance than Bangkok or Kuala Lumpur.

There are also a handful of fifth freedom routes in Africa

The next distinct group of fifth freedom services are intra-Africa, although these are comparatively small given Australia's dominance. But where local pick-up rights are offered, the segments can be lucrative given the lack of intra-Africa supply: the 402km route between Lusaka and Harare sells for USD370 return with taxes. (It is not as lucrative but the 1,996km trip from Buenos Aires-Rio de Janeiro sells for around USD440 – the cheapest option on the market.)

Emirates over time has converted cities like Dar es Salaam and Entebbe into non-stop services; previously they were served via other African points (like Nairobi and Addis Ababa). Although not in Africa, Emirates used to serve Jakarta via Singapore but now has non-stop services.

Hamburg-New York and Milan-New York go against the grain: neither emerging markets nor too far for non-stop

Emirates' two trans-Atlantic forays differ from most of its other fifth freedom routes that either link destinations too far or link emerging markets (even its one-stop services to Australia are through developing Asian markets). The cancelled Hamburg-New York JFK service was intended to target the large catchment area around Hamburg and northern Germany, but the competition was too strong and Emirates' offering inadequate. The carrier sees its proposed Italian service as being in a better-tested market where demand has receded in recent years and where the competition is relatively weak. 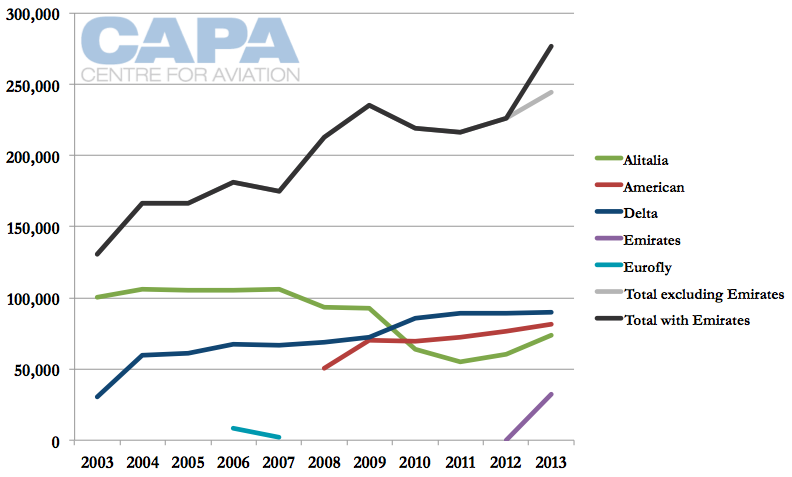 Emirates' rationale is that half of the market makes a stop elsewhere in Europe, of which it hopes to gain a portion, and that the market is deprived of a product like Emirates' (which may be true for hard and soft service, but less important frequent flyer relationships).

Emirates for some time has spoken of "connecting the dots" and offering greater fifth freedom services. The most recent talk is from northern UK to the US. Emirates' rationale is similar to Milan-New York: traffic is being routed through connecting cities and it could serve the market directly.

There has been no shortage of attempts: since 2003 there have been some 340 combinations of airlines linking city-pairs between the US and non-London airports in the UK.

As the introduction of ATI and soaring fuel prices have shaped demand in the latter half of the decade, it is worthwhile to look at just the largest 15 routes over the past five years.

There are some changes but the broad outline remains: Manchester takes the lion's share and almost all major routes cover the northern UK. The largest route – twice that of the next largest – is Virgin Atlantic's service from Manchester to Orlando, a heavily leisure route.

Looking at US capacity from non-London UK airports, Manchester's dominance is evident, although 2013 capacity is down 25% from its 2006 peak. 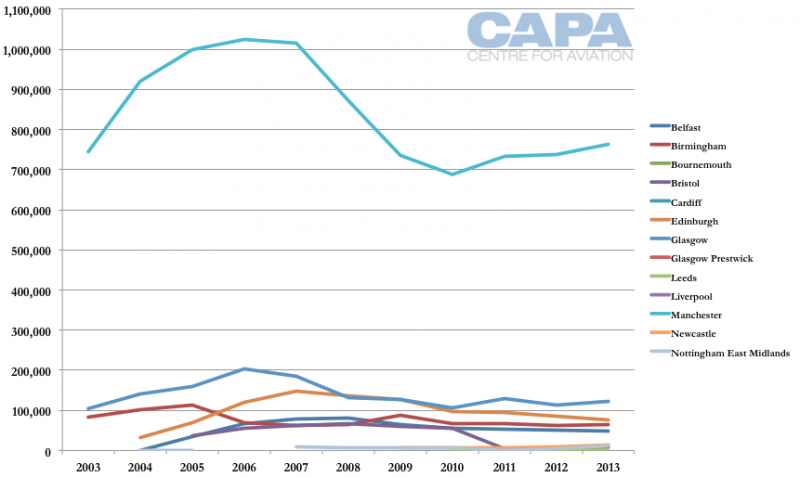 From the US side, there is less concentration of capacity but still a stronghold: the New York area accounts for 38% of seat capacity to non-London UK airports in 2013.

The Orlando area accounts for 30% of seat capacity and is highly leisure and package tour oriented, making it an unlikely route for Emirates. 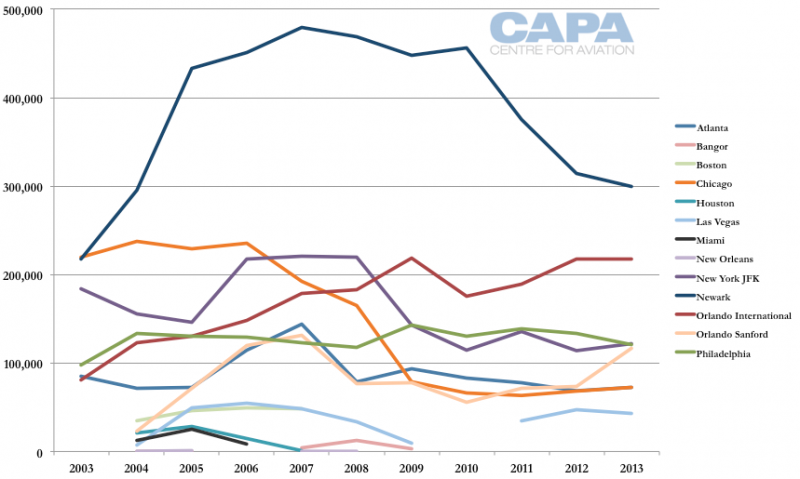 Emirates would need to address the matter of balance. Emirates' smallest aircraft to typically serve the UK is the "tiny" 777-300ER. While such a large aircraft may be appropriate and profitable for the Dubai-UK leg, it may be too much capacity for a thinner UK-US route. A smaller aircraft may be better suited across the Atlantic but not from the UK to US. This is not an insurmountable factor but nor is it a straightforward decision.

The trans-Atlantic market is now very cosy, effectively split up by alliances and their members' respective ATI agreements (with some exceptions reflecting a minority of capacity). The market is also mature and heavily dependent on frequent flyer programmes, a significant proposition Emirates knows all too well, as CEO Tim Clark, when announcing his carrier's landmark Qantas partnership, said the deal was driven by the market's "love affair" with a frequent flyer point.

Emirates' lack of depth in the US loyalty market is a hindrance, but one that could change pending a possible partnership with American Airlines, which Emirates for one is interested in. A potential failure of the US Airways merger would make that proposition much more attractive for American. But claiming a deep partnership with American across the Atlantic (more so than Etihad and American currently have) would need to be worked around American's ATI JV with British Airways, Finnair and Iberia. This is also not insurmountable but would require delicate balancing of partnerships.

Future growth: North America-Asia promising but partners would be nice

Emirates has also spoken of entering the trans-Pacific market. But here bilaterals are more constraining: Emirates has permission to operate beyond Osaka but not Tokyo. Unlike Dubai-Europe-US or Dubai-Asia-Australia routes, trans-Pacific services will be heavily dependent on local traffic. Whereas service from Dubai to the US via Europe or to Australia via Asia has circuitry of a mere few percentage points, Dubai-Osaka-Los Angeles is 25% longer than Dubai-Los Angeles non-stop.

There are a number of fifth freedom trans-Pacific services like SIA's Tokyo-Los Angeles or Seoul-San Francisco, but these originate in Singapore, adding not only another source of traffic but also using SIA's hub. Emirates would lack these advantages as it stands today but this could change as partnerships continue to evolve. Partnerships and alliances have been more conservative in Asia than elsewhere.

Outlook: Fifth freedoms will continue to be a minority of Emirates' capacity

There is no doubt Emirates will add further fifth freedom routes. While these may irk incumbents, they are an inevitable part of the equally inevitable progressive liberalisation process. Overall they will remain a fraction of Emirates' capacity, short of a radical re-think of air service agreements - that would undoubtedly be economically beneficial but would hurt some less efficient flag carriers.

Greater partnerships will help fifth freedom routes, as Emirates is gaining now with Qantas between Asia and Australia. In that market and the trans-Tasman Emirates has demonstrated success. In other major markets it still has to prove itself. Other innovative airlines will be watching the results carefully.

Many of the US' open skies agreements contain fifth freedom rights and there is sometimes scope for joining up the dots by using them - for example, between Australia and some Asian points, as well as within Africa. But US airlines are more focussed on making profits at home and on nailing down international ATI package deals where there is built-in risk reduction. It is the international movers who are blazing the trail to the future.

But often it seems that, when push comes to shove, fifth freedom rights do not always carry the value they used to have ascribed to them.