easyJet, Europe’s second-largest LCC, delivered an expectedly strong result for the quarter ended 30-Jun-2011 and increased its guidance for the full-year, which prompted a string of analyst upgrades and a 18% jump in the LCC’s share price, the most in eight years.

high fuel costs, demand disruptions from North Africa and the Middle East and ongoing low consumer confidence in key markets. easyJet’s result prompted a sharp rise in the share prices of rivals Ryanair and Aer Lingus, as investors expect to easyJet’s good fortune to spread to its peers.

easyJet does not provide quarterly net profit updates, but the LCC upped its full-year (12 months to 30-Sep-2011) pre-tax profit forecast to between GBP200-230 million, “assuming normal conditions and a ROCE for the year of between 10% and 12%.” Analyst consensus had expected a full-year pre-tax result of GBP180 million. The upgrade follows strong sales for the summer months, with 75% of all seats sold.

“The strong operational and commercial performance in the quarter reflects the continued successful implementation of the strategy we outlined last November,” CEO Carolyn McCall said. “Against the backdrop of high fuel prices and an uncertain economic environment, the strength of easyJet’s trading demonstrates it is well placed to succeed.”

Total revenue surged 23.2% in the period to GBP935 million on the back of an exceptional ancillary result and a sharp rise in the numbers of passengers travelling on business. Top line revenue growth outpaced a 17.3% rise in passenger numbers, to 14.4 million. It is worth nothing the quarterly result reflects service disruptions from Apr-2010 as a result of the Eyjafjallajokull volcano eruption, which closed European airspace for a week. 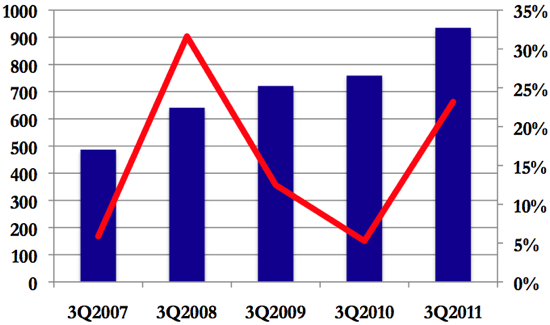 Total revenue per seat increased 5.6% to GBP56.02 on a reported basis and by 4.6% at constant currency. Passenger revenue per seat came in at GBP44.37, a 2.5% rise, with ancillary revenue (including checked baggage) contributing GBP11.65 on a per seat basis, a 17.0% increase. Ancillary revenues contributed GBP194 million towards the top line revenue result, a 36.9% increase. Ancillary revenues account for 20.7% of total revenue. easyJet attribute the strong revenue result to growth in “speedy boarding passes”, the maturing of capacity investments made in FY2010 and 1HY2011, and optimisation of fees and charges following management actions taken at the end of 2Q2011.

Corporate traffic, however, was a standout revenue generator in the period with the numbers of passengers travelling on business increasing 20%. easyJet outlined a new strategy in Nov-2010 which would see the LCC move more aggressively into Europe’s corporate travel market. easyJet launched a new fare category, known as “flexi fares”, aimed at the higher-yielding corporate traveller. The option was initially available only via GDS but has since been rolled out on the easyJet website. easyJet, which rejects its “low-cost” tag, has long served some of Europe’s major airports and corporate travel destinations so a more aggressive move in the maturing European LCC market was not altogether unexpected. Improved performance in the corporate space was supported by an improved operational performance, with on time performance (OTP) continuing to improve and came in over 80% for the quarter. The OTP result was a sharp turnaround on last year’s, when services were severely hampered by crew shortages and rostering problems at the airline’s main London Gatwick base in 3Q2010.

According to data from flightstats.com, easyJet’s OTP increase 12ppts to 78% in the nine-months to 30-Jun-2011. easyJet is now ahead of most of its full-service rivals in the OTP space, which is important in attracting and maintaining corporate travellers.

The strong result was bolstered by prudent capacity discipline, with easyJet once again affirming its industry-leading load factors. Load factors for the quarter were 83.3%, a 0.2ppt year-on-year improvement.

easyJet continues to diversify away from the UK, with capacity in mainland Europe up 21% in the quarter and the proportion of passengers originating outside mainland Europe up 3ppts to 55.3%. In Germany revenue per seat continues to be affected by the introduction of APD and performance in the UK regions reflects the impact of public sector cut backs, the LCC noted.

easyJet stated that on a reported basis, underlying costs per seat (ex-fuel) was in line with expectations, increasing 2.7% and by 1.1% on a constant currency basis.

Ground handling, navigation, maintenance, ownership and other costs all showed an improved performance on a per-seat basis (constant currency) compared with 3Q2010. Airport costs rose sharply in the quarter as price rises at a number of regulated airports took effect. easyJet expects this to continue over the next year.

Sir Stelios Haji-Ioannou, the airline’s founder and largest shareholder, said on 13-Jul-2011 that the LCC should halt a Jan-2011 order for 35 aircraft as the airline failed to confirm the plan with shareholders.

easyJet responded to Sir Stelios’ complaints, reiterating its position that easyJet's Jan-2011 fleet announcement “fully complies with the Listing Rules”, and saying it rejects all of his allegations of wrongdoing and invited him for a private meeting with the chairman. Sir Stelios last week accused easyJet directors of having an "incestuous" relationship with manufacturer Airbus. Sir Stelios’ letter followed an easyJet announcement that it had struck an agreement with Airbus to exercise options for 15 Airbus A320s for delivery between 2012 and 2014 and to secure new options over a further 33 A320s.

Sir Stelios’ objections to the airline’s strategy, which has been ongoing since 2008, has the potential to hurt the airline’s growth plans and has been a drag on the share price.

Fleet plans to continue regardless

easyJet took delivery of 11 A320 family aircraft and returned aircraft to lessors in 2Q2011. As at 30-Jun-2011 the fleet was comprised of 203 aircraft. Given the high cost of fuel, uncertain consumer demand across Europe and the introduction of the Emissions Trading Scheme in January 2012 easyJet stated it is taking a "cautious" approach to capacity deployment.

As easyJet has previously stated, it is utilising the flexibility in its fleet planning arrangements to ensure the fleet is held at a maximum of 204 aircraft for the next two winters. Consequently, winter FY2012 seat capacity is planned to be flat on 2010 levels with growth in number of seats flown for the whole of FY2012 of no more than 4% and will be focussed on the key markets "which we want to defend and invest in". Beyond this period there will "continue to be opportunities to grow profitably in the mid-term and easyJet has the flexibility in its capacity plans to take advantage of such opportunities", the carrier said.

Capacity will be re-allocated to support growth in “priority markets”, which will see frequencies added and schedules improved on key business routes and unprofitable routes closes. CEO Carolyn McCall has said easyJet will be far more ruthless in terms of route development and capacity deployment, which saw the LCC pull out of the Finnish market in Jun-2011.

The pre-tax result upgrade was a result of stronger-than-expected summer bookings, with 75% of seats already sold, Ms McCall stated.

Despite the strong result, the airline stated there are pockets of weakness, most significantly on North African routes, which continue to show some weakness due to concerns about the political situation. Spanish routes are also showing patches of softness, following redeployment of tour operator capacity. In Germany, the introduction of the government’s APD has put downward pressure and hurt revenue from the country. In regional UK, ongoing economic uncertainty and public sector cut backs continue to create difficulties for easyJet.

These problem, however, have been more than offset by the revenue per seat growth on capacity based in France, Switzerland, Spain, Italy and London. There has been particular strength on the city routes where the airline invested in capacity in the first half of the year, Ms McCall said.