Worldwide LCC share prices were generally mixed on Friday (10-Jul-09), on a day which saw NYMEX oil prices fall below USD60/barrel. The price of oil dropped 10% last week as fuel stockpiles increased for a fourth consecutive week, with NYMEX oil falling to the lowest settlement since 19-May-2009.

easyJet, Air Berlin and Ryanair slipped 2.5%, 0.3% and 0.2%, respectively, in a generally weaker day for European equities.

Shares in Virgin Blue remained stable on Friday, closing at at AUD0.305 per share. The carrier's shares have today been put under a trading halt until Wednesday, as the carrier reportedly plans to raise up to USD400 million. Virgin Blue expects to have performed according to the guidance it gave in 2008 for FY2008-09, which stated it would have difficulty breaking even. The carrier stated that, considering the continuation of the global financial downturn and swine flu outbreak that occurred since the guidance was released, the carrier had performed well, due to capacity and cost cutting measures. 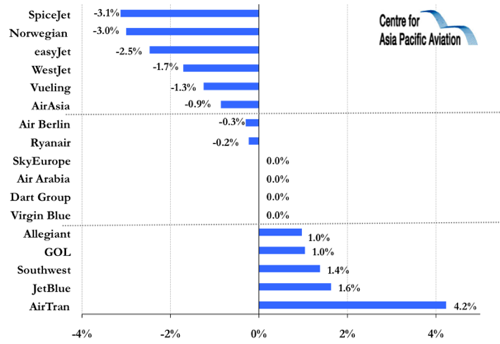