Comparatively, Ryanair (shares down 1.8% yesterday) handled 4.4 million passengers in the month, more than three times that of easyJet, but showing a smaller year-on-year increase of 6%. However, like easyJet, load factors weakened in the month, slipping 3 ppts to 75% (or a massive 10 ppts lower than easyjet levels). In the 12 months to Feb-2010, Ryanair handled 65.9 million passengers with an average load factor of 82%.

Ryanair announces 41st base in Malta

Ryanair announced plans to open its 41st base at Malta in May-2010, with one based aircraft and 19 routes (six of which will be new, including services to Billund, Bologna, Krakow, Marseille, Seville and Valencia). The base is expected to deliver up to 800,000 passengers p/a on over 120 weekly services.

In other European LCC traffic news, Monarch Airlines reported a 3.2 ppt load factor improvement in the month to 82.3%. The carrier added that services to Alicante to Faro and Tenerife saw the biggest year-on-year improvements, while the "Canaries success story continued", with Gran Canaria and Fuerteventura, both recently added to Monarch’s scheduled network, seeing over 5,000 passengers each during the month. Overall passenger numbers were, however, not provided.

Shares in Air Berlin slipped 0.5% yesterday, as the carrier and Vereinigung Cockpit (VC), the German pilots' union, agreed to hold negotiations on unresolved issues of the framework collective agreement. As a result, the warning strikes announced by VC have been called off. VC had called for a three-hour warning strike earlier this week to fight for better working conditions for pilots at Air Berlin's charter airline unit LTU, with working hours on long-haul services at the core of the dispute. 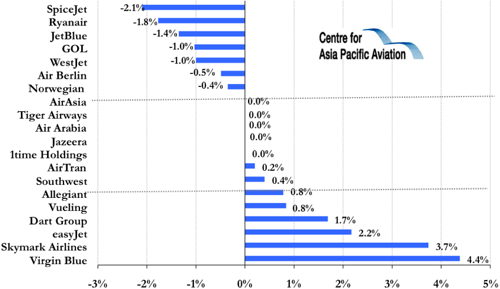