Global low cost carrier stocks were weak on Friday with growing concerns the EU’s austerity measures would slow economic recovery and growth in the region. European stocks retreated. The Paris CAC 40 Index dropped 4.59%, London’t FTSE 100 lost 3.14%, while Frankfurt’s DAX slowed 3.12% lower. The Euro also fell to an 18-month low against the US Dollar.

Founder resigns from easyJet board

Meanwhile on Friday, easyJet founder, Sir Stelios Haji-Ioannou, resigned from the position of non-executive director on the carrier’s board. Robert Rothenberg, a Stelios nominee, also resigned from the board. Both sit as representatives of easyGroup, a 26.2% shareholder of easyJet. Sir Stelios resigned his position in protest at the carrier’s planned rate of capacity expansion and to gain greater freedom to exercise easyGroup's rights as a shareholder. easyJet's board approved a growth rate in Jun-2009 of approximately 7.5% growth p/a over the medium term. He and his easyGroup holding company are also in a legal dispute with the carrier over the amount of revenue easyJet can derive from non-ticket sources. A court hearing is scheduled for early Jun-2010 and a decision from the courts is not expected until autumn 2010.

Sir Stelios told the Daily Telegraph that “your only weapon as a non-executive is to resign. As a shareholder I may have stronger rights as I can discuss it [the number of planes] with other shareholders without being in possession of inside information. I think profits will go up if the number of aircraft stops growing. I have given up trying to change things from the inside. Now I'm going to do it from the outside”. 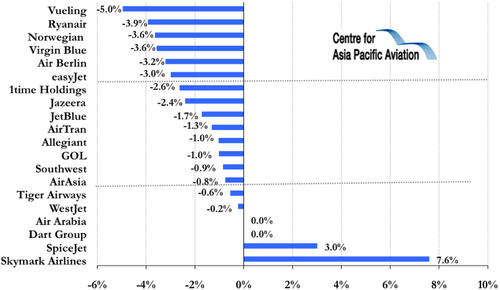