easyJet and Ryanair handled a combined 12.9 million passengers in Aug-2010, with easyJet reporting a 8.4% increase in passengers to 5.2 million and Ryanair recording a 12% jump in passenger numbers to 7.7 million – or 2.5 million more than easyJet.

Elsewhere, Vueling reported record traffic in Aug-2010 with a 4.8% year-on-year increase in passenger numbers in the month to 1.3 million, while load factors slipped 2.6 ppts to 82.1%.

Meanwhile, the turbulence continues for Cimber Sterling, which witnessed a 3.5% share price slump on Monday following a 2.0% gain on Friday.

On Friday, TV2 Finans reported that Danish businessman Karsten Ree saved the LCC from the brink of bankruptcy. The airline was in mid-Aug-2010 reportedly close to declaring bankruptcy according to reports, but is said to have received a life-saving DKK50 million (EUR6.8 million) loan from Mr Ree.

The airline was reportedly turned down for loans from several banks following the ash cloud crisis in Apr-May-2010.  Mr Ree is reported to have loaned the airline the funds just hours before it had to declare itself bankrupt, according to reports in The Copenhagen Post.

Separately, the carrier, on 03-Sep-2010, reported that its 1Q2010/11 performance was “in line” with management expectations, and confirmed: “Cimber Sterling has obtained intermediate funding which is expected to be maintained until a loan with partial government guarantee is established and/or the refinancing of aircraft has fallen into place."

The carrier reported a 33% increase in passengers, unchanged yield levels and a 27% revenue increase (to EUR71 million) in the quarter, with a CASK ex fuel reduction of 13% (11% including  fuel).

Meanwhile, adjusted EBIT (taking into account the EUR1.5 million loss due to the airspace closures) was a  EUR134,000 profit (compared with a EUR3.4 million loss in 2009/2010) marking the carrier’s best performance in a quarter “in recent years”. Unadjusted EBIT was a loss of EUR1.3 million. The carrier will release its full interim report for the quarter on 15-Sep-2010. 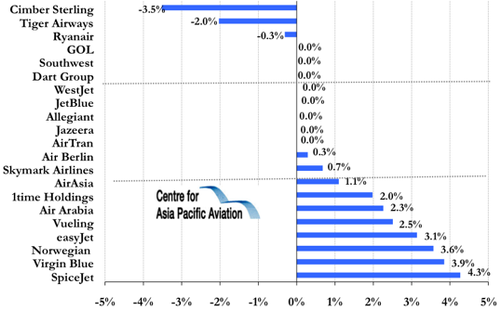 Source: Centre for Asia Pacific Aviation, Yahoo! Finance & Reuters
*06-Sep-2010 was Labour Holiday in the US