Rolls-Royce gained 1.4%, on news that its power systems unit had received GBP73 million in orders to support several Chinese gas pipeline projects. German engine manufacturer, MTU Aero Engines, was also up on Monday (+1.8%), despite indications late last week that European governments may reign in some of their planned Eurofighter acquisitions, which would affect both MTU and Rolls-Royce.

Online travel and booking company lost 2.6% on more news covering the various lawsuits the company is faced with at the moment. Expedia will reportedly have to pay out more than USD120 million to a class-action lawsuit after bundling its hotel charges with tax recovery charges and service fees, violating consumer protection legislation. 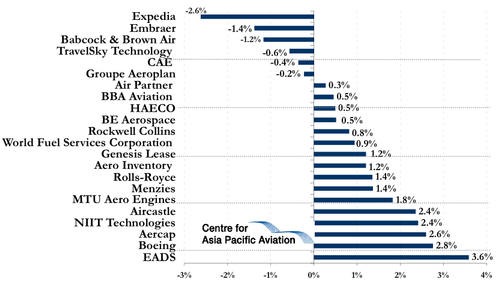