Shares in JetBlue declined 0.7% on a weaker day for LCCs worldwide. Also on Friday, JetBlue stated PRASM for Aug-2010 increased 12% year-on-year, in line with company expectations. The carrier handled 2.3 million revenue passengers in the month, a 6.6% year-on-year increase, with an average load factor of 86.4%, a 0.2 ppt reduction.

Virgin America President and CEO, David Cush, said: “Even with significant increases in fuel costs during the quarter, our top line progress continues to exceed our expectations as a young and growing airline. Despite the rough economic climate since our launch, we remain on track with our original projection of achieving a full year operating profit in 2010."

Mr Cush added that bookings for the remainder of September and October commenced to pick up early this month, making the carrier "much more confident" heading into autumn, with the carrier adding that it has seen “significant” increases in traffic, bookings and average fares in the third quarter, in line with the overall positive trends for the industry.

In South America, shares in GOL increased 0.3% on Friday. Also on Friday, GOL signed a commercial agreement with NOAR Linhas Aéreas, a Brazilian regional carrier, to sell the latter’s tickets in all its sales channels. The carrier, on the same day, launched codeshare services with American Airlines between Sao Paulo and Salvador, Belem, Brasilia, Curitiba, Fortaleza, Manaus, Natal, Porto Alegre and Recife, as well as between Rio de Janeiro and Porto Alegre 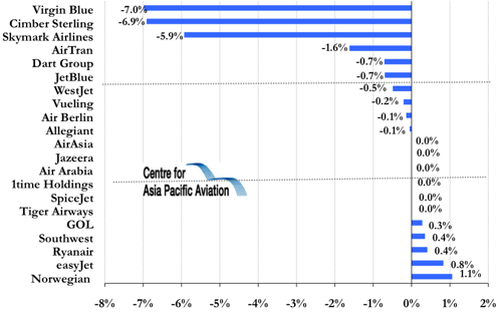