IAG recently announced the conversion of 18 options to buy Boeing 787 aircraft for delivery to its UK subsidiary British Airways between 2017 and 2021. These new orders, which need confirmation by IAG shareholders, are in addition to 24 firm orders already in the pipeline and leave BA with a further 10 options. IAG also secured an undisclosed number of 787 delivery positions for Iberia, demonstrating the improved purchasing power of the merged entity.

The conversion of the 18 options will mean BA has a total of 60 firm aircraft orders in place with Boeing and Airbus, more than at any time since the 1990s. In the early 2000s, the global economic downturn, Iraq War and SARS all led to a seemingly permanent cut in BA’s level of capital expenditure. BA’s average fleet age has crept above the world airline average as it has focused smaller capital sums on product improvements, rather than new aircraft, but demand does not seem to have suffered. Will the fuel savings offered by new generation aircraft force it to change direction once again?

BA fleet almost 100 aircraft below its peak, with average age around 13 years

British Airways’ Group fleet currently stands at 270 aircraft, more than at any time since the mid 2000s, but almost 100 fewer than the peak in the early part of that decade.

British Airways fleet, orders and options: as of 4-Apr-2013 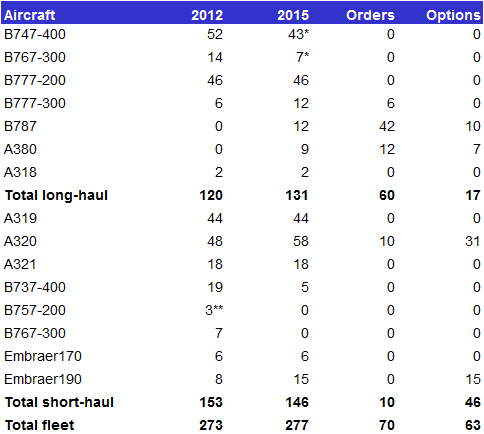 As a consequence of many years of reduced capex levels, BA’s fleet has grown older, with a number of aircraft types, notably its 737, 747 and 767 fleet approaching the final few years of their economic lives. 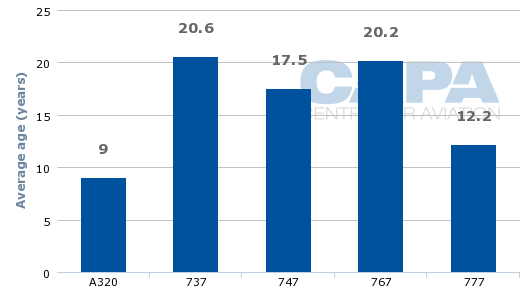 The overall average age of BA’s fleet is now close to 13 years and has been above the world fleet average age for a couple of years, after being younger than the global average for at least two decades previously. In 10 years from 2002 to 2011, BA’s average fleet age grew from just over seven years to between 12 and 13 years.

Average age in years of British Airways and world airline fleet: 1992 to 2012 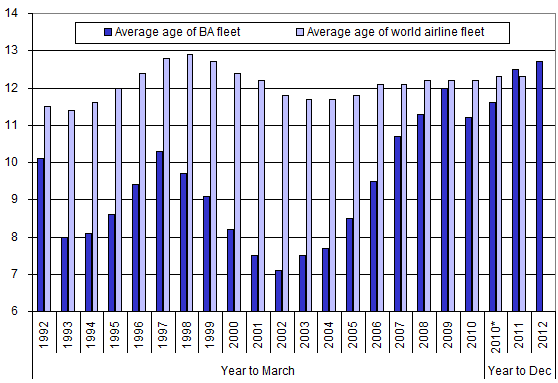 British Airways has been lagging world airlines in its level of capital expenditure as a percentage of sales. Whereas, through the 1990s and early 2000s, it used to spend more than 10% of sales on capex each year (reaching a high of 18% in the year to Mar-1999), this fell to 4% during FY2003 to FY2007 and has been no higher than 8% over the past decade. For the world’s airlines, capex has remained a double figure percentage of sales throughout the past two decades.

Capital expenditure as a percentage of sales for British Airways and world airlines: 1992 to 2012 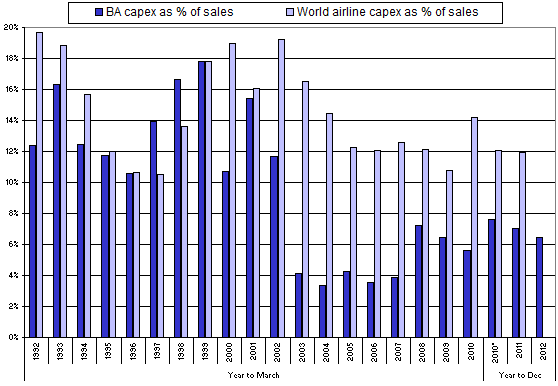 Since 2002, capex has averaged less than GBP500 million p.a., versus more than GBP1 billion in the 10 years before then. Of course, the lower levels of capex have directly led to the increase in BA’s average fleet age since FY2002. An increase in capex levels from around GBP300 million p.a. in FY2003 to FY2007 to around GBP500 million to GBP700 million since then has helped to slow the ageing process, but not yet to reverse it. 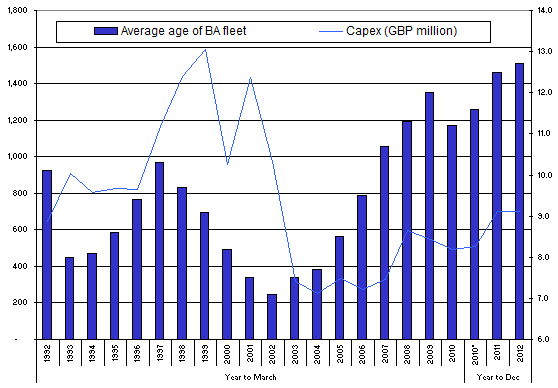 Lower levels of capex have also meant a reduction in the size of BA’s fleet since the early 2000s. Although the bmi acquisition lead to a net influx of 25 narrowbodies in 2012, the current figure of 270 aircraft compares with a peak of 366 in FY2000. 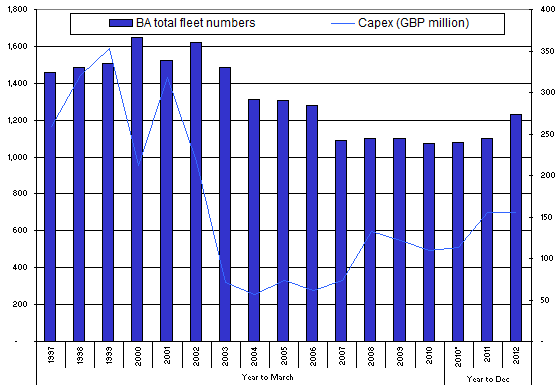 New aircraft are mainly for replacement, not growth

The recent conversion of 787 options does not, however, signal a major change in BA’s fleet strategy. It has 66 old widebody types (747 and 767) in the fleet and 60 firm orders (plus 17 options) for new wide body types (787 and A380). This assumes that the conversion of 18 787 options is confirmed by IAG shareholders. The narrowbody fleet still contains 19 old 737-400s and BA has 10 firm orders and 31 options for A320 family aircraft. These numbers leave scope only for modest rates of growth and highlight that the new aircraft will be used to replace ageing, high fuel-burn aircraft.

The company has said that it assumes capacity growth of around 2% to 3% p.a. to 2015, building on the opportunity unlocked by the Heathrow slots acquired with bmi and the Boeing 787 aircraft. Its growth will be biased towards North America, Asia and partner hubs.

BA has not published a detailed delivery schedule for its aircraft orders, but its annual report, the annual report of its parent IAG’s, press announcements and the IAG 2012 capital markets day presentations indicate the following

Based on these parameters, and assuming that Boeing is able to resume 787 deliveries at some point this year, the following illustrative delivery schedule can be postulated:

While BA has stuck with low capex levels and allowed its fleet to age over the past decade, it has also done a good job of squeezing more pounds in sales revenue from every pound of fleet book value. The ratio of sales to book value of fleet fell from FY1992 to FY2003 as BA’s high capex levels led to an expanding capital base, but not to a proportional increase in revenues. This ratio has now regained its early 1990s levels, reaching more than 180% in 2012.

Furthermore, this improvement has not been done the easy way – i.e. by increasing the proportion of operating leased aircraft that do not show in the fleet book value since they are off-balance sheet. Although an upward trend in the ratio started in FY2004, the significant uptick in 2011 and 2012 suggests that the merger with Iberia is having a beneficial impact on the use of BA’s capital assets.

British Airways sales/book value of fleet and operating leased aircraft as a percentage of total fleet numbers (%): 1992 to 2012 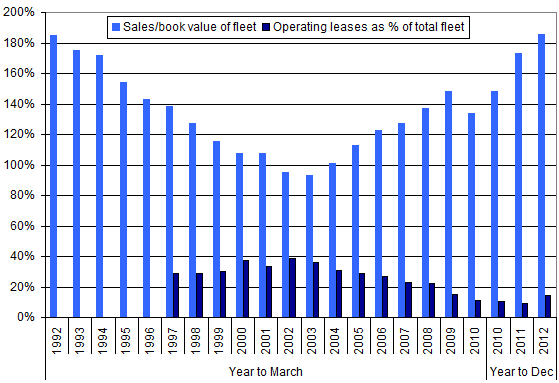 Asset turn vs margins – which way next?

Return on capital is the combination of asset turnover – making more sales from the capital base – and profit margins. Unfortunately, the many one-off events and fuel price increases that buffet the industry have not allowed BA’s profit margins to enjoy the same improvement as its asset turnover.

Achieving this may require BA to make a more comprehensive move to new generation aircraft and their lower fuel burn, but this could compromise the improvements in asset turn. IAG’s planned capex levels of EUR1.9 billion to EUR2.0 billion in 2013 and 2014, with the lion’s share going on the BA fleet while Iberia restructures, suggests that BA is returning to the years of capex close to the GBP1 billion mark.

It remains to be seen whether it will continue at these levels or return to the more prudent approach of the past decade. A difficult strategic choice for BA, especially as it seems that its conservative policy, focusing smaller sums on cabin refurbishment and product updates, rather than on new aircraft, met with some success over the past decade. It almost certainly also saved BA from bankruptcy.