A USD15 million stimulus grant is helping fund the rehabilitation of a Detroit Metropolitan Wayne County Airport (WCCA) runway. WCCA will open a newly reconstructed runway nearly a year and a half ahead of its previously planned schedule - and just in time for the Nov-09 Thanksgiving vacation ‘rush’ (assuming there is one this year) - thanks to the grant provided by the American Recovery and Reinvestment Act (ARRA), also known as the economic stimulus package. The project is expected to create nearly 225 local jobs, according to WCCA and work is the most important four letter word to found in the local vocabulary.

The (total) USD34.6 million rehabilitation project had been scheduled to launch this summer as a two-year project. However, with the addition of the ARRA funding, officials were able to revise their time table to complete construction in just five months. Reconstruction on Runway 9L/27R began on 29-Jun-09, and is expected to be finished by the forthcoming Thanksgiving in Nov-2009.

In addition to accelerating construction at the Detroit Metro Airport (DTW) the ARRA grant is responsible for creating nearly 225 full time-equivalent jobs according to WCAA CEO Lester Robinson. “The grant has allowed the airport to maximise the project’s short-term economic impact in the region”, Robinson stated, adding that he was pleased the funding has allowed the county to rehabilitate “a critical piece of transportation infrastructure…and put people to work” at the same time.

It may be that the downturn has given the city authorities time to re-assess priorities; it is certainly a convenient window for reconstruction at the airport as Robinson points out. “Along with the economic factors, the project has given us the opportunity to accelerate the reconstruction during a summer when our airlines already anticipate operating fewer flights. The timing of this project is ideal for everyone.”

Work is the critical word

Work, or the lack of it, is of course the critical word in this part of the United States momentarily.

Detroit is one of the many US cities where President Obama intends to raze miles of redundant, post-credit crunch housing to the ground to be replaced by parkland. The nation’s fourth largest city in the 1950s, it had regressed to 11th largest by 2008, with just under one million inhabitants, as the mass exodus either to the suburbs, to the new industry sunshine states like Florida, Texas, Arizona and California, or even across the Detroit River into Canada, continued unabated. (The metropolitan area has a population of around five million, declining at a similar rate and now Windsor {pop 240,000}, just across the Detroit River, is also similarly affected by Detroit’s demise, registering an unemployment rate of 14.4%, the highest in Canada).

Municipal authorities in the city-region may not be issuing IOUs instead of cheques as California is, but the area has been more badly affected by the economic downturn than most as the traditional motor industries that gave the city its Motown moniker, already on their last legs, have had to be bailed out to the tune of USD22 billion already, and by one measure the city is burning through USD9 billion a month in supporting funds. In fact, the buzz phrase is that Michigan is a ‘one-state recession’ of its own, with unemployment almost universally over 15% (Jun-09) with Detroit’s own rate at 22.6% in Apr-09, more than twice the national average. According to one estimate, Michigan is heading for 100% unemployment within a year from now.

No stranger to recession

But the region is no stranger to recession and over the past 20 years or so significant changes have occurred at WCCA, broadly in line with attempts to modernise and reposition the city as a whole as the heavy metal gas guzzlers that GM, Ford and Chrysler had spewed forth for decades were replaced by smaller, lighter, greener and more fuel efficient foreign models. That modernisation was manifested as an attempt to identify the city as an important centre for global trade.

A 2004 Border Transportation Partnership study showed that 150,000 jobs in the Detroit-Windsor (Canada) region and USD13 billion in annual production depend on the City of Detroit's international border crossing with Canada. Anyone travelling from the US, west of Ohio, into Canada’s economic driver province of Ontario and beyond (or vice versa) will choose the Detroit-Windsor border crossing by default. The Ambassador Bridge is claimed to be the single busiest border crossing in North America, carrying 27% of the total trade between the US and Canada. Apart from this critical road gateway the area also has, like Chicago but on a smaller scale, important rail connections (one of them also cross-border), and ports that handle more traffic than on all the Great Lakes combined.

This degree of transportation access has prompted a number of international law and accountancy firms to choose Detroit for their northern US headquarters over rivals like Cleveland, Minneapolis and even Chicago. In the suburbs, emerging technology companies (biotechnology, CIT, nanotechnology etc) have set up shop – in theory the drivers of recession busting growth although the Fortune 500 companies resident in Detroit remain as mostly those from the declining automobile industry.

The largest city in the US to offer casino gambling

Strangely, Detroit is the largest city in the US to offer casino gaming, with MGM Grand Detroit, MotorCityCasino and Greektown Casino (there is a large immigrant population in Detroit, especially in the Metropolitan County city of Dearborn where Arab Americans and especially those from Lebanon, comprise almost a third of the population), joined by Ceasar’s Windsor across the border line. The casinos have brought new tax revenue and jobs to the city. Gaming revenues have grown steadily, with Detroit ranked as the fifth largest gambling market in the USA in 2007. When Casino Windsor is included, Detroit's gambling market ranks third or fourth.

WCCA has been trying to keep up with this strategic change in direction for the city-region. As early as the late 1980’s a major capital development programme was undertaken, which resulted in a host of new and expanded facilities. The construction of the North Terminal Redevelopment Project represents the last major element of that programme. The new North Terminal, which opened in Sep-08, replaces the existing Smith (50 years old) and Berry terminals - making WCCA one of the newest, most operationally-capable and efficient airports in North America. Together with the USD1.2 billion McNamara Terminal, which opened in 2002 to rave reviews, WCCA features two new terminals, nearly 150 gates, six jet runways, and two modern Federal Inspection Services facilities for international arrivals. The USD430 million North Terminal was financed with bonds to be paid off with revenues from a USD4.50-per-ticket surcharge.

Detroit’s airport was consistently ranked among the nation's worst airports until the McNamara Terminal opened. By 2006, travellers ranked it #2 among the largest US airports in the annual consumer satisfaction survey by J.D. Power and Associates.

Many of the gates were unused in the North Terminal when it opened but the airport authority has tried (successfully) to attract new international services such as Rome and Shanghai after it was realised that the new terminal might be able to capture new business from Chicago and Cleveland airports.

That will be necessary to stem the declining passenger and cargo traffic (see the following three charts). 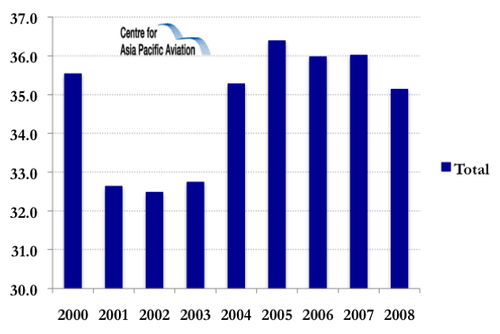 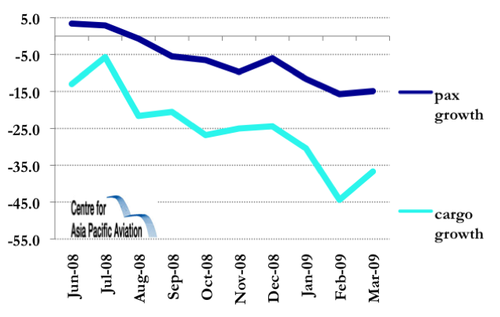 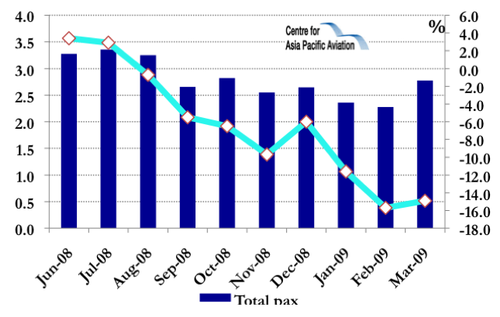 The need to define a new plan for the next 20 years and changes in passenger and baggage processing has resulted in the initiation of a Master Plan (http://www.metroairport.com/programs/DTWMasterPlan/StakeholderInvolvement.asp). The plan’s task is “to ensure that WCCA continues as a world class hub airport and economic engine for Southeast Michigan.”

A strategic part of the economy

Following several high profile visits, the government has determined that Detroit is a "strategic" part of the economy. Saving ‘The Big Three’ (automobile manufacturers) is deemed as important as keeping the nation's large banks operating to maintain the flow of credit. But as some observers have pointed out, there is nothing strategic about Detroit itself in that sense. Over 50% of the cars sold in the US are made by foreign companies. There is no reason that the number cannot go to 80%. It serves the national interest to save the jobs in Detroit and in related industries while the economy is in trouble. But it is hard to make the case that any broader national interest will ever be served by keeping the US car industry afloat indefinitely.

For Detroit to have a future it will be one divorced from the remnants of the auto industry and will embrace the new technology, leisure and transportation industries mentioned earlier. Those businesses need the support of a modern functioning airport; however it is funded, be it by bonds as in the case of the latest terminal, or by an emergency stimulus package grant. And that is what it has.

It is both amusing and illuminating to read of Detroit’s ‘sister cities’. They include Toyota in Japan and Turin in Italy, the home of FIAT, both for evident reasons. But they also include Dubai and even Basra in Iraq, an acknowledgement of the city’s Arab connections. It is in those directions that the city, and its airport, needs to look.