Despite some of the year’s strongest capacity cutbacks by Europe’s full service airlines, the decline in demand (RPKs) is still outstripping efforts to cut supply (ASKs). Load factors also appear to have turned a corner, and not one for the better, recording steady declines over the past three weeks and threatening to drop back to the alarmingly low levels witnessed in early 2009.

For the week ended 10-May-2009 (Week 19), total traffic for Association of European Airlines (AEA) members was down 9.9% year-on-year. This is one of the most severe declines this year, with the exception of the traffic variations due to the later Easter in April 2009 as compared to March 2008. 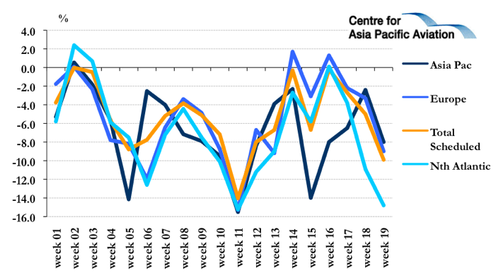 The greatest weakness was seen once again on trans-Atlantic routes, with RPKs down a concerning 14.8% during Week 19. After recording its first positive growth for the year of +0.1% in Week 16, North Atlantic demand has fallen off substantially more than either Asia Pacific or European trans-border traffic in the past three weeks. The recent conclusion of a comprehensive EU-Canada Air Transport Agreement clears the path for the introduction of a common aviation area encompassing the EU and Canada and the air routes between the two, which could help stimulate more capacity between the markets.

Asia Pacific traffic was down 8% during Week 19, while European trans-border traffic dropped 9%, the largest decline since Week 13.

Total scheduled ASKs dropped 5.2%, the strongest reduction in traffic since Feb-2009. While AEA members continue to reduce capacity, the falls in demand are still outstripping their attempts to restrict supply. 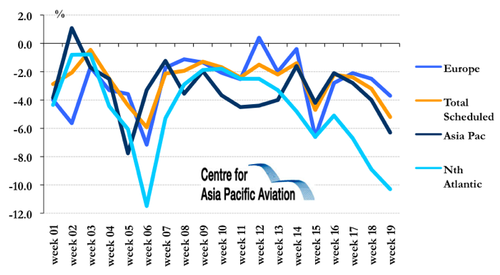 Capacity on the North Atlantic declined most, down 10.3%, as demand between Europe and North America continues to struggle. Intra-Europe capacity was cut back 3.7%, while Asia Pacific ASKs fell 6.3%.

Load factors on the decline

After a generally positive upwards trend over most of the year, load factors have entered their third week of consecutive declines, averaging 71.5% across AEA carriers for Week 19. 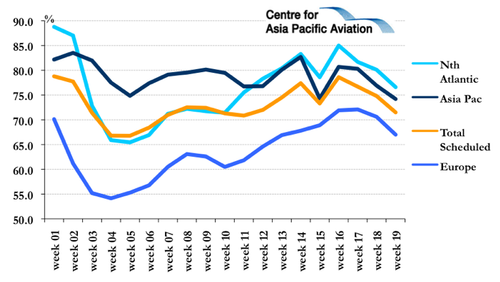 Several key European carriers reported stronger load factors over Apr-2009, but the recovery is not yet translating into better yields. Air-France KLM noted that while load factors were 80.5% in Apr-2009, up 0.6 ppts, the improvement was “not accompanied by any recovery in unit revenues”.

Major route cuts appear inevitable for AEA members. For example, Aer Lingus last week announced it would reduce aircraft based at Belfast and Dublin, temporarily suspending some services. In typically abrasive style, the measures were described by Ryanair CEO, Michael O'Leary as akin to “simply rearranging the deck chairs on the Titanic.”

AEA recently members welcomed the decision by the European Commission to suspend the ‘use it or lose it’ slot provisions at European airports. The decision will allow airlines to cut capacity without having to worry about foregoing grandfather rights to slots, particularly at congested airports. AEA Secretary General, Ulrich Schulte-Strathaus, warned that a downside to the decision is that airports are “all too ready to increase their charges to maintain their profit levels".