Major shifts in the three major global airline alliances during the last few weeks have triggered a bevy questions regarding the future of those tie-ups. But just as Qantas attempts to forge a broad agreement with unaligned Emriates, British Airways has convinced reluctant members to allow Qatar to join oneworld and Air France has reversed its stance to embrace Etihad and airberlin, SkyTeam partners Delta and Air France are bolstering their presence in the US-France market.

It is not clear if Delta could benefit from the new Air France-Etihad tie-up that entails codesharing on flights to Abu Dhabi, but eventually Delta’s connecting customers in Paris could utlilise connections to the Middle East opened up by the new non-SkyTeam partnership.

Beginning in the northern hemisphere summer of 2013, Delta is introducing new flights from Newark Liberty International Airport to Paris Charles de Gaulle, and new seasonal flights from Boston to Paris. Delta also plans to add another daily flight from its Atlanta hub to Paris, which will increase to four the combined number of daily services offered by Delta and Air France on the pairing.

Rounding out the increased service to Paris is the transition of Delta’s seasonal Detroit-Paris service to year-round, accompanied by an aircraft upgauging from Boeing 767-300s to Airbus A330-300s.

While Delta overall is slashing its trans-Atlantic capacity by 5% during 4Q20212 as a precautionary measure to protect itself against the weak economic climate in Europe, France remains a solid market for international travel to the US.

Data from the US Department of Commerce show that during 2011 US travel and tourism exports to France increased 18% year-over-year to USD5 billion. Even as visitor statistics from France to the US have fluctuated since 2004, during 2011 the US hosted 1.5 million visitors from France, a 12% increase from the year prior, which made France the seventh largest travel market for the US.

Foreign visitor spending in the US: 2011

Based on current schedules in Innovata (14-Oct-2012 to 20-Oct-2012), Air France and Delta represent roughly 72% of the seating capacity between the US and France.

It is not hard to see why the airlines will seek to exercise maximum value from their immunised trans-Atlantic joint venture (a partnership among Delta, Air France-KLM and Alitalia) and strengthen their leading position. 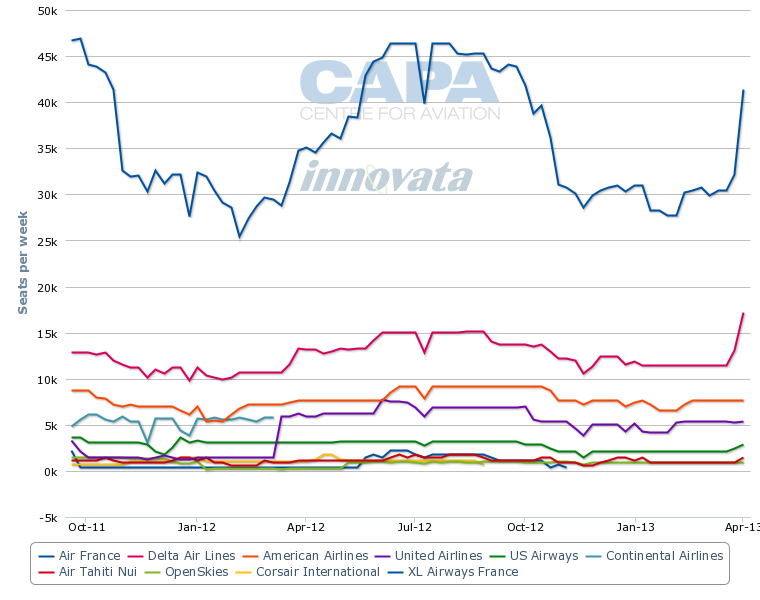 Once the latest additions are incorporated by Delta, the carrier will offer service to Paris from 11 US markets. Presently, the airline operates flights to Paris from its hubs in New York, Atlanta, Salt Lake City, Minneapolis, Detroit and Cincinnati. Additionally, Delta offers service from Seattle, Philadelphia (seasonal service) and Pittsburgh to Paris.

With the exception of Philadelphia, that serves as a hub for US Airways and New York JFK, Delta and Air France are largely uncontested in those markets. Philadelphia is a hub and transAtlantic gateway for US Airways, which presently offers 1,806 seats in the market, and schedules in American’s roughly 3,150 seats on offer from New York JFK to Paris represent 19% of the total seat share in the market, with Air France accounting for 65% and Delta holding a 10% share.

The decision by Delta to launch new service from New York Newark is an effort by the carrier and its SkyTeam partner Air France to gain control of the New York-Paris market as they launch a new assault on United’s dominant position on service from its Newark hub to Paris.

Delta stated the new flights from Paris to Newark would complement the existing service offered by the SkyTeam partners between JFK and Paris, and Delta’s existing flights from New York to Amsterdam, a hub for SkyTeam partner KLM. Air France cancelled its Paris-Newark flights with the launch of its summer 2012 schedule, leaving United as the lone carrier on the pairing. 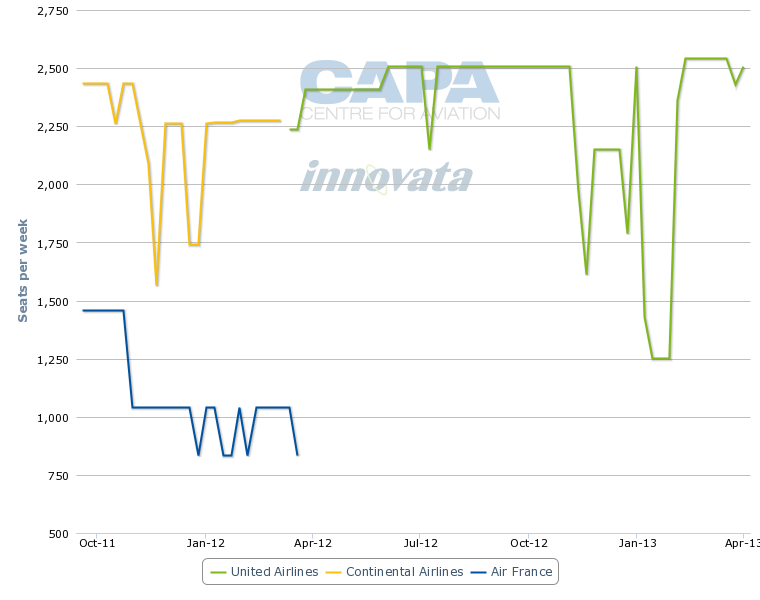 Leveraging service from Newark to solidify its leading position in the Paris-New York market is a key move for Delta and Air France. Department of Commerce data show that during 2011 the New York area accommodated roughly 45% of the visitors from France travelling to the US, while the mid-Atlantic region in the US held a 48% share.

Based on current schedules in Innovata (14-Oct-2012 to 20-Oct-2012), Delta and Air France combined offer 11,747 weekly seats between the New York metropolitan area and France, compared with 2,506 operated by United. Oct-2012 marked the beginning of the IATA winter scheduling season for the northern hemisphere, and with the launch of Delta’s new flights from Newark, it appears that Delta and Air France are working to keep their lock on the New York-Paris market.

Representation of visitors from France to the New York metropolitan area: 2010-2011

The new service from Boston to Paris by Delta complements Air France’s existing service in the market and builds on Delta’s existing flights to the Amsterdam hub of partner KLM. Delta’s new flights will also help to once again solidify SkyTeam’s position to Paris. Presently, Paris Charles De Gaulle is the second largest international market from Paris in terms of ASKs, and schedules in Innovata show that American’s flights will end the week of 21-Oct-2012 to 27-Oct-2012, and the carrier’s website does now show direct flights from Boston to Paris available in Nov-2012.

While it is not clear if American will return to the market, Delta and Air France through the new service are continuing their strategy to widen the gap of their dominance in the US-Paris market. 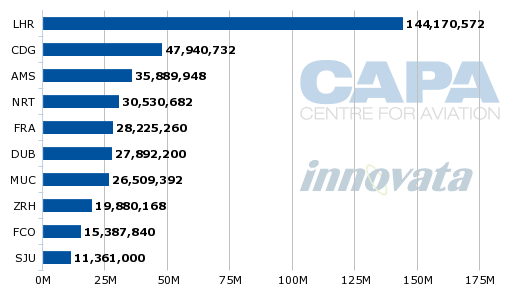 It is early days in the new world of Gulf carrier alliance participation, so it is not yet clear how Delta’s planned US-Paris expansion - set to commence in 2013 - will affect the carrier’s capacity plans for 2013. Some seasonal routes eliminated at the start of the winter 2012 timeframe including Athens, Barcelona, Milan, Prague and Rome might not return in lieu of connections through Paris if economic conditions in Europe continue to weaken.

Delta has repeatedly stated that the capacity lever is key to its management of volatile fuel prices and global economic weakness, so it will carefully examine adding back service to some of those secondary European markets if the solid demand that has remained in place during 2012 fails to carry over into 2013.

But the spool-up of US-Paris service by Delta reinforces its commitment to joint venture partner Air France-KLM and the SkyTeam alliance at a time when the dynamics of global airline groupings are undergoing significant shifts driven by the rise of the big three Gulf carriers and their desire to broaden the depth and breadth of their network offerings.

See related article: Etihad ties up with Air France-KLM; next Qatar-oneworld and the aviation world turns on its head

The recent Air France-KLM tie-up with Etihad to enhance its presence in the Middle East, while technically outside the agreements forged among SkyTeam partners, could create some spill-over benefit for the expanded Delta passenger base in Paris. Similar to Delta’s deep and expanding relationship with non-aligned Alaska Airlines in Seattle, passengers in both Seattle and Paris travelling on the SkyTeam partners will gain access to the networks of Alaska and Etihad despite the benefits of items like frequent flyer reciprocity being absent. While those types of benefits are important to high-yielding business travellers, network connectivity increases the competitiveness of all carriers, regardless of their alliance membership.

Strengthening of the trans-Atlantic joint venture between Air France-KLM and Delta as the Gulf carriers rise to prominence and forge strategic partnerships with the world’s largest airlines highlights the increasing balance that forward-thinking alliances need to strike in order to build the proper networks to remain viable in the fast-changing global airline market place.

Members of SkyTeam and oneworld seem to understand that developing strategic partnerships outside their respective groupings to offer comprehensive service worldwide is the normal course of business. Star, however, seems stuck in protectionist mode, and in danger of losing strength due to its outdated philosophies. That attitude may change as events unfold around lead airlines Lufthansa and United. The new realignments have a long way to run yet.