North and South American airline stocks were mostly higher on Friday (15-Oct-2010), as oil prices declined 1.7%, to USD81.25. The rise was despite a slip in the Dow (-0.3%) for the session, pushed lower by disappointing results from General Electric and a decline in the finance sector.

Delta Air Lines (-0.6%) slipped for the day. Over the weekend, the carrier stated it is adding 1000 flight attendants, many of which will be allocated to work on more profitable international routes, as global demand for travel improves. As part of the recruitment process, 425 flight attendants who were on a voluntary furlough will be appointed while the remainder will be new hires. Many of the positions require candidates to speak Dutch, Spanish, Japanese or Mandarin. The new positions would result in a 5% increase to the carrier's work force.

United Continental Holdings was flat, despite Citi initiating coverage of the merged entity with a ‘Buy’ rating and a target price of USD34. The carrier ended trading at USD26.15.

The stocks have been gradually rising since the two carriers officially merged on 01-Oct-2010, commencing trading at USD25.00. However, the stock has slipped over the past few days. 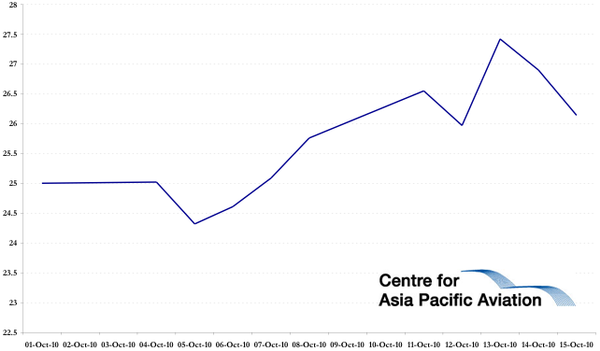 AirlineFinancials.com announced it expects the nine biggest US carriers will collectively report USD2.4 billion in profits for 3Q2010 on USD33.3 billion in revenue, with an average net profit margin of 7.2%.

Delta Air Lines is predicted to post the highest profit and revenue figures at USD740 million and USD8.8 billion, respectively. United Airlines is expected to have the second highest result, with analysts on average estimating it will report a profit of USD484 million. 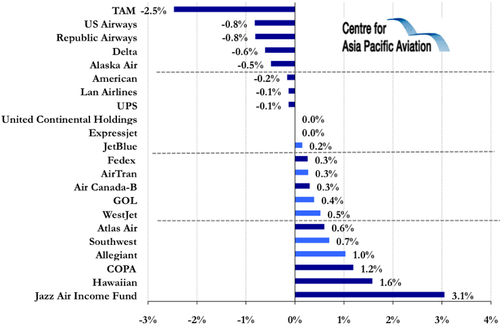