Delta contributes to US regional consolidation - selling Mesaba and Compass

As part of efforts to focus on its core mainline business, Delta is continuing the process of unbundling its regional operations, selling Mesaba and Compass – both acquired with Northwest – to Pinnacle Airlines Corp and Trans States Airlines, respectively, for USD82 million. The proceeds from these transactions will be used by Delta for general corporate purposes.

Trans States said nothing after the Delta announcement, largely owing to the fact it is a privately held company. However, Pinnacle released a statement and held a brief analyst webcast.

"This transaction brings together very strong and very similar organisations and will make us much stronger together than any one of us – Pinnacle, Mesaba or Colgan – would be on our own," said Pinnacle CEO Philip Trenary. "Together, we will be well positioned to be a major competitive player for the long term. Even as long-time competitors, Pinnacle and Mesaba have comparable values and goals, built around safety, respect for our people, customer service and operational excellence. We have very similar fleets of regional jets and turboprops, and we fly complementary routes with schedules that are already integrated as part of Delta Connection."

"We at Mesaba are excited about this partnership and the opportunities that it can provide," said Mesaba President John Spanjers. "Pinnacle is no longer a competitor but a partner that shares our common goal of success and offers growth opportunities with other major carriers."

The announcement took some analysts by surprise and they questioned why Pinnacle would increase its Delta portfolio at a time when it is trying to diversify. Trenary led his comments during yesterday’s webcast by saying Pinnacle was facing challenges with its limited CRJ900 fleet. “We needed more CRJ900s and Mesaba had the opposite problem in that they didn’t have enough CRJ 200s so the combination is a good thing all around.” 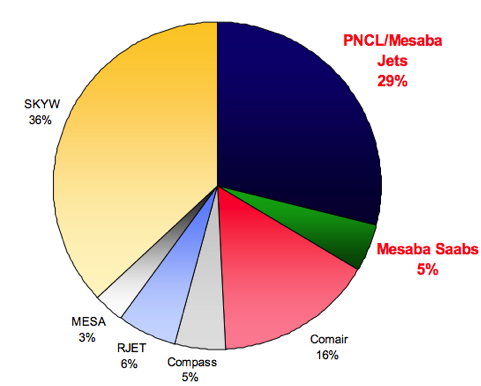 Pinnacle CFO Peter Hunt said while it is true the company is diversifying, one of its primary competitors was Mesaba. The two airlines had not only gone to the mat competitively but had endured the long and excruciating Northwest bankruptcy together and later the integration of Delta and Northwest.

“With Mesaba, our fleet will actually be large enough to make a difference to Delta,” he said. “In addition, our CRJ 200s have the longest contract in the industry so we believe that any reduction in Delta’s CRJ-200 fleet will come out of other regionals. Finally, no other carriers would have given us the same level of synergies as we have with Mesaba. The biggest reason it makes sense is it has good cash flow, good profitability over the long term, Delta is a good partner and mutually beneficial for both.”

Pinnacle is banking on synergies produced by a merger between Mesaba and Colgan as well as other factors to produce cash flow of USD12 million-18 million annually over 12 years, all incremental to its current cash flow. The deal includes reimbursements for capex to support the fleet and operations but not depreciation which will pressure operating income in some periods, said the carrier.

The contract also calls for rates to be reset in 2013 and 2018, similar to Pinnacle’s CRJ-200 contract. However, Pinnacle will incur integration costs through 2012, which will be offset by productivity enhancements until the 2013 reset. But it noted that contract cash flows are expected to be at the lower end of the range during the integration phase. The company added that its profitability is dependent on substantially wringing out costs. It said there were many opportunities for Delta and Pinnacle to work together to achieve more efficient cost structures. Non-pass-through revenues of about USD200 million are expected annually.

“We are inheriting a company with a strong balance sheet and no debt which means we are targeting zero working capital and few liabilities beyond the normal accounts payable,” said Hunt. “We are also inheriting all the long-term assets needed to support the business.” He noted there was no aircraft risk since they would also be inheriting the leases on the Mesaba aircraft.

The transaction is a continuation of a consolidation trend in the regional sector and positions Pinnacle as a strong player in the field with ultimately an operation for jets and another for turboprops. For now, however, Pinnacle, with about 7,700 employees, will continue to operate three subsidiaries – Pinnacle Airlines Inc, Colgan Air Inc and Mesaba Aviation Inc. The idea is to merge Mesaba and Colgan. Mesaba would be the surviving carrier because it has the infrastructure to support a large turboprop airline, according to Trenary. Colgan also flies for Continental, US Airways and United.

"Over the longer term, we anticipate that we can enhance efficiency and growth opportunities … by reorganising around two operating airlines," said Trenary. "Our intent is to combine the regional jets under Pinnacle Airlines and the turboprops under Mesaba Aviation. However, there are many complex issues to be addressed, and this will take time."

Pinnacle was divested from Northwest in 2003 after an initial public offering. In 2005, Delta sold Atlantic Southeast Airlines to SkyWest. The sale leaves only a single owned regional, Comair, at Delta. Based at Delta’s diminishing hub at Cincinnati, the future of Comair has been an open question for some time. It has not been seen as a good acquisition target by other regionals owing to its union problems and costs.

Meanwhile, American Airlines recently reiterated its intention to sell American Eagle. The two mainline carriers were following in Continental’s footsteps when it sold ExpressJet in 2002 and later divested all ownership in the regional carrier. ExpressJet has continued to struggle since then. When American put Eagle on the block in 2008, it could find no takers and drew back on its plans as it focused on rebuilding American. US Airways also owns several of its regionals and contracts out to others.

Ever since American began the process of acquiring its regional partners, regional executives have questioned the practice, saying it only served to raise overheads and didn’t do much for the profitability of the operation. Indeed, one exec suggested that American doubled the management overhead after it acquired Command Airways in the late 1980s. Indeed, most regional programmes – owned or not – have been unprofitable for their mainline carriers, despite the fact individual regional carriers have continued to post enviable profitability. Delta was the sole exception having streamlined its regionals before it merged with Northwest, although last year the Connection program posted losses while United and Alaska regional operations posted profits. Even so, mainline carriers often count incremental revenues from feed as more meaningful from basic profit/loss statements.

Delta has focused a great deal of energy and investment in the past half decade in its regional operation in order to make their service more seamless with the mainline. It has upgraded interiors to offer first-class cabins, enhanced food service, jetbridge boarding and other amenities.

“This transaction is another step in positioning our regional airlines for future success and we look forward to delivering even more improvements to customers in the more than 260 communities our partners serve,” said Delta Connection Senior Vice President Don Bornhorst. "Today's announcement reflects our continued focus on streamlining the portfolio of Delta Connection carriers serving our customers to ensure each partner airline is independently positioned for success with a competitive cost structure and an industry-leading focus on safety, reliability and customer service.”

Trans State Holdings, a privately held company, will take Compass for USD20.5 million. The acquisition of Compass by Bridgeton, Missouri-based Trans States adds a new client to the carrier’s capacity purchase stable which now includes United and US Airways and a the new 10-year contract for Compass to continue as a Delta Connection.

Compass is a member of the Delta Connection programme, operating more than 170 flights each day to 35 airports. Based in Minneapolis-St Paul, Compass was founded and built by Northwest as a regional feed solution. It operates a fleet of 36 aircraft and employs nearly 1,000.

Pinnacle, one of the largest Delta Connections, is acquiring Mesaba for USD62 million, which the company said was 100% financed by Delta with a five-year repayment term at 12.5% interest. It is collateralised by Mesaba simulators, flight training devices as well as stock.

Based in Minneapolis-St Paul, Mesaba is a member of the Delta Connection programme serving MSP, Detroit and Memphis, operating more than 430 flights each day to 95 airports. The airline operates a fleet of 92 aircraft and employs nearly 2,000 across its route system. Founded in 1944, Mesaba has operated as a Northwest Airlink and Delta Connection carrier since 1984. It is also the longest-flying regional airline in the US. 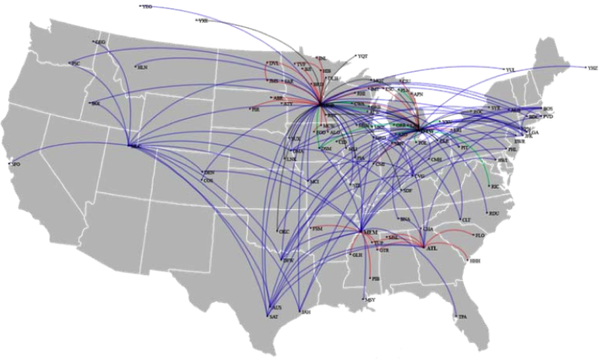 Under the terms of the transaction, Pinnacle and Delta cut a new 12-year capacity purchase agreement effective July 1, 2010, for the operation of Mesaba's CRJ-900 fleet. This new CRJ-900 agreement is structured similarly to Pinnacle's existing agreements with Delta, providing for targeted levels of performance and profitability. Mesaba will continue to sublease its fleet of 57 CRJ-900 aircraft from Delta for the 12-year term of the related capacity purchase agreement. Pinnacle’s current Delta Connection agreement runs through 2017.

Pinnacle was also able to resolve existing commercial issues with Delta included a disputed one-time adjustment factor on the CRJ-200 fleet which resulted in no change to Pinnacle’s rates. While its dispute with Delta that aviation insurance should have always been a pass-through cost, the two agreed that it will be in the future. However, Pinnacle will not receive any retroactive payments.

Mesaba's CRJ-200 operations will be governed under Pinnacle's current Airline Services Agreement with Delta, which runs through 2017. Delta also cut a separate, short-term capacity purchase agreement with Pinnacle providing for the operation of Mesaba's Saab 340B+ fleet until they are removed from Delta Connection service in late 2011 under Delta's previously announced retirement program. The company said that Mesaba’s newer Saab 340+ aircraft will likely remain in operation after the merger while Colgan’s older Saabs will be spun out. In addition, Pinnacle plans to streamline administrative and support functions, eliminate redundant inventory and streamline the training costs by cross-utilisation of training facilities and simulators. It also said there was potential for increased utilisation of the combined fleets.

Pinnacle vs Colgan and Mesaba fleets 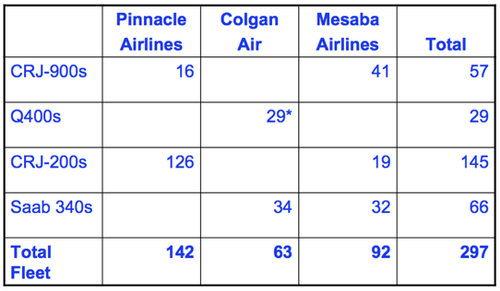 "We have further solidified our future with Delta, which has previously signalled its desire to work with a smaller number of strong regional partners," said Trenary. "We also have additional opportunities to grow with the 'right' product offering – a full spectrum of regional jets and turboprops. As we grow, our emphasis will be on expanding our existing fleets of CRJ-900 and Q400 aircraft, the most cost-effective and fuel-efficient aircraft types within their respective classes – and what our airline partners are demanding."

Both Mesaba and Compass will continue to serve as Delta Connections since the sales deals came with new long-term extendable agreements, ranging from seven to 12 years depending on aircraft type.

Mesaba and Compass will continue to be headquartered in Minneapolis-St Paul with current presidents John Spanjers and Tim Campbell, respectively, leading the airlines under new ownership. Placing the Delta Connection headquarters at MSP was an effort to placate Minnesota authorities worried about the loss of business with Delta’s acquisition of Northwest. But that cannot be a long-term solution for Pinnacle and Trans States because it increases costs. After Pinnacle acquired Colgan, it consolidated personnel at its Memphis headquarters which it will likely do again after Mesaba and Colgan are merged. However, putting the Delta Connection programme in Minneapolis was largely to placate authorities there for moving consolidated management into the Delta headquarters at Atlanta. 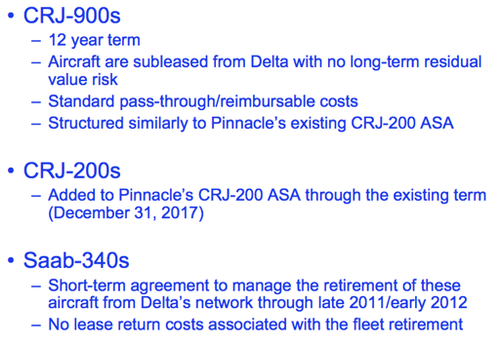 Plans are for Mesaba and Compass to operate as wholly owned subsidiaries of Pinnacle Airlines Corp Inc and Trans States Holdings Inc, respectively. The transactions are not expected to result in any changes in flight schedules or locations served. Compass and Mesaba's combined fleet of nearly 130 aircraft will continue to be dedicated to flying Delta routes.