Delta Air Lines (+4.8%) had the greatest gain at the end of trading, despite traffic results being not quite as impressive as Continental (+4.0%) earlier this week, which was still making gains on Thursday. Delta reported a 0.4 ppt year-on-year increase in load factor for Dec-2009, to 81.2%, as capacity (ASM) reductions, down 8.0%, outweighed the fall in traffic (RPMs), down 7.5%. However, passenger numbers were down 7.5%, to 12.5 million.

Republic down despite improved load factor

In an analyst note, Jesup Lamont is lowering US Airways' (+3.0%) expected fourth quarter loss to USD0.52 per share compared to a USD1.93 loss last year and a consensus estimate of USD0.76. The move came after the airline reported its Dec-2009 stats with traffic declining faster than capacity: -2.4% vs -3.6%, respectively. It also reported unit revenue declined 1% for the month.

US largest airlines set a single-month record in Nov-2009 for on-time performance for the nearly 15 years the Department of Transportation (DOT) has collected comparable data. They also set a record for the lowest rate of mishandled baggage in a single month since these data were first collected in Sep-1987.

According to information filed with the Bureau of Transportation Statistics (BTS), the 19 carriers reporting on-time performance recorded an overall on-time arrival rate of 88.6% in Nov-2009, higher than both Nov-2008’s 83.3% and Oct-2009’s 77.3%.  Since comparable data were first collected in Jan-1995, the previous high on-time mark for reporting carriers was 88.0% in Sep-2002. 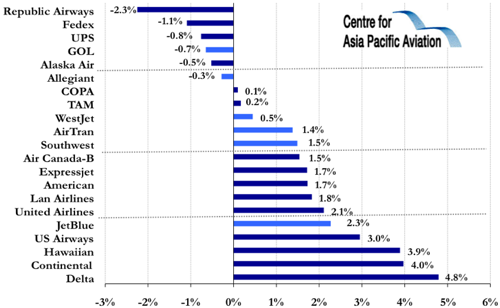