Delta Air Lines was one of the day’s biggest falls. According to SmarTrend, the carrier’s stock has been slowly declining over the past 10 sessions and is currently in a technical downtrend. Over the past 52 weeks, Delta’s stock price has ranged from a low of USD6.57 to a high of USD14.94. The carrier ended the day at USD10.78.

Continental expects merger to be approved in 4Q2010

Continental Airlines (-3.4%) announced it expects its merger with United Airlines (-4.0%) to receive regulatory and stockholder approval in 4Q2010, while the carrier expects to receive a single operating certificate from the Federal Aviation Administration at least a year after the legal merger.

US airline passenger revenue up 20%

The declines in airline stocks were despite the Air Transport Association of America (ATA) announcing during trading that passenger revenue rose 20% year-on-year in Jul-2010, the seventh consecutive month of growth. International passenger revenue rose 36%, led by a 52% surge in trans-Pacific markets. According to the industry trade organisation, passenger numbers on US airlines fell 1% during the month. Meanwhile, cargo traffic rose 19% in Jun-2010. 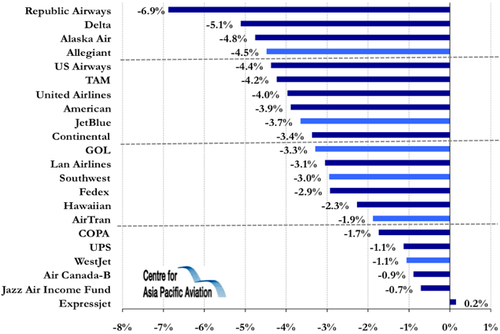