A proposal by Qantas and Japan Airlines (JAL) for extensive cooperation on services between Australasia and Japan would expand the number of codeshare routes they offer and allow faster resumption of international flights in this market, but regulators will weigh that against the increasingly dominant position it would give the pair.

The airlines have asked the governments involved to allow a metal-neutral joint venture on routes between Japan and Australia. This would be a very significant step, as it would potentially give the Qantas and JAL groups a nearly 70% share of passengers in what was a fast-growing international market. They also propose dramatically increasing their codesharing on domestic services and flights from Australia to New Zealand.

Qantas and JAL are looking to launch the arrangement in mid 2021, when they estimate international services will start to re-emerge.

The partnership proposal is a prime example of how airlines will look to strengthen cooperation as they rebuild their international networks following COVID-19. Japanese majors were already ramping up these efforts before the pandemic, as they have increasingly sought new partnerships to extend their reach in recent years.

Such moves have allowed these airlines to maximize their networks while keeping fleet growth in check. This has become more important because JAL now plans to shrink its international widebody fleet over the next few years. Qantas will also have fewer widebody aircraft to reinstate its long haul network, as it plans to keep its A380 fleet grounded for three years.

Japan was an increasingly important market for Australia pre-COVID-19

The Japan-Australia market had developed into an important flow before the pandemic decimated all international routes. The chart below shows that Japan was ninth on the list of Australia’s international markets in Dec-2019, in terms of seat capacity.

Those countries above Japan on the list were mostly either major hubs for connecting traffic, or short haul high-traffic destinations.

So Japan is obviously a significant long haul market for Australia, particularly given that it is not as advantageously placed for connecting traffic. Also noteworthy is the fact that Japan was the fastest growing (year-on-year) among the top 10 Australian international markets in Dec-2019.

Australia’s top 10 international markets as of 2-Dec-19, by seat capacity

In comparison, Australia ranked as Japan’s 11th largest international flow in Dec-2019, according to data from CAPA and OAG. The 23% year-on-year growth rate was slightly behind Japan-Thailand (23.6%), while China-Japan had the highest growth at 41%.

The following chart shows how the airlines were serving the Japan-Australia market before COVID-19. Qantas was dominant, particularly when combined with its subsidiary Jetstar.

All Nippon Airways overtook JAL marginally in mid 2019 when it added a second weekly service. As always, the notable feature of this chart is the sharp drop in March and April as the pandemic closed the borders. Now only the two Japanese airlines serve this market.

Two-way capacity between Australia and Japan, as measured in weekly seats

The next chart highlights the market share in the Australia-Japan direct market a year ago in 2020, versus the week of 4-Jan-2021.

The Qantas/Jetstar share was 72.7%, with All Nippon Airways on 14.3% and JAL 13%. Now, ANA and JAL are the only players in this market, with ANA holding the largest share of two-way weekly seats. Both are obviously down significantly compared with last year.

Strong route structure all but dissolved due to COVID-19

Before the pandemic, Qantas was flying to Tokyo daily from Sydney, Melbourne and Brisbane, along with four weekly services on the Sydney-Osaka route, and a seasonal Sydney-Sapporo flight.

JAL flew from Tokyo to both Sydney and Melbourne daily. ANA had two daily flights, one between Tokyo and Sydney, and a Perth-Tokyo service that began in Sep-2019. ANA had also planned to launch a second flight on the Sydney route last year, but that was derailed by the pandemic.

For the week of 4-Jan-2020, all of the Qantas Group’s flights to Japan remain suspended. JAL is only operating three weekly return passenger flights between Tokyo and Sydney, and ANA is operating five weekly returns to Australia.

Air New Zealand is the only airline that offered direct passenger flights between New Zealand and Japan before the pandemic, codesharing with ANA. ANA and JAL both rely on their partners for access to New Zealand, via Australia in the case of JAL-Qantas.

In their Dec-2020 regulatory filing with the Australian Competition and Consumer Commission (ACCC), the applicants state that the Qantas Group accounted for a combined 58% of passengers travelling between Japan and Australia in full-year 2019. JAL was next on the list with 10%, and ANA had 8%.

The application also stresses that indirect operators have a significant presence in this market, including Singapore Airlines with a 7% share of passengers, and Cathay Pacific with 6%. This means the Australia-Japan market is “highly competitive” in terms of services and prices, according to the applicants.

Virgin Australia has backed out, but may re-enter later

Another player was set to emerge in the Australia-Japan market, and may even still do so in the future.

Virgin Australia had won a coveted slot at Tokyo Haneda Airport, and was due to launch a Brisbane-Tokyo route in Mar-2020 in partnership with ANA. However, the pandemic and Virgin Australia’s subsequent restructuring put paid to this plan.

Virgin has phased out its entire widebody fleet of Airbus A330s and Boeing 777s as part of its restructuring, meaning that it has no aircraft in its fleet or on order that could serve Tokyo.

CEO Jayne Hrdlicka has, however, said on CAPA Live that it eventually intends to return to long haul flying. It has asked Australia’s International Air Services Commission (IASC) to extend the deadline for using the Haneda slot, and the IASC has so far granted two extensions. Virgin will likely keep its options open for Tokyo service as long as it can.

There is also the possibility that another LCC (after Jetstar) will launch services in the Japan-Australia market. ANA plans to establish a medium haul LCC around 2022 using Boeing 787s, and has said that Australasian routes will be one of its aims.

The partnership will cover all direct routes between the countries

Qantas and JAL have filed their applications with the relevant competition regulators for their proposed joint business agreement (JBA). 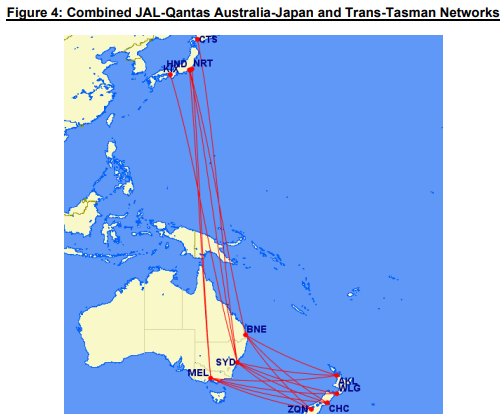 Qantas and JAL have said that they intend to launch the JBA in Jul-2021, assuming that they gain necessary approvals. The ACCC has laid out a tentative decision timetable that aims for a draft ruling in March, and a final determination in May.

The application is for a five-year period, and the two airlines have also asked for an interim authorization to allow them to start planning and rebuild demand as quickly as possible when border restrictions ease. Equivalent applications have also been made to Japan’s Ministry of Land, Infrastructure, Transport and Tourism (MLIT), and the New Zealand Ministry of Transport. 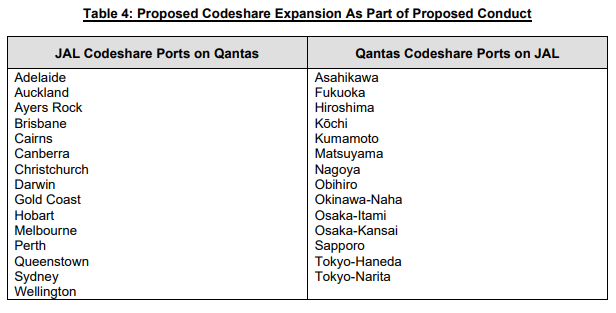 The JBA represents a major expansion of the pair’s current relationship.

Before the COVID-19 crisis, Qantas and JAL codeshared on a handful of non-overlapping routes. These included flights by each airline from their home countries to Singapore, and the Qantas route from Sydney to Auckland. It also covered routes operated by the Qantas subsidiary Jetstar, from Cairns and Gold Coast in Australia to Japan.

In the ACCC application the airlines have said that they have a “limited arms-length” code share agreement at the moment. Aside from the two Jetstar routes, none of the airlines’ direct flights between Australia and Japan are covered.

Approval would spur faster return of services – and a new route

The airlines stress that the JBA would allow them to resume their Japan-Australia direct routes faster than under their current relationship. The partners said they intend to launch a new route between Australia and Japan if their proposal is approved – although they have not revealed which cities it would connect.

In the longer term, further destinations are likely to be added to the codeshare, the airlines said. The agreement will also make it more likely that frequencies will be increased and larger aircraft used on routes.

Route reinstatement would be slower and narrower absent partnership

Without the new arrangement, resuming flights between Australia and Japan “will carry higher degrees of risk” from a financial perspective. This would be particularly true for flights other than those in the core Sydney-Tokyo market.

Qantas and JAL would likely “focus heavily” on the Sydney-Tokyo routes if the JBA is denied and they have to continue to operate independently, according to the airlines’ application. This would delay the reinstatement of the other Australia-Japan routes after the pandemic.

“Absent the proposed [JBA], there would be a concentration of reinstated services on the Sydney-Tokyo route, rather than a spread of operations across multiple city pairs”, the application said. “In addition, there will be no prospect of the applicants serving new city pairs.”

The JBA proposal is a good example of how airlines are looking for ways to rebuild their international networks while also remaining cautious about returning their own metal into service. Combining their services reduces the risk, and Qantas and JAL argue that such a partnership will allow them to reinstate some routes – particularly secondary ones – sooner than otherwise.

This is no doubt correct. However, regulators will also be looking to balance long term competitive issues with their decision. A joint venture of this nature that would significantly boost dominance in a major market would have faced a much tougher regulatory hurdle in a pre-COVID world, but governments are now likely to be more sympathetic to the plight of airlines.

So it would be fair to say that there is a touch of opportunism by the two airlines – or at least a greater expectation of success in the current environment. But seizing any kind of boost they can is exactly what airlines must do to recover in international markets.

The big question now is how the regulators – particularly in Australia – will regard the application. Their response should give a signal about whether governments may view such partnerships more favourably as they look to achieve the goals of supporting their airlines and encouraging the re-establishment of international links, while still maintaining a fair playing field.

Juggling the interests involved will be even tougher than usual for the ACCC and the other agencies. But regulators must realise – and it appears likely they will – that their usual framework for assessing the benefits of mergers and alliances has to change, and that such moves are now more necessary than ever.