Shares in China’s airlines gained yesterday, as the yuan strengthened to a 17-year high on speculation the Chinese Government would yield to increased political pressure from the US regarding the nations’ currency policy.

In Hong Kong trading, shares in Air China, China Eastern and China Southern gained 0.2%, 1.4% and 1.5%, respectively, while in Shanghai trading, shares in Air China rallied 2.9% to reach their highest close since 09-Aug-2010, with China Eastern and China Southern gaining 2.8% and 5.6%, respectively. The strengthening of the yuan eases US dollar-denominated fuel costs and overseas debts gathered from the acquisition of Boeing and Airbus aircraft.

Shares in Thai Airways jumped 5.1% yesterday, as the carrier stated its share offer had been fully subscribed. The carrier was offering 483.9 million new shares at THB31.00 each, to raise USD488 million. The portion of shares for retail investors was twice oversubscribed, while “most” existing shareholders used their rights. A final result of the offering is to be announced on 22-Sep-2010. The new shares are to commence trading on 28-Sep-2010, two days earlier than previously planned.

Also gaining yesterday was AirAsia, with shares increasing 2.0%. CEO Tony Fernandes stated the carrier is “seeing tremendous growth” and is “experiencing a very good third quarter” as travel demand recovers from the global financial downturn. The group expects to handle 30 million passengers in 2010 as it expands its fleet to 100 aircraft by year-end. Mr Fernandes added that the carrier would discuss whether it will pay dividends when its Board of Directors meets at the end of this year. 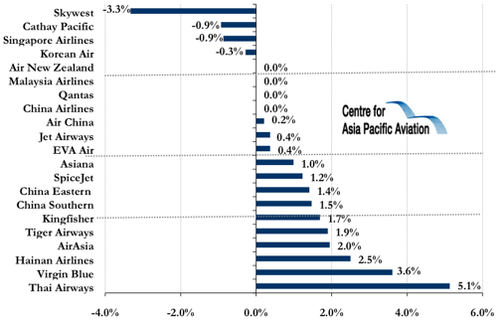 Source: Centre for Asia Pacific Aviation, Reuters & Financial Times
*It was a public holiday in Japan on 20-Sep-2010