Chinese airlines report decline in cargo volumes in May-2011

The spectacular rebound in China’s airfreight demand of 2009 and 2010 has slowed notably in 2011. Chinese mainland airlines reported year-on-year declines in cargo volumes in May-2011, marking the second month of year-on-year reductions so far this year. The two reductions in 2011 follow a period of continuous cargo growth that commenced in Jun-2009, as the country’s manufacturing sector recovered at a cracking pace after the global financial downturn.

However, CAAC still anticipates cargo to increase at a double-digit pace over the next five years, despite the current weakness. According to CAAC’s recently published 12th Five Year Plan (2011-15), cargo volume is expected to increase by 10% p/a from 5.6 million tonnes in 2010 to 9.0 million tonnes in 2015. Passenger traffic is projected to grow during this period at an average of 11% to reach 450 million passengers in 2015, up from 268 million in 2010. Passenger load factors are expected to be greater than 70% in 2015. Load factors averaged 71.6% in 2010. 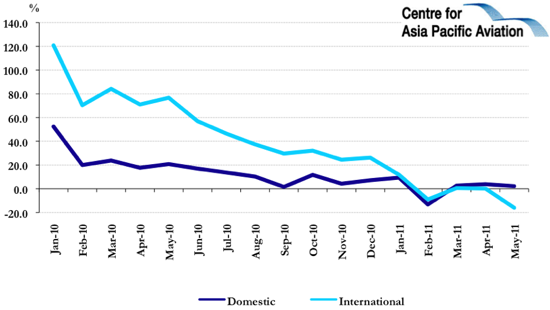 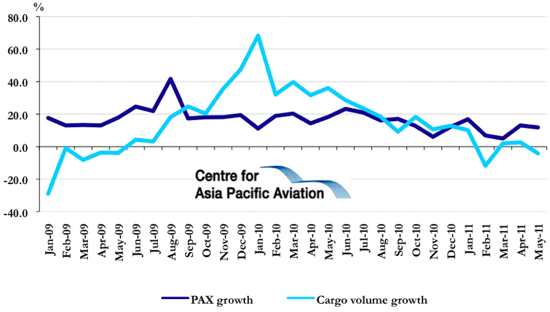 CAAC reported the following traffic highlights in May-2011:

The Japanese earthquake and tsunami disaster continued to have a negative impact on trade between China and Japan in May-2011 with cargo volume on the route weakening 17.3% year-on-year in the month. Cargo volumes between China and South Korea slumped 44.3%.

In May-2011, domestic passenger, representing 93% of the total, increased 12.6% to 22.5 million. International traffic growth was weaker, strengthening 1.3% to 1.6 million. Regional (Hong Kong, Macau and Taiwan) traffic increased 18.7%. Load factors averaged 81.3% marking a 4.3 ppt improvement. Passenger traffic on the China-Japan sector fell 28% year-on-year and was down 1.0% when compared with Apr-2011 results. 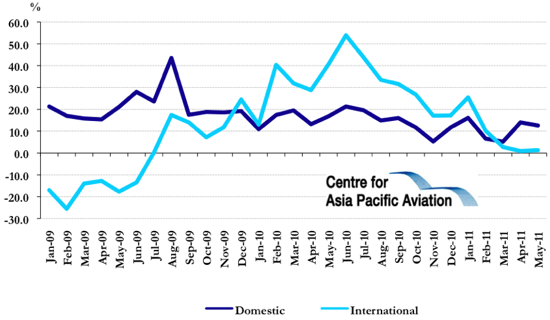 Cathay Pacific also reported weakness in freight markets in May-2011. "In May, the market remained quiet and well below the strong May 2010 result when restocking of inventories remained in full swing," said James Woodrow, general manager of Cathay Pacific Cargo Sales & Marketing said. "Europe was particularly weak and Cathay Pacific reduced Europe capacity to better match the lower demand," he added.

In the Jun-2011 issue of staff magazine, CX World, Mr Woodrow said the sluggishness that appeared in the cargo market in Apr-2011 and continued in May-2011 "look set to run through into summer". He added that despite both tonnage and revenue showing a year-on-year decline, "there's no sign of any structural change in demand". The carrier also noted that in addition to a drop in exports out of Hong Kong, it has seen a "significant softening in exports from China and in particular from Shanghai". However, imports have been "holding up well, with some adjustment in the usual directional imbalance, and demand on intra-Asia routes has also been strong". The carrier also stated it has been making ad hoc cancellations in line with demand.

Mr Woodrow concluded: "Comparisons with last year are skewed because 2010 really was exceptional, with consistently strong demand as the economy bounced back from recession. We have to remember that the period April through June is traditionally a slacker period, so in some sense what we are seeking now is a return to normal market conditions."

Similarly, AAPA noted a 2.4% decline in international air cargo traffic at Asian airlines in May-2011, reflecting some moderation of global economic growth, affecting Asian exports, especially when compared to the very strong rebound in demand witnessed in 2010. AAPA, however, anticipates a pickup in volume in the traditionally stronger second half.

IATA in its 12011 Cargo E-Chartbook, also noted a deterioration in the market environment, stating shocks have hit the demand side in Japan and MENA and the cost side with a further surge of fuel prices. The dramatic expansion in airfreight volumes seen in 2009 and early 2010, ground to a halt in 2Q2010, with a downward trend since.  Freight levels, however, remain above pre-recession levels. 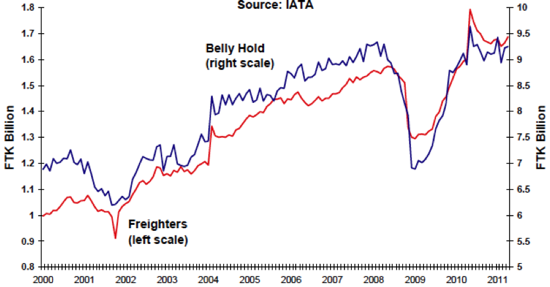 IATA forecast that cargo markets and cargo profitability will be squeezed further but should be able to stay in profit this year. Profit margins have been coming under downward pressure since 3Q2010.