China’s aviation boom continues, with China Eastern Airlines reporting a remarkable 50% increase in Dec-2010, according to preliminary figures. The carrier reported an average load factor of 76.8%, 6.2ppts higher than the same month in 2009.

China Eastern Airlines' shares were down 1% on Friday, with most other mainland Chinese carriers also trading down. Hainan Airlines shares lost 3.5% - despite the announcement that the carrier has become the first mainland carrier to earn five-star certification from SkyTrax. China Southern Airlines' shares were down 2.3%. Shandong Airlines shares eased 0.4%, while Air China was up 0.1%.

Elsewhere in Asia, shares in India’s listed carriers were lower, with Kingfisher Airlines dropping 5.2%, Jet Airways down 4% and shares in SpiceJet lower by 2%. Kingfisher Airlines, now the second-largest carrier in India, reportedly faces risks of higher insurance premiums, following a decision by the Indian Directorate General of Civil Aviation (DGCA) to reclassify the Nov-2009 failed landing of an ATR turboprop in Mumbai from an "incident" to an "accident". Kingfisher's aircraft insurance premiums could increase by 5-10%, according to a report in Live Mint. 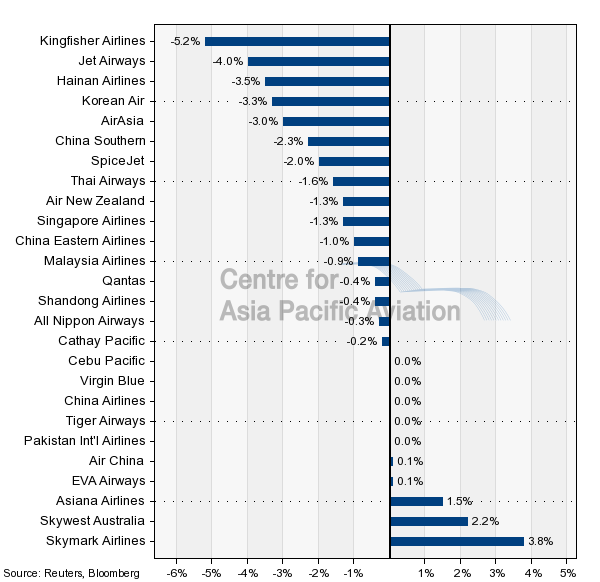