In 2017, India received 10.2 million foreign visitors, of which around 2 million were land border crossings from Bangladesh. A striking feature of the remaining 8 million foreign arrivals is the relatively small share of visitors from North Asia who represent a key driver of tourism in other Asian destinations.

The three largest markets in the region – China, Japan and South Korea – accounted for only around 7.5% of foreign arrivals (excluding Bangladesh) in India, compared with more than 35% in the case of Thailand.

Destination India is an under-performer in North Asian source markets

In 2016, India received a total of 571,000 Chinese, Japanese and Korean visitors. Thailand, by contrast, welcomed more than 11 million tourists from these source markets.

Tourist arrivals in India and Thailand from North Asia (2016)

Some of this can be explained by geo-politics (given occasional tensions in the India-China relationship) and Thailand’s closer proximity to North Asia. But India’s under-performance is highlighted by the fact that in 2016 it received fewer Chinese tourists than either Sri Lanka or the Maldives, which have a much more limited tourism product and are slightly more distant than India. 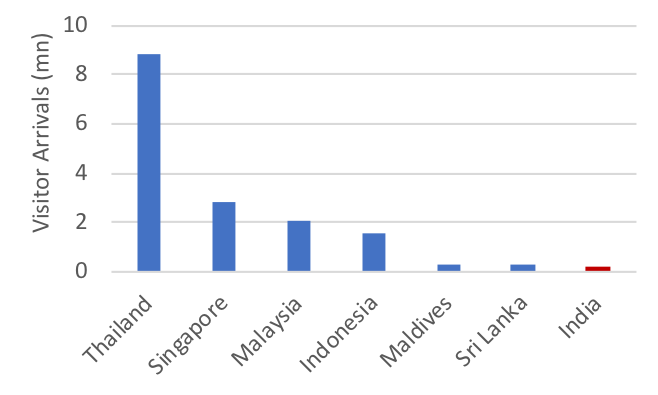 Perhaps the most likely reason is that India has to date not actively courted inbound tourism from China. But that may be changing, with the Indian Minister of Tourism leading a delegation to China in w/b 3-Sep-2018 to promote the destination.

The average CAGR for inbound tourists from non-Chinese markets to competing destinations was considerably lower at 7.3%, underlining the role of Chinese tourists in boosting inbound tourism in these countries.

Most of India’s competitors gained significantly from the growth in inbound Chinese tourists. As seen in the above table, on an average, China contributed 1.8 ppts to the total inbound growth rate of India’s competitors during 2007–2016. Thailand, with an 2.9 ppts contribution to its inbound growth rate, experienced the greatest impact of Chinese tourists, followed by Indonesia (2.5 ppts) and Maldives (2.1 ppts).

If inbound tourism from China to India had grown at the average CAGR of its competing destinations over the last decade i.e. 25.1%, India would have received around 800,000 Chinese tourists in 2017, rather than 249,000.

Limited air connectivity has been a constraint on tourism flows

Direct air services between India and North Asia are notably under-developed relative to the size of the economies. India and China, with more than one-third of the world’s population between them, have just over five daily non-stop services in each direction. The frequencies to Japan and South Korea are even fewer.

Weekly frequencies in each direction between India and North Asia

Indian airlines have barely touched North Asia, with just nine weekly non-stop frequencies - all operated by Air India - to Shanghai (5 frequencies) and Tokyo (4 frequencies). There are a further three one-stop services to Osaka and four to Incheon, all via Hong Kong. Re-engined narrow body equipment has the potential to open up routes between India and China. However, Japan and Korea could only be served with wide body aircraft.

With Indian carriers, particularly LCCs, expected to expand their international footprints over the next 12-18 months, North Asian destinations are likely to be under consideration, and this could provide a stimulus to growth.

China has sought a liberalisation of the bilateral air services agreement with India as its carriers are close to exhausting their entitlement of 42 weekly frequencies.

However, given the low level of utlilisation by Indian airlines, India is unlikely to agree to an increase in frequencies in the near term, especially as a sizeable proportion of capacity on these services is being sold for onward carriage to North America.

Visa requirements can be a major obstacle to travel given the costs, time and hassle that can be involved. This is especially true in the case of leisure travel, where travellers have alternative destinations they can visit.
All foreign nationals, except citizens of Nepal, Bhutan and the Maldives, require a visa to visit India. India’s visa application process was notoriously cumbersome until late 2014, when the government introduced an electronic visa scheme.

Nationals of 165 countries are now eligible for this option for leisure, VFR, business, conference or medical purposes, which means that the vast majority of visitors can access this facility. Japanese and Korean citizens have been able to apply for e-visas since the scheme was launched, with Chinese nationals being added the following year.

Japan is also the only country in the world whose nationals are eligible to receive a visa on arrival in India, without prior application. South Korea will become the second country with this privilege, effective Oct-2018.

A clear opportunity for Indian tourism

North Asia represents a clear opportunity for India to target for inbound tourism. The size, growth rate and propensity to spend of outbound travellers from the region, particularly China, can no longer be ignored. Amongst its diverse attractions, an aspect of the Indian tourism offer that could potentially resonate particularly strongly in North Asia is the ‘Buddhist circuit’ in the east of the country, covering historical and religious sites of significance from the life of Buddha.

It will take a concerted effort and investment by the government and private sector operators in terms of marketing and promotion, as well as tailored product development. And air connectivity will need to be enhanced significantly.

But if successful, the resulting contribution to economic growth and job creation in India would be transformative.