LAN Airlines (-1.8%) was one of only two North and South American carriers to experience a decline in stocks on Monday (01-Mar-2010), after it was forced to cancel 17 flights to/from Santiago over the weekend as a result of Chile’s 8.8 magnitude earthquake on 27-Feb-2010. It was a mild fall, suggesting investors feel it is 'business as usual' for LAN.

Normal operations at Santiago from 05-Feb-2010

From 02-Mar-2010, LAN will resume restricted domestic and international flight operations at Santiago International Airport, with only 15% of services to be operating, and the airport is expected to completely reopen on the same day. The airport has already resumed some military and commercial flights, handling approximately 160 flights since 28-Feb-2010, according to Pablo Ortega, the head of the National Aeronautics Administration told Radio Cooperativa. The airport usually handles approximately 300 per day.

LAN is now working with the airport to establish a temporary tent facility at the Santiago terminal for passengers, after the main terminal remained closed for the past couple of days due to damage. Only a few flights have been authorised to land, in order to transport passengers to Chile's capital city of Santiago. Through to 04-Mar-2010, the priority will be the transfer to and from Santiago those passengers who have been affected by flight cancellations. Starting on 05-Mar-2010, operations are expected to return to normal.

As a result, LAN has released a new domestic and international contingency itinerary for 01-Mar-2010 through to 04-Mar-2010. The rest of LAN's operation (domestic flights within Peru, Argentina, Ecuador and international flights not departing from or arriving in Santiago) will continue to operate normally. The carrier is now waiving surcharges on changes of dates of travel until 30-Mar-2010 for passengers who have not been able to fly due to the situation in Chile.

Commentators believe the Chilean Government will now tap into its USD11.3 billion overseas savings fund for rehabilitation efforts, including repair works to Santiago International Airport. The airport’s passenger terminal and fuel system were severely damaged as a result of the earthquake, while its runways remain intact and flight systems were not affected.

Chile’s IPSA Index (-1.2%) recovered some ground on Monday, after earlier falling as much as 2.9% earlier in the day. However, the fall was still its largest since 05-Feb-2010. Chile’s share market is the third largest in South America, following Brazil and Mexico.

The Chilean Peso meanwhile actually rose against the US Dollar for part of the day, but ended trading down 0.5%. Central Bank President, Jose de Gregorio, stated there would be a delay in raising interest rates “for a while”.

Meanwhile, in the US, airline shares gained with the wider market on Monday, after more encouraging US data showing consumer spending increased faster than expected in Jan-2010. The country’s manufacturing sector also grew during the period. Both the Dow (+0.8%) and the AMEX Airline Index (+2.3%) ended trading higher. 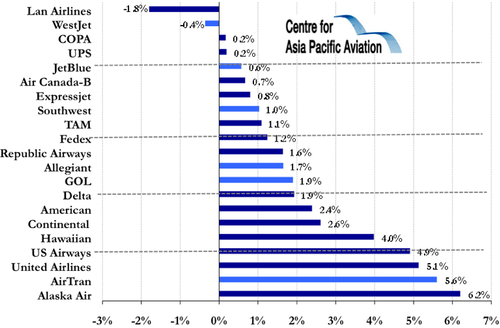