Cathay Pacific CEO, Tony Tyler, in a speech to the Asian Aerospace Congress, described the current economic environment as the "most destructive economic downturn in recent memory", adding “the worst thing of all is there is still no end in sight".

Mr Tyler stated the carrier is “suffering a toxic combination of a collapse in our front end and cargo revenues, extremely weak yields in our Economy cabins and still volatile fuel prices”, with the carrier further affected by the swine flu outbreak and cross-Strait services.  Also concerning is that Mr Tyler quested whether the current trends of lower premium demand and lower yields is structural or just cyclical, and whether this trend will become the 'new normal'".

Mr Tyler added, “we keep waiting for signs of the green shoots of recovery. We’re in Asia so I’ll use an appropriate analogy.  When we look at the rice-paddy we see only one or two green shoots rising out of the watery mud. Certainly not enough to fill a rice bowl! The very best we can say is that things have stopped getting worse, but a real and sustained business upswing still seems like a distant dream".

Cathay Pacific shares were down 1.0% yesterday.

Jet Airways' shares dropped the most in three months in Mumbai intra-day trading, falling by as much as 13%, after the carrier stated it would be forced to cancel approximately a third of its daily services on 08-Sep-2009, due to an alleged “simulated strike” by nearly 40% of the carrier’s pilots.

The carrier’s share price has gained 23% in 2009, compared to the benchmark Sensex Index’s 67% gain, and was up 2.6% at the close of trading yesterday.

186 Jet Airways services, both domestic and international services were cancelled, affecting approximately 13,000 passengers, with Chairman, Naresh Goyal, stating he would “not hesitate to close down the airline”, if the “philosophy” of Jet Airways’ employees does not improve.

The airline, which reported its worst loss in at least a decade in 2008, stated it is in a “conciliation process” with the pilots, which the airline believes is sabotaging the carrier’s operation to “damage the airline’s operations.”

Qantas Group shares were up 0.8% yesterday. The carrier confirmed it is currently reviewing its 46% stake in Air Pacific and is in talks with the Fijian Government over the possibility of selling its stake. The planned sale comes as the Group plans to launch Jetstar services to Fiji and focus on its core business amid the global financial downturn. 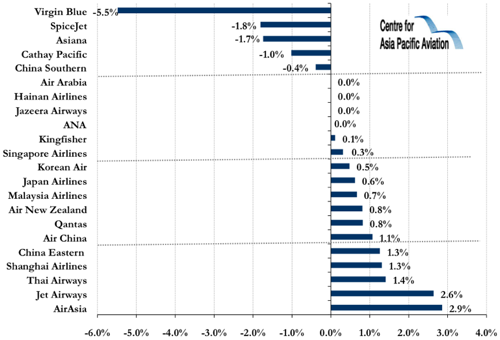