The smaller Saudi Arabia-Philippines market has grown by over 60%. The result has been over-capacity with no winners as the market is intensely price-driven by contractors seeking seats for Filipino migrant workers. Cathay's reductions, while small, are likely only the start of needed consolidation between the Philippines and Middle East.

Cathay is particularly at the losing end as its once-tidy Philippines-Middle East market has come under Gulf and LCC competition that can offer lower fares and more direct services. Some Philippines-Middle East markets require two stops due to triangular routings, which are being discontinued. Also discontinued are services to Jeddah and Abu Dhabi. Air Seychelles, 40% owned by Etihad, introduced Abu Dhabi-Hong Kong services in 2013.

While Cathay may not experience such fierce and sudden competition changes elsewhere in its market, it is an unwelcome example of what such vibrant market conditions including more Gulf, LCC and non-stop competition can do to its network, which has partially relied on traffic other carriers could not or did not bother to carry. While that has been a smart network foundation, it is also a shifting one, as European carriers and even Singapore Airlines have found.

Cathay at the start of 2013 was the second-largest Asian carrier between Asia and the Middle East. The largest was Garuda Indonesia, whose traffic varied considerably by season as it was mainly targeted towards the religious market of Jeddah. At the start of 2014 Cathay became the third-largest Asian carrier after Philippine Airlines during 2013 built up a sizeable Middle East network. Singapore Airlines is a smaller player to the Middle East and carries far fewer passengers from the Philippines compared to Cathay.

For example, market data for Mar-2013 shows that the largest market between the Philippines and the Middle East was between Manila and Dubai, of which Cathay captured about 20% while SIA captured only about 5%. The Manila-Dubai market comprised about one-fifth of all Philippines-Middle East passengers. The second-largest route was from Manila to Riyadh, which SIA does not serve.

The entrance of Cebu Pacific, PAL Express and Philippine Airlines in 2013 have flooded the market with capacity, adding to the capacity influx by Emirates. 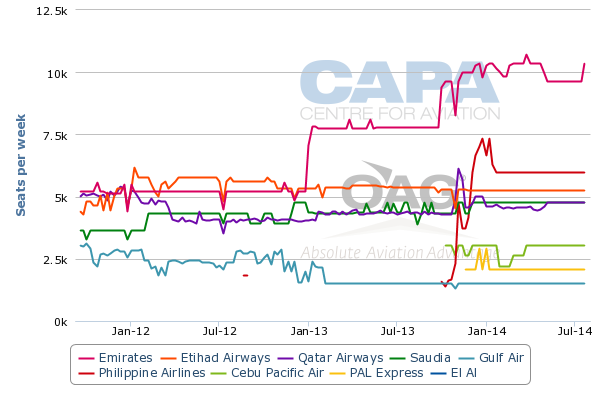 As CAPA previously wrote about PAL's expansion to the Middle East: The resumption of services by the PAL Group to Middle East – including the UAE, Saudi Arabia and Qatar – is part of an ambitious expansion plan by new PAL owner San Miguel. PAL had little choice but to go ahead with several new Middle East routes given its commitment to rapidly increase the size of its A330 fleet. Unfortunately for Cebu Pacific, the expansion at PAL coincided with the LCC expanding into the long-haul sector with the Middle East its main target… the launch of flights from both Cebu Pacific and PAL could quickly turn a market that had been underserved into an overcapacity situation.

Cathay Pacific will decrease its Middle East network by 10-20%

Cathay in mid-Jan-2014 warned it was facing intense competition and over-capacity to the Middle East, and in late-Jan-2014 announced a restructure that sees services to Abu Dhabi and Jeddah ended. Cathay cited unspecified "commercial reasons" in ending services. Riyadh moves to a non-stop schedule while Bahrain is served as a tag from Dubai (replacing Jeddah) instead of being in a triangular routing. Cathay will end all triangular routings.

The outcome is that weekly flights from Hong Kong to the Middle East will decrease from 21 to 19, or about a 10% reduction. A larger drop – and potential cost saving – is from the decrease of flight segments to, from and within the Middle East. Those segments will decrease about 17% from 63 a week to 52.

Cathay has provided few details about the changing conditions in the Middle East. There is little discernible difference in its load factor for the wider region of India, Middle East, Pakistan and Sri Lanka.

Any weaker loads to the Middle East could be offset by higher loads to other regions in this grouping. Yield information is not released. 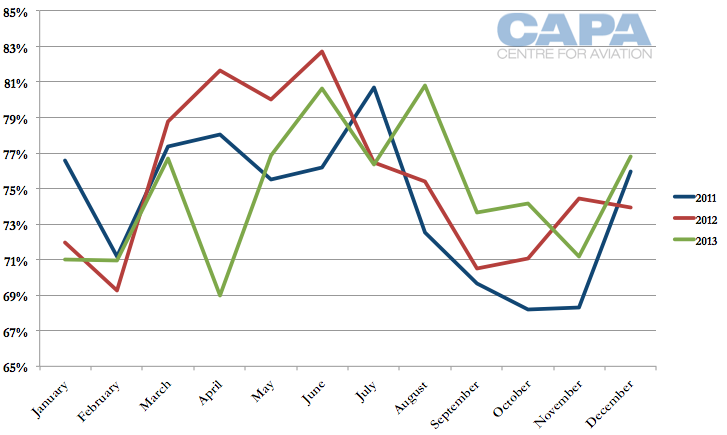 The network changes see the removal of services to Abu Dhabi. Cathay had served Abu Dhabi three times weekly via Riyadh. More than half of the passengers on Cathay services passing through Abu Dhabi were bound for Riyadh, according to limited market data. That diminishes the importance of the Abu Dhabi withdrawal.

While not ideal, Dubai can be an alternative to Abu Dhabi as the two are only about 150km apart. Cathay is maintaining double daily services to Dubai. Local ground transport from Dubai to Abu Dhabi destinations is practical in this market given the service's high reliance on Filipino migrant workers, whose transport is typically arranged by contractors, which can group passengers for ground transport. Just under half of passengers were connecting from the Philippines. Connecting passengers from the Philippines alone far outweighed the amount of local traffic.

Air Seychelles has expressed interest in cooperating with Cathay - an interesting potential extension of the relationship, given the Etihad-Seychelles link. This could give Cathay offline access to Abu Dhabi. Air Seychelles and Cathay currently cooperate only on itineraries to/from Mahe. Alternatively Cathay could be planning for its Hong Kong-Dubai flights to absorb Abu Dhabi traffic. The connecting Dubai-Jeddah service will be switched to Dubai-Bahrain. Bahrain is a smaller market but is less competitive.

From May-2014 to Jul-2014, the Bahrain service will be re-routed through Abu Dhabi on the outbound leg only due to runway works at Dubai.

Jeddah is a smaller market than Riyadh, which becomes non-stop

Cathay is ending services to Jeddah while retaining Riyadh. Riyadh is a more robust market overall. Jeddah has lower migrant traffic than Riyadh while Riyadh has more diverse inbound traffic feed, with Cathay taking passengers from China, Japan and even Australia to Riyadh, the capital and largest city in Saudi Arabia. Jeddah is the gateway for Hajj/Umrah religious trips, and sees less business traffic.

Riyadh will move from a daily service on a triangular routing to a non-stop served five times a week. The reduced frequency is a trade-off for the non-stop offering via Hong Kong. Philippine Airlines and Saudia have non-stop flights between Manila and Riyadh that can be priced lower than one-stop alternatives. For Cathay to compete with a two-stop product (transiting in Hong Kong and then typically a Gulf destination), prices would have to have been low – unprofitably so. 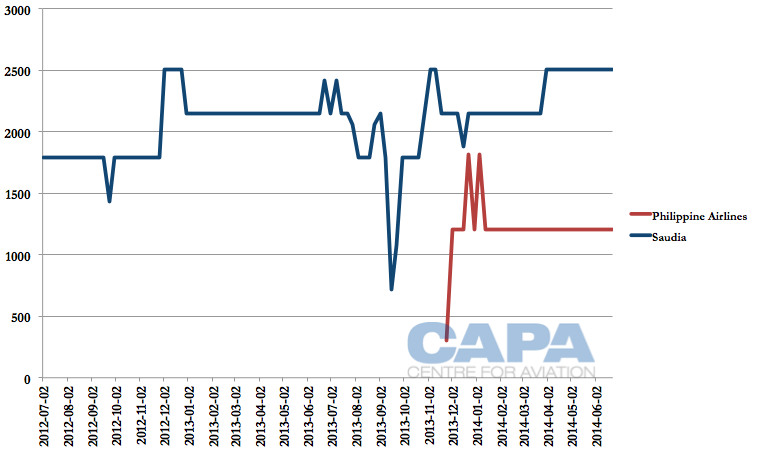 Bahrain is a small market but less competitive

Bahrain is too small a market to serve non-stop, as it has only about 100,000 overseas Filipino workers compared to Saudi Arabia's 1.5 million. Bahrain has advantages as it is less competitive than UAE or Saudi destinations. The sole link between Bahrain and the Philippines is Gulf Air's daily service. Philippine Airlines and PAL Express do not serve Bahrain, and while Cebu Pacific thought of serving Bahrain, Cebu is now against the idea, seeing the Philippines-Bahrain market too small.

Unlike Cebu or Philippine Airlines, Cathay can pull from across its network – mainland China mostly – to feed the Bahrain service. The tag flight from Dubai carries low costs, being 488km from Dubai. Cathay had served Jeddah from Dubai, which at 1,701km was three times the distance. The tag flight also ensures Cathay retains a cargo presence.

After the change Cathay will increase Bahrain services from four weekly to daily. While that is a large increase for a small volume market, the risk is low and should also act as a deterrent should Cebu or Philippine Airlines re-consider Bahrain.

Over-capacity persists in the Middle East-Philippines market, a warning for Cathay as sleepy North Asia wakes up

Cathay will reduce Hong Kong-Middle East non-stop capacity by about 500 seats a week. While this may improve Cathay's position, the larger Middle East-Philippines market continues to suffer from over-capacity. Cathay will gain from its reductions, but benefits to other carriers will only be incremental given how large their exposure is – and growing.

The Middle East-Philippines market is unique. Traffic is imbalanced between inbound and outbound sectors and tickets are bought in bulk and often at the last minute. But some of the underlying factors that have changed the competitive environment can and will occur elsewhere in Cathay's network. In the Philippines Gulf network carriers like Emirates have rapidly increased capacity, LCCs entered and full-service carriers like Saudia and Philippine Airlines have entered or increased capacity, taking back traffic that used to go through a foreign hub.

Premium cabins and loyalty are not drivers in the Middle East-Philippines market, whereas Cathay can use those elsewhere on its network. But ultimately more capacity means more competition, even if the situation in the Middle East was to the extreme. North Asia has been a sleepy market, with carriers not able to serve or uninterested in serving markets, leaving a healthy supply of demand Cathay has smartly exploited.

North Asian carriers are becoming more competitive, from growing long-haul capacity to a focus on new short-haul markets to LCCs and the growth of Chinese carriers. As the Middle East shows, Cathay will still have markets to serve, but there will be adjustments, sometimes substantial, along the way.