The Rolls-Royce Trent 1000 engines that power the 787 are back in the news due to an airworthiness directive requiring more frequent inspections, as well as applying a reduced ETOPS rating.

In Mar-2018 Rolls-Royce and EASA issued a directive requiring operators of Trent 1000 'Package C' engines to carry out maintenance checks on a specific part of the engine compressor earlier than usual. This check was already required prior to the engine reaching a flying threshold of 2,000 cycles. The directive reduces that time frame to 300 cycles. Rolls-Royce issued an advisory that 380 engines globally are impacted by the directive. The more recent Trent 1000 TEN model engines, used on recent 787 deliveries, are not impacted.

The U.S. Federal Aviation Administration (FAA) has reduced ETOPS for impacted aircraft down to as low as 140 minutes, compared to the previous limit of 330 minutes. The concern about reducing ETOPS is that failure of one engine could require the other engine to operate at full thrust, which would increase risk for a second engine failure.

There is no public account of how many faults have been identified. Reuters said on 14-Apr-2018 that Norwegian had already identified one faulty engine and would complete checks before 26-May-2018.

Airlines with the most package C Trents: ANA, LATAM, BA and Virgin Atlantic

The CAPA Fleet Database records 190 787s with package C Trent 1000 power plants. Currently, 189 of the impacted aircraft are in service with airlines. One frame (serial 38484) is not in active service with an airline.

There have been 676 787 deliveries as of 18-Apr-2018, according to the CAPA Fleet Database. Rolls-Royce is the smaller power plant supplier on the 787 programme, accounting for 39% of the 676 deliveries (263), while GE holds the balance. Of the delivered Rolls-Royce 787s, 72% are impacted by the airworthiness directive for package C Trent 1000 power plants.

British Airways has 18 aircraft with package C power plants and Virgin Atlantic has 15, Air China has 14, Avianca 12, Air New Zealand 11 and Air Europa 10. Other operators have less than 10 impacted aircraft. 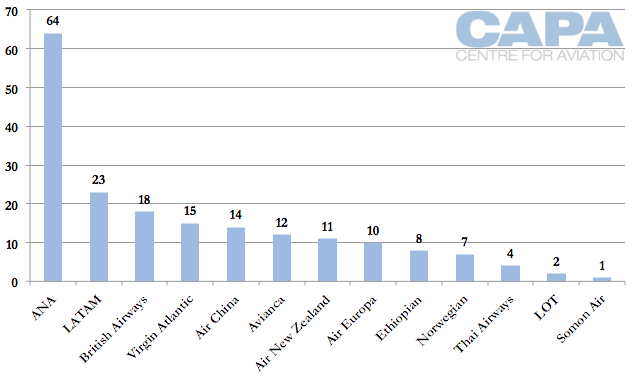 Operational impact is different by airline

It is difficult to assess operational impact from the airworthiness directive for package C Trent 1000s. ANA has multiples of impacted aircraft, compared to other airlines. This equates to substantial lost operating time as well as inspection/repair costs (although presumably airlines will reach agreements with Rolls-Royce).

Yet some airlines can be disproportionately impacted. The ETOPS restriction, for example, has reduced impact on ANA where most of its 787 flights are in the domestic market or to Europe and other parts of Asia where there are plenty of relatively close diversion points nearby. North American 787 services are not significantly impacted. ANA may also have back-up aircraft, or be able to consolidate services owing to its low average domestic load factor (sub-70%). 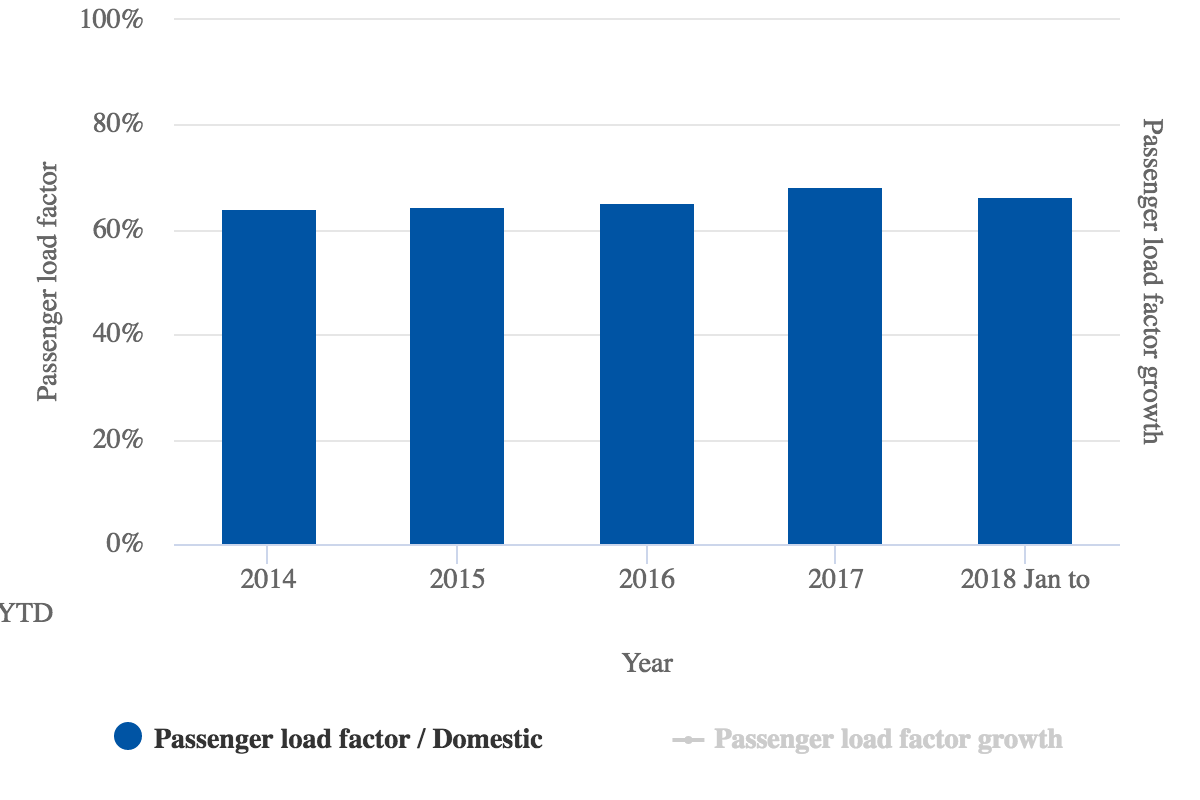 Air New Zealand, owing to its geography, may be more impacted by ETOPS restrictions. Norwegian may have less spare capacity. At Virgin Atlantic, 15 of its 16 787s have package C Trent 1000s, impacting one third of its fleet.

Virgin Atlantic Airways aircraft share, by type: as at 16-Apr-2018 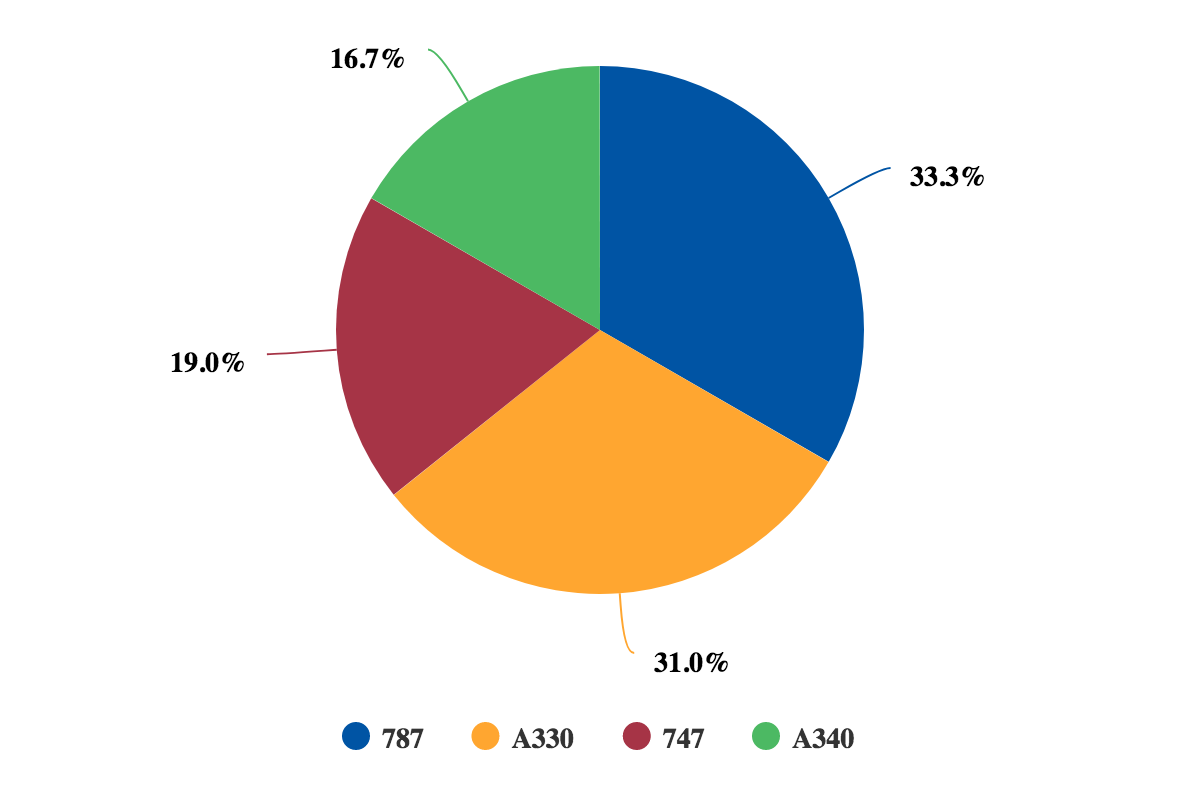 Most airlines are keeping a low profile about 787 inspections, repairs and recovery plans. But some airlines have provided guidance, as below.

Air New Zealand is adjusting its operation to accommodate the required checks. Air New Zealand has had to cancel an unspecified number of flights, and other services have been rescheduled. The airline has estimated that 6,500 passengers are impacted.

Air New Zealand will complete checks on 20-Apr-2018. Based on expected required repair work, the airline will adjust its forthcoming schedule. Air New Zealand apparently expects significant shortfall of capacity as it plans to lease aircraft from Hi-Fly while seeking medium term 777 dry leases, according to Aviation Week. As recently as 16-Apr-2018, Air New Zealand said it did not expect the incident "to materially impact FY18 earnings and previous guidance remains unchanged".

At All Nippon Airways, the operator with the most impacted engines, the airline has reported that 31 of its aircraft will be required to have the shorter ETOPS rating, as well as a lower payload to reduce required engine thrust. A failure of an engine would require the other engine to fly at cruise at full thrust. ANA is working with Japanese regulators on forthcoming plans, particularly regarding services by 787s to North America.

In Feb-2018 LATAM sent one 787-8 (CC-BBD) to storage at Southern California Logistics Airport. There were reports that a second aircraft (CC-BBE) could be stored, but this has not occurred.

Virgin Atlantic has stored two aircraft at London Heathrow, one since Sep-2017 and one since Oct-2017.

Norwegian plans to lease in 777 capacity to cover grounded 787s, according to CH-aviation.

Virgin Atlantic was previously leasing three A330-200s as interim lift. The initial Trent 1000 checks occurred as airberlin was exiting the market, putting aircraft capacity on the market. The three A330s in question with Virgin previously flew with airberlin.