US markets were closed on 26-Nov-2009, for the Thanksgiving National Holiday. However, Canadian and Brazilian markets remained open and will be the focus of this share wrap.

Canada: Canada's international travel deficit widened from CAD3.2 billion in 2Q2009 to a record high of CAD3.3 billion in 3Q2009, according to Statistics Canada, with the main driver being a 0.8% decline in spending by foreign travellers in Canada between 2Q2009 and 3Q2009 to CAD3.7 billion, its lowest level in six years.

Travel spending by foreigners in Canada has fallen by 15.1% since it peaked at CAD4.4 billion in 4Q2004. This downward trend was the result of a drop in spending by American travellers in Canada

At the same time, Canadians spent just over CAD7.0 billion travelling outside the country, a 0.1% increase. Canadian travellers spent CAD3.1 billion in overseas countries, up 4.3% from the previous quarter, which was in part the result of a 2.9% increase in travel to countries other than the US

Canada's travel deficit with overseas countries increased to a record high of CAD1.1 billion in 3Q2009, with an increase in travel spending overseas and a reduction in spending by travellers from overseas countries (down 1.2% to CAD2.0 billion) in Canada being responsible for the higher deficit. 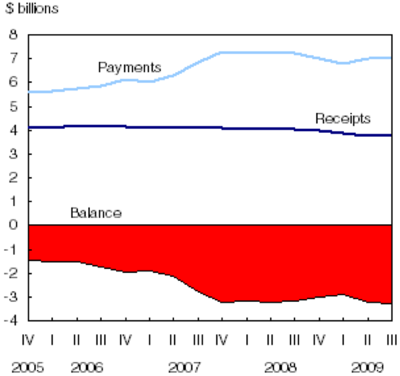 Brazil: GOL, meanwhile, announced the adoption of Travelport's Interline E-ticket Interchange, and the extension of its agreements with the main global distribution systems: Sabre and Amadeus as well as Travelport.

The technology allows the LCC to issue tickets globally, even if the partner airline employs the traditional e-ticket model. GOL currently has five ongoing codeshare agreements (with Air France/KLM, American Airlines, Iberia, Aeromexico and Copa Airlines) and 60 interline agreements, with these strategic partnerships accounting for an increasing share of ticket revenues. 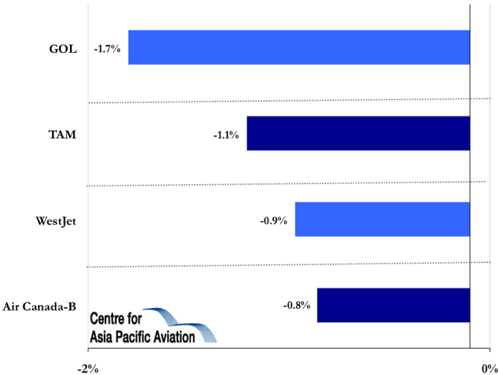