Brussels Airlines: the long wait for consummation with Lufthansa – Part 2

Accounts filed in Jun-2013 with the National Bank of Belgium show that the operating loss of Brussels Airlines’ holding company SN Airholding widened in 2012. It has yet to make an operating profit since Lufthansa acquired 45% in 2009, although its ‘Beyond 2012-2013’ restructuring programme aims to bring the company back to profitability by 2014.

Analysis of its unit costs (CASK) show that Brussels Airlines is a little more efficient than other Lufthansa Group national carriers, but much higher cost than the LCCs with whom it competes on much of its European network, which accounts for well over 80% of its seat capacity. The strength of its Europe to Africa operations risks being eroded by growing competition in the transfer market.

It seems unlikely that Lufthansa will exercise its option to buy the remaining 55%, unless Brussels Airlines can demonstrate significant progress towards sustainable profitability before the option expires in Apr-2014.

No annual reports, but accounts are available from the National Bank of Belgium

SN Airholding has not reported its annual results since it announced a net loss of EUR12.2 million and a small operating profit of EUR1.5 million for 2008, on revenues of EUR985 million. As it is only minority-owned by Lufthansa, the German group also does not reveal any financial data for Brussels Airlines. Lufthansa’s 2012 annual report, published in Mar-2013, says that “Brussels Airlines must still make further efforts before returning to profitability”.

However, accounts for all Belgian companies must be filed with the National Bank of Belgium and the group’s 2012 accounts have recently been issued (Jun-2013). These confirm that SN Airholding has made an operating loss every year since 2009.

Brussels Airlines is 99.99% owned by SN Airholding and is its only fully consolidated subsidiary. The group also contains two companies in which SN Airholding has a stake of just over 50% and which are proportionately consolidated into the group: Airbel, also based in Brussels, and Korongo, which is based in the Democratic Republic of Congo.

In 2012, SN Airholding’s operating loss widened to EUR93 million from EUR87 million in 2011, although exceptional items helped the net loss to narrow to EUR65 million from EUR85 million. (The 2012 operating loss of Brussels Airlines was EUR92 million and the net loss was EUR61 million.) High fuel prices, the strong dollar and weak economic growth all weighed on the results.

At the end of 2012, SN Airholding had a net cash position (i.e. cash and short term investments are greater than financial debt), although this has been on a downward trend. All aircraft are leased, according to the CAPA Fleet Database, so SN Airholding’s adjusted net debt position (treating off-balance sheet leased aircraft as if they were debt funded) would likely be significantly negative.

Accumulated losses have resulted in the holding company’s book equity being negative in 2011 and 2012. Lufthansa has said that it will hold off from further investment in the company until it can restore profitability and the trends of declining cash and negative equity must be a concern to it.

SN Airholding's 2012 accounts give the average number of employees in the fully consolidated group, consisting of those employed by Brussels Airlines and the small number in the holding company itself. Combing this with passenger and freight data of Brussels Airlines, we can analyse it on a number of labour productivity measures. It would rank overall at number 13 out of 20 major European carriers if we included it in our analysis of labour productivity.

It is ahead of most of the big flag carriers, but short of the productivity levels of the LCCs. Moreover, although headcount dropped and productivity (measured by ATK per employee) increased slightly in 2012 versus 2011, other measures deteriorated (see table below). In particular, cost per employee grew by 8.4% to EUR65,000 and employee costs per ATK grew by 7.7%.

Furthermore, revenue per employee fell by 13%. It may be that these figures are temporarily distorted during the restructuring programme, for example if there are one-off employee costs or if further headcount reductions and productivity measures are yet to be fully implemented. Labour costs represented 17.9% of group revenues in 2012, a significant cost item, and are key to cost control.

Brussels' fleet is all leased

Brussels Airlines’ fleet of 44 aircraft is 100% leased, according to the CAPA Fleet Database. It has seen rationalisation of its short/medium-haul fleet in recent years, with a number of AVRO/BAE RJ aircraft replaced by Airbus A319/320 aircraft, equipped with new “light weight” seats from German manufacturer Recaro designed for the Lufthansa Group.

According to the CAPA Fleet Database, the average age of the different sub-fleets varies from around seven years (its five Bombardiers) to 18 years (seven A330s). 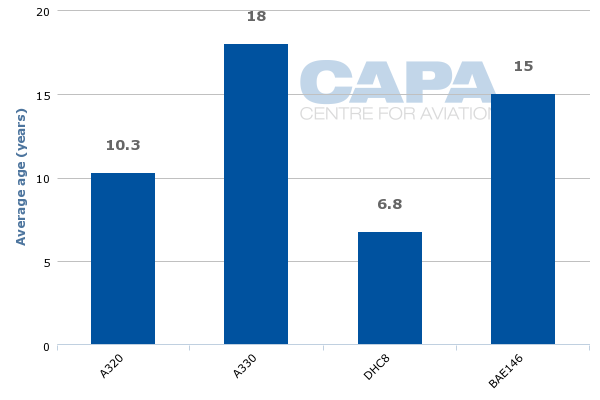 Brussels Airlines invested almost EUR30 million in this upgrade, considerably less than investing in new aircraft, but, according to CEO Bernard Gustin, it was very cost-effective: “A large investment that gives a new dimension to the term 'passenger comfort'. Customers boarding a Brussels Airlines long haul aircraft will have the feeling they are entering a brand new aircraft.” (10-Jan-2012)

Africa provides more monopoly routes on an O&D basis, but the connecting market is very competitive

In part one of our report on Brussels Airlines, we highlighted the significance of its African routes as the biggest element of its long-haul network and as a major contributor to the wider Lufthansa Group’s African presence. Analysis of Brussels Airlines' top 10 routes by ASKs reveals its most important intercontinental routes.

Brussels Airlines is the number one carrier on nine of its top 10 ASK routes and the monopoly provider on six of these. In this respect, when viewed in O&D terms, it has stronger positions on its top intercontinental routes than on its top European routes, where levels of competition are higher. 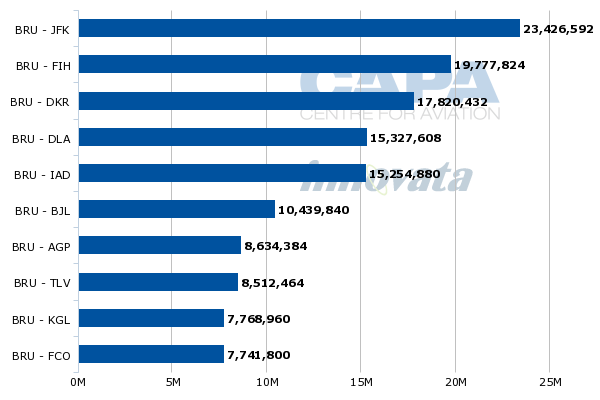 However, if we look at the wider market from Europe to the various destinations served by Brussels Airlines on these intercontinental routes, the competitive landscape appears fiercer. Passengers travelling from other parts of Europe to Kinshasa or Dakar, for example, have a choice of hubs and carriers.

Air France is a significant competitor to many of Brussels Airlines' destinations in Africa and can offer more global destinations to African passengers. The presence of transfer passengers, in addition to those beginning or ending their journey in Brussels, can be important to the economic viability of a route and so increased competition from other hubs could threaten such routes.

Indeed, Brussels Airlines has said its fares and revenue on African routes are being impacted by increased competition from airlines including Turkish Airlines (Bloomberg, 12-Jun-2013). Brussels Airlines CEO Bernard Gustin said the airline had forecast 5% sales growth in Africa in 2013 however it now faces a decline while yields are also under pressure. Mr Gustin said: “Africa is still very strong, but not as strong as we had expected". "Everyone is talking about the new competitors, especially Turkish. We suffer a lot from them.”

Although Turkish is not the leading airline from Europe to Brussels Airlines' key African destinations, it is present in many of them and is growing rapidly into Africa, attracting connecting passengers via its Istanbul hub. In the period Jan-2013 to May-2013, Turkish Airlines grew RPKs to Africa by 42.6% and passenger numbers by 35.0% year-on-year.

Africa provides Brussels Airlines with an interesting niche, but this looks vulnerable to rapidly growing competitors and those that also offer more global destinations to African passengers.

Restructuring plan aims for profit in 2014

In Nov-2011, Brussels Airlines instigated its restructuring plan ‘Beyond 2012-2013’, which aims to achieve EUR100 million in cost reduction and bring the company back to profitability by 2014. This plan sees capacity reductions on the European network, the profitability of which tends to be seasonal, and expansion on long-haul network. As part of the plan, Brussels Airlines reached a new agreement with unions representing the pilots, cabin crew and non-flying staff in Dec-2012.

Mr Gustin said: “We are extremely satisfied that the agreements reached are taking the requirements and interests of all parties into consideration. Union delegates and management have committed themselves to make mutual concessions in order to safeguard jobs and create growth perspectives for our company by significantly increasing our competitiveness”.

The agreement covered measures such as productivity improvement and seasonality, a part-time working regime (for cockpit crews) and a salary freeze until 2015.

But unit costs are still too high

Cost reduction must be the main focus for restoring profitability. 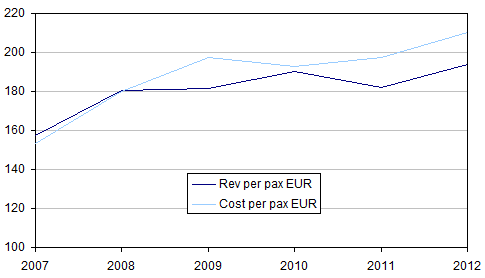 The chart below compares Brussels Airlines’ cost per available seat kilometre (CASK) against average sector length with those of other European airlines. This shows that, while it is relatively cost efficient compared with other Lufthansa Group airlines, it is not among the more efficient legacy carriers and is significantly higher cost than the LCCs. 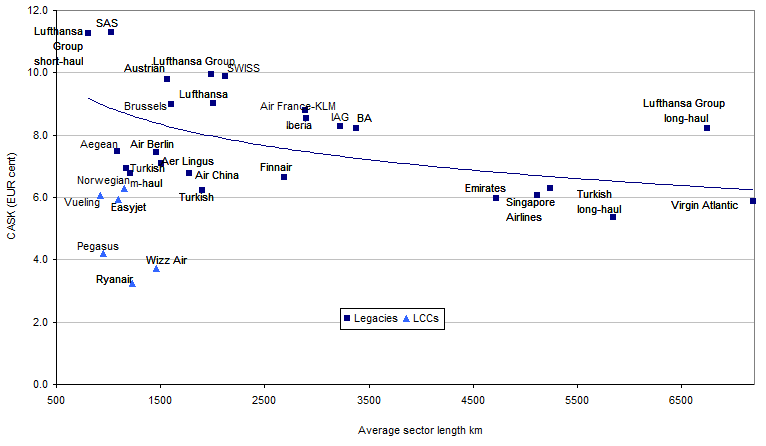 Lufthansa’s call option may not be called

When Lufthansa bought its 45% stake in SN Airholding in 2009 for EUR65 million, it anticipated increasing this to full control once the necessary traffic rights were secured. Lufthansa has a call option over the remaining 55%, which became exercisable in Apr-2011 and lasts until Apr-2014. When the deal was first announced in 2008, Lufthansa said that the price for acquiring all of Brussels Airlines could be as much as EUR250 million, depending on performance-related factors.

There is already considerable cooperation with the Lufthansa Group, including codeshare agreements, FFP integration and an ongoing project to optimise neighbourhood traffic between Brussels and other group hubs.

Lufthansa currently has little to gain from exercising its option and increasing its share of Brussels Airlines' losses.