British Airways (BA) is stepping up its presence in western Africa with a new service to Monrovia Roberts International Airport commencing 05-Nov-2012. Currently only two European airlines operate to Liberia’s capital, Brussels Airlines and Air France, and BA’s new service will indubitably challenge the leading position of Brussels Airlines in the small but high yielding Europe to Liberia market.

Transfer traffic from the US contributes notably to the load and profitability of European services to Liberia, and British Airways with its extensive trans-Atlantic network is well placed to capture a sizeable part of this market. BA's new flight to Monrovia will tag-on to the existing flight from London Heathrow to Freetown in Sierra Leone, which is a former bmi route and is presently operated twice a week with A330 that BA inherited from its acquisition of bmi. BA will operate the new London Heathrow-Freetown-Monrovia route with a smaller capacity Boeing 767-300ER in a three class configuration with 189 seats.

The service will switch from Heathrow’s Terminal 1 to Terminal 5 as BA further integrates the bmi mainline operations and brings them under its own AOC. BA parent International Airlines Group (IAG) finalised the purchase of bmi from Lufthansa Group in Apr-2012 after receiving regulatory approval from the European Commission.

IAG was only interested in bmi’s mainline Heathrow slot portfolio and on 10-May-2012 signed a binding agreement to sell bmi Regional to Sector Aviation Holdings Ltd (SAH) for a total consideration of GBP8 million in cash. The sale includes all bmi Regional's fixed assets and long-term liabilities, including owned and operating lease aircraft.

It could however not find a buyer for bmi’s heavily loss making low-cost subsidiary bmibaby and decided to disband the airline. bmibaby’s last flight took place on 09-Sep-2012, 10 years after it started operations in Mar-2002 from East Midlands Airport.

Central/western Africa is not a core region for BA

Central/western Africa has historically not been a significant region in British Airways’ network and represents only an approximate 1.3% share of its international seat capacity, according to schedules in Innovata for the week of 10-Sep-2012 to 16-Sep-2012. The airline deploys about 11,400 weekly seats to/from central/western Africa, which is comparable to Lufthansa’s capacity to the region but well below Air France, which has a clear market leading position with about 45,500 seats per week. Air France uses 5.1% of its international capacity expressed in seats to/from central/western Africa.

Also, Brussels Airlines has a strong Africa strategy arising from its origins as Belgium’s national flag carrier and the country’s colonial past, and it produces some 21,000 weekly seats to/from the continent. About three quarters of these are deployed on routes to/from central/western Africa.

Brussels Airlines has a leading 24% share of Monrovia Roberts International Airport’s weekly seat capacity, based on data in Innovata for the week of 10-Sep-2012 to 16-Sep-2012. The small airline, in which Lufthansa holds a 45% shareholding and an option to acquire the remaining shares, operates roughly 1,700 seats per week to/from the airport on six flights operated with A330-300 widebodies.

Air France operates approximately 840 seats per week on two weekly return flights to/from the airport. If the French carrier maintains its current schedule through the IATA northern winter timetable BA will offer more seats than Air France, except between 10-Dec-2012 and 04-Feb-2013 when British Airways’ schedule will be reduced to two weekly flights before reverting to three thereafter. 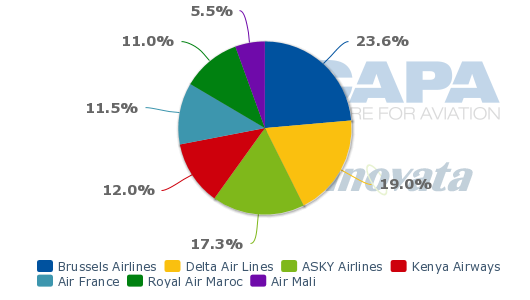 In terms of weekly frequencies, ASKY Airlines takes the lead accounting for 59% of movements at peak times (defined as the hours of 6:00am to 9:00am and 4:30pm to 7:30pm) and 52% at off-peak times. The airline, which is based at Lome-Tokoin Airport in Togo, operates Bombardier Dash 8 Q400s to Monrovia from Freetown and Accra as part of it growing regional network connecting 19 destinations in 17 countries in central and western Africa. ASKY is managed and is partially owned by Ethiopian Airways. It launched services in Jan-2010. 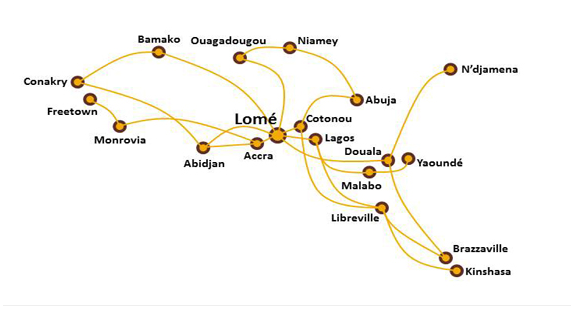 Nearly all services to Liberia’s capital are part of a broader route segment, and it is up to the operating carrier as well as the relevant air services agreement to determine how much of the seat inventory departing from Monrovia is open for sale on the second segment. BA will operate London Heathrow-Freetown-Monrovia, but the airline will not sell tickets for travel purely between Freetown and Monrovia. Air France operates Paris Charles de Gaulle-Conakry-Monrovia and Brussels Airlines operates Brussels-Monrovia-Abidjan. Delta Air Lines, which is the only US airline operating to Liberia, operates from New York JFK to Monrovia via Accra’s Kotoka International Airport in Ghana.

Liberia currently does not have its own airline. The country’s flag carrier, Air Liberia, ceased operation in 1990.

Presently, oneworld does not have any member airlines operating to/from Liberia and BA’s new service to Monrovia will help increase the alliance's footprint in central/western Africa. SkyTeam is the dominant alliance at Monrovia Roberts International Airport with an approximate 43% share of the total seat capacity deployed to/from the airport, according to schedules in Innovata for the week of 10-Sep-2012 to 16-Sep-2012. SkyTeam is represented through Air France, Delta and Kenya Airways.

Star Alliance has a 23% share of the weekly seat capacity at Monrovia Airport through Brussels Airlines. When factoring in ASKY Airlines, which is not yet a Star Alliance member but will likely join the alliance later, the grouping’s share of seat capacity increases to 41%. 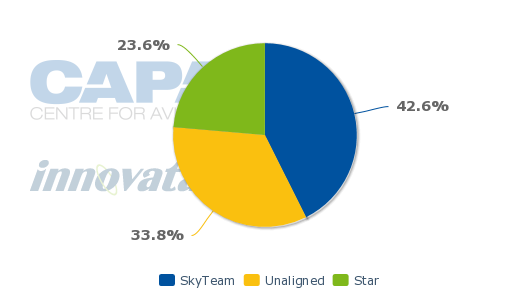 Liberia is a small air travel market. Merely 7,200 seats per week are deployed to/from the country’s main gateway in Monrovia and only part of this capacity is destined for the Liberian market. However, premium demand is strong, as leisure travel is virtually non-existent and demand is driven mainly by the expat community, United Nations and inbound investments as the economy further develops following the peace deal in 2003 and democratic elections in 2005, which ended 20 years of brutal civil war.

Premium seats account for approximately 12% of total seat capacity on offer from Monrovia Roberts International Airport, based on data in Innovata for the week of 10-Sep-2012 to 16-Sep-2012. The worldwide average is 7%. Up to 10% of departing seats from Monrovia Airport are business class seats, which is double the global average. 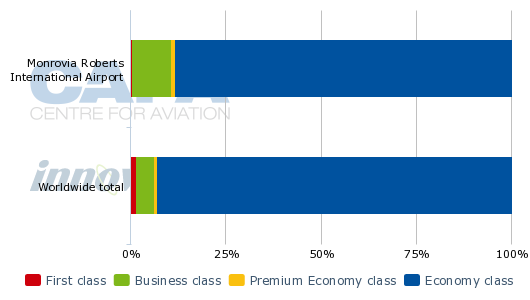 Demand for air travel to Liberia is expected to grow as the country’s economy expands and transitions from post-conflict reconstruction to medium-term growth under the reign of President Ellen Johnson Sirleaf, who won a second six-year presidential term in Nov-2011.

Liberia’s economy recorded its eighth consecutive year of post-war growth in 2011, expanding by 6.4% in the year, according to the International Monetary Fund (IMF). GDP growth is expected to increase to 8.8% in 2012 and moderate to 5.1% in 2013. Economic growth forecasts are buoyed by increasing iron-ore, rubber, timber, and palm-oil exports as well as continuing foreign direct investment. Liberia’s ratio of direct foreign investment to GDP is one of the highest in the world.

British Airway’s network to central/western Africa might also benefit from Air Nigeria’s grounding on 10-Sep-2012 and consequent suspension of its services from Lagos Murtala Muhammed International Airport to London Gatwick. BA already operates a daily service from London Heathrow to Lagos with a Boeing 747-400, but picking up the capacity that Air Nigeria produced to London would increase its competitive position against arch rival Virgin Atlantic.

In a recent interview with The Guardian Nigeria, British Airways regional commercial manager, Africa, Ian Petrie indicated the airline would like to have additional flights to Nigeria.

Air Nigeria, which was previously known as Virgin Nigeria and Nigerian Eagle Airlines, had only begun operating to London Gatwick again in May-2012 after a three-year gap. The carrier previously operated on the route until 2009 when flights were suspended.

On 13-Jun-2012 Air Nigeria’s operations were temporary suspended by the Nigerian Civil Aviation Authority (NCAA) amid safety concerns but the Lagos-London-Lagos service remained outside the scope of the directive. Management decided on 10-Sep-2012 to suspend all operations citing “staff disloyalty” after laying off 800 employees, who reportedly had not been paid since Apr-2012 and had staged protests at the headquarters of the NCAA. The airline’s board has said it plans to resume flying in Sep-2013.

Air Nigeria operated 1,072 seats between Lagos and London Gatwick at the time of suspension of services, according to data in Innovata. This represented an approximate 15% share of weekly one-way seat capacity deployed from Lagos Murtala Muhammed International Airport to London. BA and Virgin Atlantic each account for a 31% capacity share and Arik Air has a 23% capacity (seats) share. While BA and possibly Virgin Atlantic are interested in boosting capacity to Nigeria, such an increase would need approval from Nigerian authorities who may likely first offer the traffic rights from Air Nigeria to Arik or other Nigerian carriers. 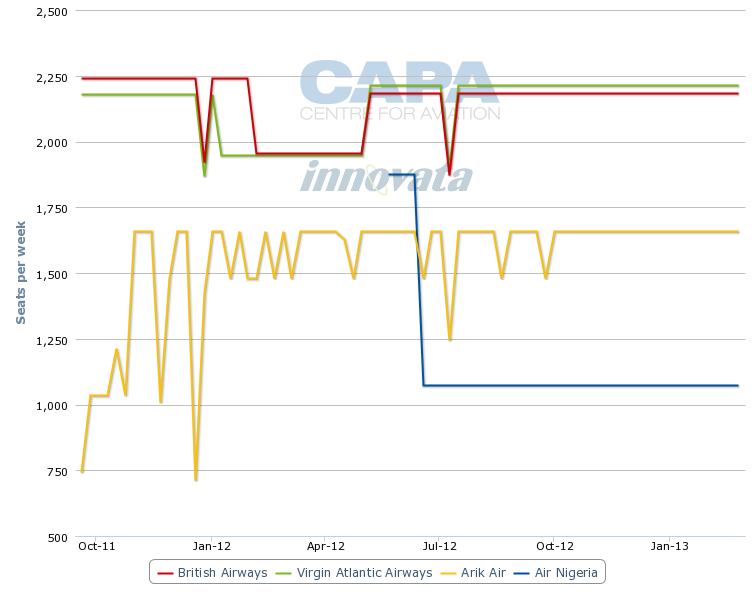 Central and western Africa have thus far not been core to British Airways’ operations and network, but the region offers growth opportunities and yields are still very attractive. IAG, BA’s parent, recognises that traditional patterns should be changed and entering promising markets – like Liberia – that have been the sole playground of competing European counterparts is part of the company's new outlook regarding network expansion.