British Airways has confirmed it is open to a commercial alliance with a relaunched Alitalia, but CEO, has not ruled out such a deal eventually leading to a broader agreement, including a possible stake in the Italian carrier.

Mr Walsh stated, "what we are offering, under current conditions, is a credible collaboration that will leave the Italian company the possibility of deciding its own future in a flexible manner". Alitalia is also being courted by Air France-KLM and Lufthansa, which are seeking up to 25% in the reborn Italian carrier.

British Airways is already seeking mergers with Iberia and Qantas and a trans-Atlantic alliance with American Airlines, but has ruled out SAS as an investment option. The Scandiavian airline's shares fell a further 2.2% yesterday.

BA's shares meanwhile surged another 5.5%, as the break-up of the BAA monopoly on London's main airports got one step closer with the release of the Competition Commission's statement.

Ryanair's shares were up 3.7% on reports of a key legal win over the payment of incentives at Brussels Charleroi Airport. 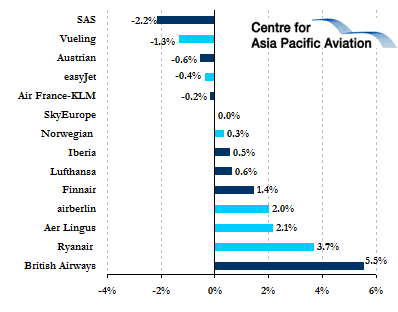